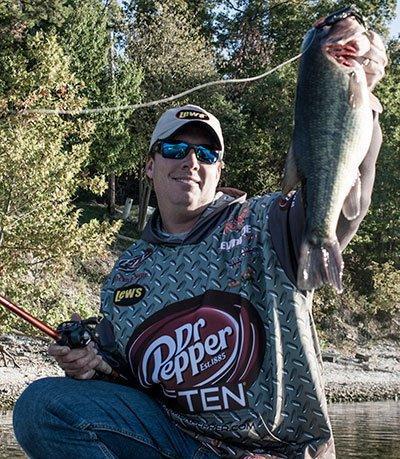 Evinrude pro and Florida native Glenn Browne feels right at home with a flipping stick in his hand. While other anglers may flock to offshore ledges and deep cover during the summer months, he goes the opposite direction by picking apart shallow cover.

Not all fish go to deep water

Browne acknowledges that the majority of summer bass do, in fact, head towards deep water, but that doesn’t mean they all do the same thing. Just as each of us are unique individuals, bass are the same way. His confidence lies in shallow fishing, and he credits his success on fishing his strengths.

“It’s always good to be versatile, but there comes a point when you’ve got to put your head down and do what you know best,” Browne said. “Although there may not be as many bass shallow in the summer as there are deep, you can still get them to bite if you know where they live.”

He also tends to stay shallow during the summer due to a biological phenomenon. After most of the bass have moved deep following their spawning rituals, deep water oxygen levels begin to significantly decrease as the summer progresses. Because bass prefer oxygen-rich water, it’s not uncommon for deep fish to move shallow again.

“When the weather gets really hot in the middle of the summer, both the bait and bass will vacate their usual areas because of poor water quality,” Browne said. “Shallow water oxygen levels increase due to runoff, which is a favorable situation for the bass. Oxygenated water is a must-have, and bass will do whatever’s necessary to find it.”

Get tight to cover

I’ve been in the boat with Browne as he flipped and pitched shallow cover and I’m telling youâ€”he puts his bait into places that many anglers can’t. Effective casting is key to getting both quantity and quality in bites.

“I’ve spent a long time working on my casting skills,” Browne said. “Shallow, summer bass can get pretty wary, so it’s imperative to make a subtle entry into the water. If you splash it on top of their heads, they won’t be very likely to strike.”

During periods of high sun, such as the middle of the afternoon, bass will get much tighter to cover than they will in the early morning or evening. In addition, they become less apt to leave the shade and chase your bait. For this reason, Browne slows his approach and fishes very methodically.

“You need to be precise when the sun is high,” Browne said. “If you pitch your bait to the left side of a limb when a big bass is on the right side, they’re not always going to eat itâ€”they may not even see it. This is why I pick apart cover, whether its laydowns, flooded bushes or stumps. Being thorough will get you more bites.”

Browne keeps his repertoire very simple throughout the summer. If the water is relatively clear, he flips a 4-inch Gambler Flippin Tube in Black Neon Chartreuse on a 5/0 Gamakatsu SuperLine Offset EWG Hook because its spiraling action attracts fish from greater distances. During the summer, he looks to mimic bream and crawfish, and the high contrast of the Flippin Tube is a great emulation of natural bass prey.

When faced with muddy water, he favors a Warrior Baits Quiver Bug on a 5/0 Gamakatsu Heavy Cover Flippin’ Hook due to its straight, conventional fall. Muddy water bass are known to get extremely tight to cover and a straight fall makes it easier for Browne to make ultra-precise casts to key cover.

Heavy tackle is a necessity when flipping heavy shallow cover, so Browne relies on a 7-foot, 6-inch heavy-action Lew’s Team Casting Rod and a 7.1:1 Lew’s Team Pro Speed Spool Casting Reel. When he’s fishing sparse cover, he uses a 5/16 Gambler Tungsten Worm Weight and a 1/2-ounce Gambler Tungsten Worm Weight when flipping into extremely thick cover. For his line selection, he trusts 20-pound Berkley Trilene 100% Fluorocarbon to get big bass in the boat.

Find a river, put the trolling motor down and go fishing

“To be honest, the best thing to do is just go fishing,” Browne said. “If you can run up a river and find cooler water and a little bit of current, there’s a very high change you’ll find a good bass population. I don’t necessarily look for adjacent deep water or any of thatâ€”I just get to work and see where I get my bites. Don’t try to make it too complicated.”

His approach may initially sound broad, but it’s not without reason. Shallow summer flipping is incredibly easy to pattern, according to Browne. If you catch one on the end of a laydown or at the trunk of flooded willow tree, chances are you’ll be able to quickly duplicate your fish catches and get on a great pattern. A lot of times it only takes one fish to tip you off to their current positioning.

To maximize his efficiency, Browne makes several casts in between targets. Even in very sunny conditions, a small, shady spot between cover can hold big bass. Some of his biggest bass will bite while he’s moving from target to target.

“A bladed swim jig is really hard to beat for casting between pieces of cover,” Browne said. “Unlike a spinnerbait, I’m able to skip it really far back under overhangs. It puts off a ton of vibration, so even if the fish are tight to cover, they still may sense the water displacement and come eat it.”

He also keeps his bladed swim jig selection very simple. In clear water, he opts for either a white and chartreuse combination or a green pumpkin color to imitate bream. In dirty water, he has a lot of success on a black and blue color scheme.

Shallow water flipping is a technique anyone can enjoy this summer. You don’t need high-end electronics or a huge assortment of fishing rodsâ€”just some casting skill and a few baits.