When most anglers think of shaky head fishing, they visualize dainty worms, small jigheads and lightwire hooks. There’s certainly a time and place for subtle finesse tactics, but big shaky heads can be deadly throughout the summer months—it’s often referred to as “super” finesse fishing.

Jewel pro Jeff Kriet catches a lot of his best summertime bass on big shaky heads. When other anglers are downsizing their presentations, you’ll often find him doing the exact opposite.

The best times to break it out

Big shaky heads tend to do their best work in deep water situations. Whether he’s targeting sharp drops, points, ledges or humps, there’s one constant variable in Kriet’s decision to break out the big guns.

“The only big shaky head setup I use is a Jewel Super Squirrel Head Jig with a 7.1:1 Abu Garcia REVO MGX and 15-pound HI-SEAS 100 Percent Fluorocarbon, and I love to use it when fishing gets really tough,” Kriet said. “If I’m fishing TVA lakes and there’s a lack of current or if I’ve already beat on a school with a crankbait or a jig, I use a big shaky head as a follow-up bait.”

When you find a solid school of offshore bass and start catching them with a reaction bait, such as a deep diving crankbait, there are times when you’ll just pick up the smallest, most aggressive fish in the school. To get down to the “meat” of the school—the larger, more wary bass—Kriet will reach for his big shaky head.

“It almost acts like a vacuum cleaner at times,” Kriet said. “You get a lot more bites you wouldn’t have gotten on other presentations. When you rig it with a 8-inch Big Bite Baits Finesse Worm, you cut down on some of your smaller bites and appeal to the larger fish in that school.”

When idling over an offshore area with his Lowrance, Kriet looks closely for bass relating to the bottom. If the bass are holding within a few feet of the bottom, he knows it’s prime time for a big shaky head.

“Once you establish fish holding close to the bottom, you want to find some sort of depth change with a hard bottom composition,” Kriet said. “A hard bottom is usually indicative of an irregularity, which will always attract both the bait and bass. Your odds will increase tenfold if you can locate a hard bottom.”

If you have a hard time finding productive offshore areas, don’t fret. According to Kriet, docks are one of the most effective, yet overlooked places to utilize an oversized shaky head. Big bass become accustomed to seeing traditional soft plastic presentations around docks, so differentiating your offering can pay off in a big way.

“A big shaky head has a much different fall than a jig or a Texas rig,” Kriet said. “When you let it fall on a slack line, it has a very natural, non-threating presentation that can trick the big bass into biting.”

Your weight size is much more important than worm color

We’re all a little guilty of getting too caught up in our soft plastic color selection. Instead of over analyzing his color selection, Kriet pays much more attention to his weight sizes, as he’s seen very subtle changes make a huge difference.

Although Kriet’s weight size selection may seem fairly straight forward, he constantly experiments while he’s on the water.

“I’ve caught a 30-pound bag on Lake Falcon in 30 feet of water on just a 3/8-ounce shaky head before—they wouldn’t eat anything but that size,” Kriet said. “Your fall rate is very important with this technique, because a lot of your bites will come before your bait even touches the bottom. You always want to have several different sizes rigged up because depth and wind don’t always dictate your weight size.”

If you see Kriet fishing offshore cover or structure with a big shaky head, you won’t see his boat in the same position for very long. Angles can either make you or break you with this technique.

“You’ve got to keep moving around to find the best casting angle because it can change hourly,” Kriet said. “You’re going to pick off a few worker bees away from the key area, but you’re looking for the juice—you want the mother load. If I’m fishing a point, I don’t want to fish the whole point. I want to fish very specific areas so I can find the sweet spot. You can have 2 juice holes in the same area, but don’t lallygag between point A and point B.”

Following a long cast, Kriet is careful to let his Super Squirrel Head Jig fall on a controlled slack line to discourage it from swinging toward him. After it hits the bottom, he shakes it in place a few times before dragging it slowly to find cover. When he finds cover, Kriet actually tries to get the head hung up.

“When you can wedge the head into a rock or a bush and shake it in place and pop it out quickly, that’s a killer way to get some awesome reaction strikes,” Kriet said. “Just as they’d react to a crankbait, the bass will swarm a big shaky head when they see it pop free from a piece of cover.” 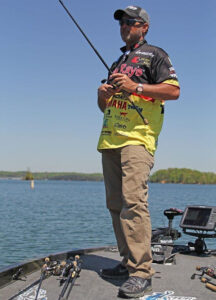 It’s also good practice to pay close attention to what you’re feeling as you drag the big shaky head along the bottom. When you feel something rough, make sure to take a mark a solid point of reference.

“If I feel something scratchy or crunchy when I’m dragging it along, I’ll immediately kick a marker buoy into the water and mark my casting angle with a landmark,” Kriet said. “You’d be surprised at how many schools you can find when you use your shaky head as a depth finder.”

Let it load up

It’s tempting to get a big “thump” at the end of your line and go wild with an immediate hookset, but patience pays a big part in fishing big shaky heads. Kriet has found a way to dramatically increase your hookup ratio.

“It’s important to let your rod load up a lot before you set the hook,” Kriet said. “So many folks will have one thump it in 30 feet of water and just go to town, but even if the line feels tight, you’ve probably got a good bit of slack out. Once you wind down and let the rod load, hit them hard and they won’t go anywhere.”

When the fishing gets tough this summer, whether it’s due to lack of wind, current or high barometric pressure, take Kriet’s advice and tie on a big shaky head. If you know when to break it out and where to fish it and experiment with weight size and cover water efficiently, you’ll have a whole new view on shaky head fishing.