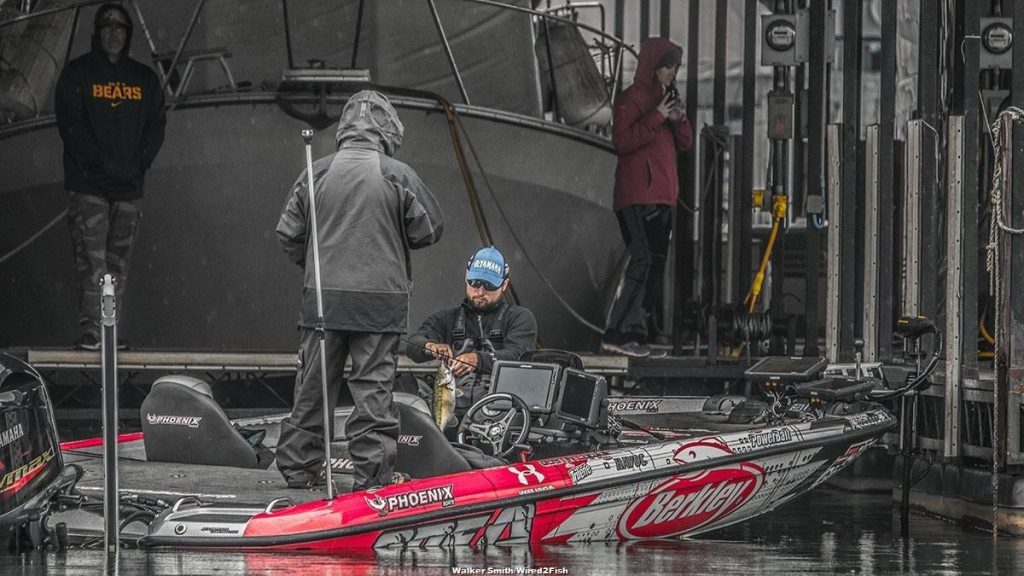 If you’re of the belief that all docks are created equal, you may be robbing yourself of countless bass fishing opportunities throughout the year.

Floating docks, in this case, pose several specific and unique challenges to anglers. Many fishermen are more comfortable flipping, pitching or skipping bottom-contact baits to traditional wooden docks—and to be quite honest, it’s hard to blame them. These docks are often adorned with easily detectable bass-holding features such as ladders, cross beams and long, expansive walkways. In other words, they could easily be considered the “low-hanging fruit” of many fisheries.

That’s exactly why, according to Elite Series pro Justin Lucas, floating docks are largely overlooked throughout the country. Don’t let their unostentatious looks fool you, however—they can play host to enormous populations of quality bass.

Lucas believes there are 6 important guidelines that will help you maximize your efficiency and productivity when fishing these often-ignored hotspots. 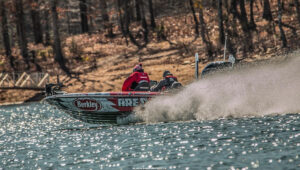 “Thorough” and “successful” are often considered synonomous in regards to bass fishing. If you’re not getting bites, you should slow down and meticulously dissect the areas, right? This is certainly true in some situations, but it couldn’t be further from the truth when fishing floating docks.

“I’ve spent many years experimenting with floating docks and I’ll be totally honest,” Lucas said. “I’ve gotten to the point where I only make one or two casts to a single dock before moving on. 8 out of every 10 bites you get will come in the deepest, darkest pocket of shade and more often than not, they’ll occur on the first few casts. It’s not uncommon for me to fish a floating dock without even deploying my trolling motor.”

Although this seemingly hasty approach may seem a bit overkill to some, it’s important to consider the type of shade floating docks create. The concentration of this shade makes all of the difference.

“Each post of a wooden dock is going to put off a small amount of shade,” Lucas said. “So naturally, the bass have more options in regards to their positioning which makes it necessary to make repeated casts. Floating docks are different. All of the shade is concentrated into a very small area, so there’s not much guesswork involved. You know where a bass is going to be on a floating dock. They’re very predictable.”

Would you rather wrestle a hamburger away from 15 of your neighbors or have it hand-delivered to your doorstep and enjoy it in peace? The answer is simple and, coincidentally, big bass are the same way. They don’t like competition and would rather not fight, scratch and claw when it’s time to fill their bellies.

An added bonus to an already-attractive bank 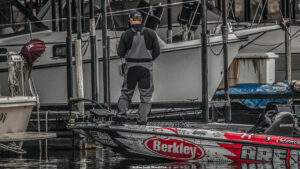 It’s always nice to find a good-looking dock that’s loaded with enticing features. It’s even better to find a quality stretch of bank that has all of the ingredients necessary for a big bass. But according to Lucas, combining the two is an ideal scenario.

“Floating docks can throw you off if you’re not careful,” Lucas said. “Don’t get tunnel vision on the dock-aspect of this strategy. You also need to pay attention to the bank layout and relative location at all times. I view docks as a welcomed bonus to an already-productive bank.”

As you might have guessed, the “perfect” bank changes with the seasons.

Are they suspended or on the bottom?

Deciphering whether bass are suspended underneath floating docks or relating closely to the bottom is an enormous key to optimizing your success. Instead of going through an extensive process of elimination, Lucas relies on a general rule-of-thumb he has developed throughout his career.

“When the water temperature is at its coldest point, you’ll find the large majority of the bass sitting tightly on the bottom,” Lucas said. “This is when proper bottom composition such as rocks, boulders or pea gravel plays a big role. I caught almost all of my fish at the 2015 Bassmaster Classic under one floating dock—it had a rock-covered drop I found on my Lowrance Side Imaging that went from 18 to 33 feet. There would have been fish down there without the dock, but the added shade made it even better.”

As the water temperatures begin to warm throughout the spring, summer and fall, however, Lucas has noticed that the bass tend to suspend underneath floating docks.

“During these times of the year, bass are using these docks for both shade and feeding opportunities,” Lucas said. “The docks’ relative locations remain important, but the surrounding bottom composition doesn’t seem to matter as much. Later in the year you’ll begin seeing all sorts of bluegill and shad underneath the floats, so there’s not much of a reason for those bass to sit on the bottom. They’re not going to leave a five-star buffet.” 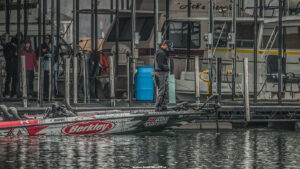 Because most floating docks are found on clear, highland reservoirs, non-committal bass are a common problem for fishermen. You might see several 5-pound bass follow your baits over the course of a day without catching a single one.

So how in the world do you avoid this heartbreaking behavior? There are two essential factors, according to Lucas.

As with any technique, you can locate the best floating dock on the entire lake and not get a single bite if you’re not using high-percentage presentations. Although his selection system is simple, bait and lure choice is a key ingredient to Lucas’ approach.

Don’t let floating docks intimidate you this year. It may take a few fishing trips to become comfortable with this technique, but if you make an effort to follow Lucas’ guidelines, you’ll have some outstanding days on the water.