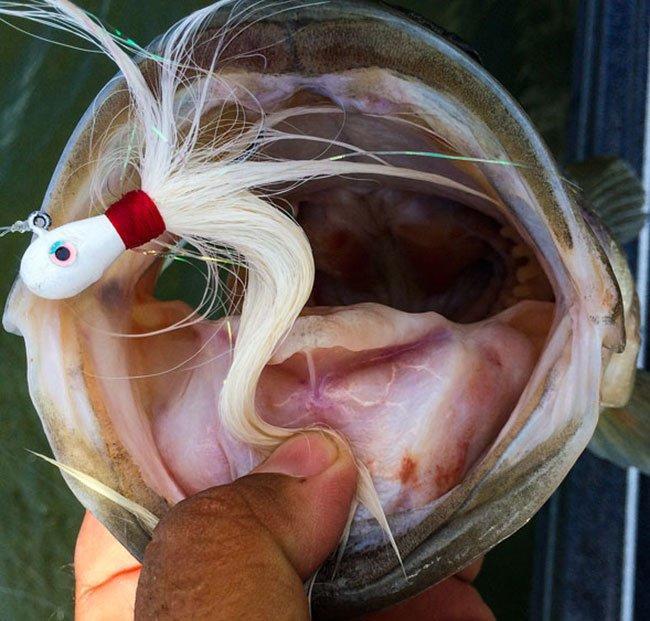 Feathered bucktail jigs have recently re-emerged in the bass fishing worldâ€”and in a big way. Widely regarded as some of the most effective and ignored bass lures on the market, these age-old jigs offer anglers the opportunity to catch big, pressured bass in both deep and shallow water.

FLW Tour pro Scott Canterbury has been a believer in the oft-forgotten feathered bucktail jig for decades. According to him, there are five reasons you need to add this technique to your bass fishing repertoire.

“The bass aren’t wise to feathered bucktail jigs yet, which is a huge reason so many anglers have tried to keep it a secret.”

It’s efficientâ€””These jigs are an outstanding choice when you need to cover large areas in a short amount of time,” Canterbury said. “You can fish them very quickly and aggressively while keeping them in the strike zone and the bass will swim a long way to eat them.”The bass aren’t accustomed to itâ€””When big, deep-diving crankbaits were first developed, anglers couldn’t believe how effective they were,” Canterbury said. “The bass had never seen anything like them which, of course, resulted in ridiculous catches. These feathered bucktail jigs are the same way right now. The bass aren’t wise to it which is a huge reason so many anglers have tried to keep it a secret.”

For the past several years, feathered bucktail jigs have played an increasingly prominent role in Canterbury’s deep water arsenal. While he still chooses to use them in conjunction with other baits and techniques, he believes their durability is indispensable in time sensitive situations.

“When you find a school of offshore bass, it’s always important to keep them fired up,” Canterbury said. “If you get them turned on and you’re chunking a big swimbait, they’re liable to shred your bait and all of the sudden you’re down-and-out for five minutes to re-rigâ€”that’s an eternity in these situations. Feathered bucktail jigs don’t tear up, which allows me to capitalize on active fish without any downtime.”

In addition to their resilience, Canterbury also uses these jigs for their “clean-up” properties. Rarely will he leave a school of fish before giving a feathered bucktail jig a chance to produce.

“This jig will squeeze a few more fish out of the school if you stop getting bit on other baits,” Canterbury said. “It’s extremely subtle and there’s really not much to it, which is what makes it so great. There’s no natural action with these jigsâ€”all the action comes from the angler.”

Effective in both shallow and deep water

Don’t be fooled into thinking the feathered bucktail jig is only effective in deep water situations. Years of experimentation have made Canterbury a big believer in its shallow water prowess as well.

Shallow water shoalsâ€””If there’s current present, you can catch a lot of nice bass with this jig by casting cross-current and allowing it to drift downstream over shallow, rocky shoals,” Canterbury said. “Just keep some controlled slack in your line and let it bounce over any structure. This is a great way to catch bass other anglers totally ignore.”

Schooling bass on the surfaceâ€””Not many people do this, but feathered bucktail jigs can produce some incredible strikes when bass are schooling on the surface,” Canterbury said. “I’ll cast a 1/2-ounce jig past the fish and reel it right on the surface. The hookup ratio is outstanding because you’re not dealing with treble hooks.”

Shell beds and ledgesâ€””If you can find any type of hard bottom composition near main river or creek channel ledges, don’t leave until you throw this jig,” Canterbury said. “It has an exposed hook, but it comes through shell beds and rocks pretty easily. Brush piles, however, can be a bit of a problem.”

While some bass fishing techniques require a fairly steep learning curve, that’s not necessarily the case when it comes to feathered bucktail jigs. Canterbury uses three retrieves for almost every situation. 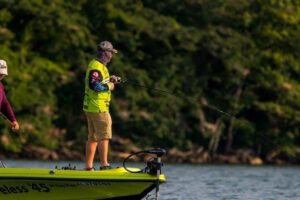 In order to maximize your chances with these jigs, make a concerted effort to pay close attention to the size of nearby forage. While you can expect moderate success when bass are feeding on smaller shad, they’re often at their best when the shad measure 4 to 6 inches in length. For this reason, Canterbury primarily uses a 3 to 5-inch jig.

So how in the world do you figure out how big the shad are? Canterbury watches for three things throughout the course of the day.

There are certainly more popular ways to imitate larger forage such as big flutter spoons and larger crankbaits, but several factors can cause these staples to lose their effectiveness.

“Whether it’s clear water, fishing pressure or bluebird skies, there are times when the bass simply don’t want a huge, intrusive bait,” Canterbury said. “But it’s still important to match the hatch. These big jigs don’t displace much water and they’re silent, so they can be worth their weight in gold if the bass are being finicky.”

If you’re looking for a versatile lure that can catch bass in several situations, look no further than the feathered bucktail jig. By following Canterbury’s expert advice, you’ll quickly become comfortable with the technique and unleash a brand new dimension to your bass fishing arsenal. Rememberâ€”there’s a reason why so many people tried to keep it a secret. 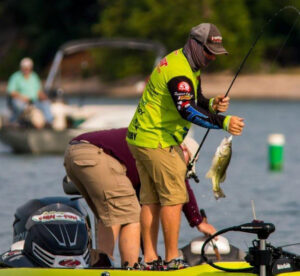