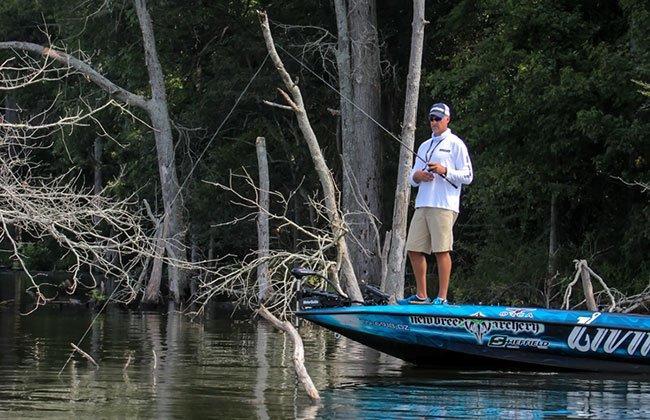 Hot weather, warm water and subpar oxygen levels aren’t necessarily the best ingredients for prime bass fishing action. Compound these factors with a scattered population of transitioning bass and September can be a tricky time for anglers. If you’re having a hard time getting bites, head up the river of your favorite reservoir where the water is compacted and so are the bass.

FLW Tour pro Andy Morgan is a renowned expert at dissecting skinny water. His ability to quickly identify productive areas on the upper ends of reservoirs has played an integral role in his 2013 and 2014 Angler of the Year titles.

According to him, concentrating on these areas can produce consistent numbers of bass when the bite gets tough.

If you follow professional bass fishing, you know Morgan as one of the most consistent anglers in the sport. Many of his competitors joke that he wakes up with a limit of bass in his livewell each morning. A large part of his consistency stems from the areas he decides to fish each tournament.

“In all honesty, the bigger fish actually live on the bottom end of almost every lake we visit,” Morgan said. “But I’ve found that day-in and day-out, the upper ends give me the best opportunity to get bites when it’s tough.”

“In all honesty, the bigger fish actually live on the bottom end of almost every lake we visit,” Morgan said. “The deeper water and bigger creeks give those big bass a major sense of security. But I’ve found that day in and day out, the upper ends offer me a better chance at getting more bites this time of year.” 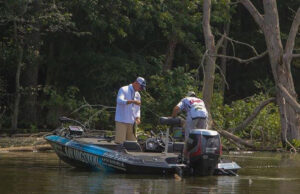 Morgan takes a very simplistic approach to bass fishing and it’s hard to argue with the results. While he believes there is no substitute for quickly covering water, there are a few special things he looks for in addition to what he refers to as “the standard stuff” such as laydowns, logs and vegetation.

Fishing skinny water can be a double-edged sword at times. You’re going to be around plenty of active bass, but a lot of things have to go just right in order to put together a sizeable limit. According to Morgan, these four factors can really hurt the bass fishing action on the upper ends of reservoirs.

There’s no substitute for good casting 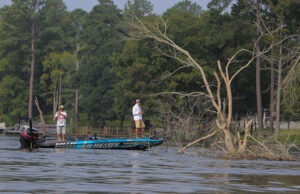 Morgan is one of the most accurate shallow water casters this sport has ever seen, and it’s not by accident. He cut his teeth in the shallow waters of small creeks and rivers and quickly learned the bass didn’t swim from far away to eat his bait. He almost had to hit ’em in the head to make them eat.

“It’s tempting to think the fish in these skinny waters are easier to catch due to less fishing pressure,” Morgan said. “But that’s certainly not the case. I think they’re tougher to fool because you have to make quieter and more precise casts because they’re super spooky in that shallow water. If you miss your target by an inch or make a splash that alerts the fish to your presence, you’re not going to get a bite. I can’t stress the importance of good casting enough.”

If the bass fishing has been tough for you lately, there’s a great chance the upper end of your favorite reservoir can provide you with some much needed relief. If you can find birds and bait while understanding what conditions help and hurt these areas, you’ll have a set of bruised ribs while other anglers struggle for bites.