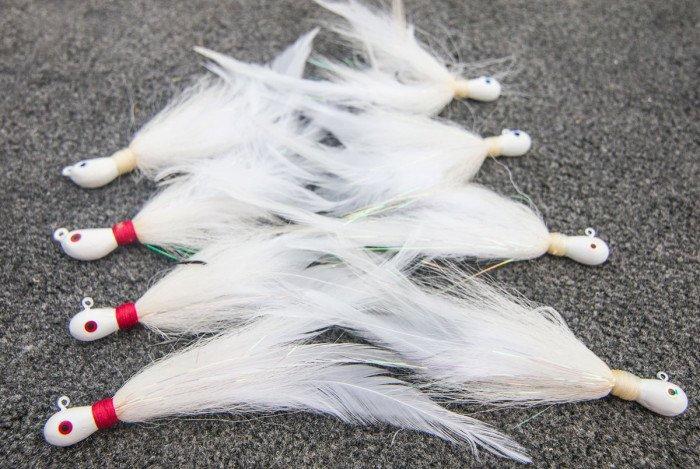 Large custom-tied bucktail jigs with feathers have re-emerged as one of the must-have baits for anglers fishing lakes known for holding large schools of bass on offshore structure. The first of these was called a Preacher Jig. It was tied by a southern preacher down near Eufaula, Ala. in the ’80s, and there were local anglers winning a lot of ledge tournaments on Lake Eufaula on a secret hand tied bucktail and feather jig.

These jigs mimic big shad well and had a subtle but alluring action that the fish in those big schools responded to. Unfortunately the preacher has since passed. Mann’s was making the jigs for a time but quit when demand for them slowed. Now they are pretty hard to come by and guys that had some were keeping them pretty quiet.

Well after this year it got around that a lot of guys were still throwing these, especially on Tennessee River events and now these larger bucktail and feather jigs are showing up again on the market.

One the best one’s we’ve found is one called the Prayer Jig from Cumberland Pro Lures. What’s nice about these jigs is they are very similar to the original Preacher Jigs, but with better components, finishes and hooks. And they are pretty reasonably priced compared to some of the others we’ve seen.

I’ve been fortunate enough to catch a whole bunch of bass on the jigs this summer and here are a few of the things I like about these jigs.

Cumberland Pro Lures has given anglers a lot of options with their Prayer Jig. The jigs come in four sizes including 1/2, 5/8, 3/4 and 1 ounce. This is nice because you can fish the jigs efficiently on shallow structure say 5-10 feet as well as you can in deep structure, 15-25 feet.

They also offer the jig in 4 colors including Shad, White, White with Red, and White and Chartreuse. I also like having a slightly different looking jig as an option. I’ve personally caught a lot on the white with red collars this summer. 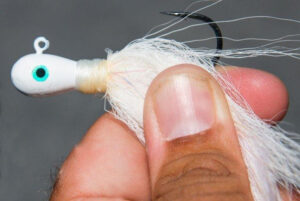 Quality of the build up to par

The heads are shaped right to give the bait a quick-gliding fall back to the bottom. The light wire Gamakatsu hooks are very sharp and give you a good hookup, even on a really long cast and just a quick reel set when the fish might catch you off guard with your rod too high or out of position.

They do a really good job of wrapping the bucktails in place with a very thick solid wrap of thread around the collar. I’ve caught tons of bass on one Prayer Jig and it hasn’t lost a feather or any of the bucktail. It’s nice to be able to catch a lot of bass on a natural looking lure and not have it tear up easily. 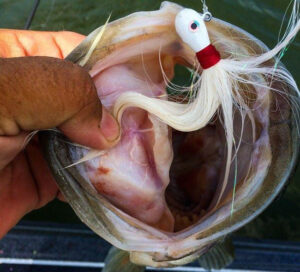 The hooks are sharp and small which makes them penetrate easily. I will vary my retrieves, sometimes with small hops with my rod tip and other times just reeling real quick 4 or 5 times and killing it and feeling it fall back to the bottom. A lot of times when you’re hopping it with your rod, the bite will come right at the top of your hop.

When that happens you can just start reeling fast and winch into them. I landed countless bass just reeling into them before setting the hook. That’s the sign of a good hooking lure to me. Sometimes you will miss fish on the bait. But I feel like that is more in the nature of how the bass are biting. When you get it in a school, the bass are probably real competitive and swirling and swiping at it trying to grab it quick before another fish does. It’s not uncommon to have 4 or 5 bites while hopping it before finally hooking into a fish that bites it the right way.

You can find these jigs on tacklewarehouse.com right now, and soon to be retailers that carry Cumberland Pro Lures products. Here is a short video of the Prayer jig in action: 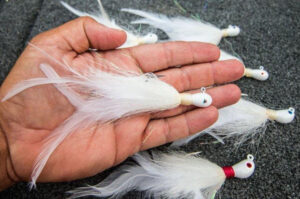