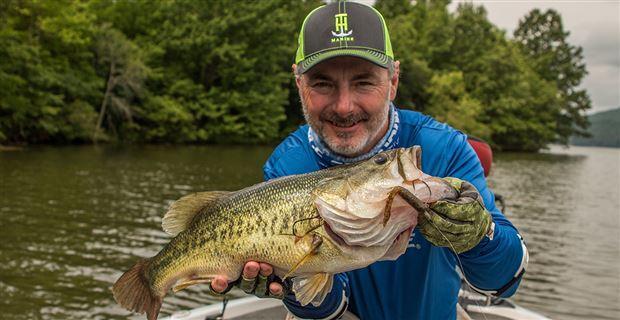 With all of the new soft plastic shapes on the market these days, tubes have largely fallen by the wayside in regards to shallow-water pitching and flipping. They may not always catch the biggest fish in a body of water, but their ability to coax quality keeper bass is grossly overlooked by anglers of all skill levels.

Elite Series pro Mark Menendez believes this comes at our own detriment.

“To my knowledge, a major event has not been won with a flipping tube since I won at Lake Dardanelle in 2009,” Menendez said. “But don’t let that deter you; this dude is an extremely consistent fish catcher and imitates everything from crayfish to bluegill.”

Warming temperatures and increased fishing pressure will likely result in tough fishing conditions on your local fisheries this season. A tube might just be your saving grace in a time when bass bites are scarce.

It creates competition on the fall

Summer bass often feed throughout the night, creating a sizeable lull in the action during daylight hours. They’re full, they’re lazy and unless we do something special to tap into their biological instincts, getting them to bite can be quite the undertaking. That’s exactly where a tube comes into play.

“I will very rarely peg the weight on my Texas-rigged tube,” Menendez said. “This can make it a bit more difficult to pitch and flip, but the competition it creates totally makes up for the minor inconvenience. As the bait falls, your unpegged weight will beat it to the bottom which gives the illusion of a predator (the tube) chasing prey (the weight). It doesn’t seem like a big deal to us, but bass have a hard time watching something else get a nearby meal, so this will spark their competitive instinct even when they’re not on a major feed.” 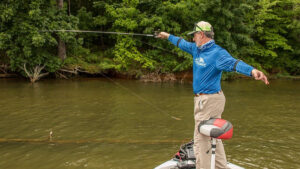 To further add to its appeal, tubes never fall the same way twice. You can predict how your creature bait or beaver-style bait will descend on each cast, but a soft-plastic tube maintains an element of surprise with each individual presentation.

“You never really know what that tube is going to do each time it falls,” Menendez said. “Sometimes it will spin, sometimes it will slide and other times it will dart like a wounded bluegill. An erratic fall is often more likely to target a lethargic bass than a deliberate and slow fall. It’s all about the reaction in this instance.”

When bass anglers think of pitching and flipping, we often invision repeated pinpoint casts and covering water at a painstakingly slow pace. There are certainly techniques and situations that call for such a methodical approach, but thanks to its unique action, a tube isn’t one of them.

“You’ll get the large majority of your tube bites on the initial fall,” Menendez said. “That’s solely due to its tantalizing fall. I don’t see much need in dragging your flipping tube for several feet at a time before making another cast. Instead, I’ll hop it three or four times next to a piece of cover and immediately take it to the next target.”

Implementing this rapid-pace presentation strategy throughout an entire day of fishing will save a considerable amount of time and allow an angler to make hundreds more high-percentage presentations, thus increasing the probability of getting more bites.

With the right hook, your hookup ratio is excellent

Unlike many pitching and flipping soft plastics, tubes require specific hooks in order to increase your hookup ratio and eliminate line twist. Menendez has been using a particular type of hook for years and whenever he sees them available, he buys in bulk. 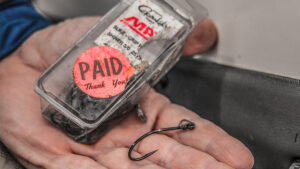 “It’s a 5/0 Gamakatsu kale-style hook,” Menendez said. “It was originally marketed under Ohio Pro Lures and it’s ridiculously hard to find anymore. When you get really lucky, you’ll run across a few packs. It’s similar to a minnow hook and it’s not a wide-gap hook. If you can’t find ‘em, just make sure the point of whatever hook you use points directly to the top of the head and you’ll hook ‘em every time.”

Bites are often detected by your line swimming the opposite way—not always by feel—and the hookset is not your traditional Texas rig hookset.

“You don’t need to lay the wood to them when it comes time to set the hook,” Menendez said. “Simply lift your rod tip and start reeling and they’ll be pinned in the top of the head.”

Effective in both clear and stained water

A few simple adjustments can make a flipping tube effective in nearly every water color you can imagine. Regardless of your location, you can expect consistent success with these special soft-plastic baits.

“Keep your color selection very simple,” Menendez said. “In dirty water, I’ll use a red flake-colored Strike King Coffee Tube and in clear water I’ll rig a green pumpkin Coffee Tube. You can also catch big bass around the shad spawn by swimming a solid white tube high in the water column. But that’s it; those three colors will work everywhere you go.”

In especially dirty water, similar to the conditions he faced to win the 2009 Dardanelle event, Menendez will insert a small glass rattle into his tube. Not only does this help the bass locate his offering, but it also mimics the clacking sound of a live crayfish.

As a general rule, if a piece of cover is shallow and looks like good bass habitat, it deserves a few pitches and flips with a tube. More specifically, however, Menendez has four primary targets he looks for when fishing in the summer months.

Isolated cover
“This is an absolutely fantastic bait for any type of isolated cover,” Menendez said. “Whether it’s dock pilings, willow trees, shallow stumps or small stretches of bank grass, you owe it to yourself to put a tube near it.”

Channel swings
Menendez heads to the backs of major feeder creeks and searches for the last bit of verticality and hops a tube from shallow to deep water. Essentially, he’s looking for where the last deep water touches a shallow flat. These areas provide summer bass with an opportunity to hang out in deeper and more comfortable water until they’re ready to move into the shallows to corral an easy meal.

Riprap
“Rocky banks are always a stellar place to find concentrations of bass and it’s no different in the summertime,” Menendez said. “Crayfish are easily found in and around riprap and a tube is a near-perfect imitation of one.”

Current breaks
Tubes are hugely effective in river systems and the reasoning is simple: Most river prey is much smaller than that of a large reservoir and a tube has very similar profile. Menendez targets anything that protrudes into the current—logs, rocks, etc.—and creates a break in the current, otherwise known as an eddy. These areas create an outstanding ambush point for hungry bass as they can position in the slack water and attack unsuspecting prey as it travels with the current.

Think outside of the box this summer and don’t get completely stuck on your traditional soft plastic shapes. Grab a few packs of tubes and a flipping rod—you’ll catch a lot of bass that other anglers are leaving behind.