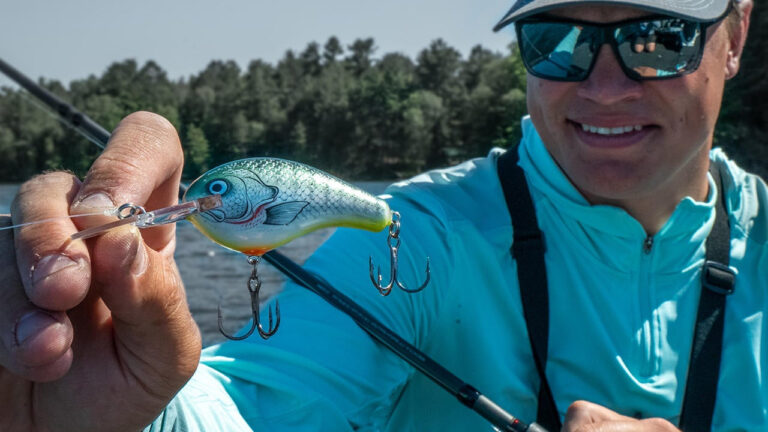 Wired2fish’s Mitch Anderson shares some compelling reasons to have a crankbait tied on during the summer months on grass lakes. Think about this for a second – most moving baits, ChatterBaits and swimbaits to name a few, sink on the pause, which can be detrimental in the grass. On the other hand, most crankbaits float on the pause, allowing them to clear weeds and stay squarely in the strike zone. Here are Mitch’s recommendations for using crankbaits to cover water and locate bass on grass lakes.

1. Use crankbaits as a search bait on grass lakes. Many lakes have heavy weed growth throughout shallow and mid-depth areas. There’s suitable habitat pretty much everywhere in this scenario, so bass commonly spread out during the summer months. A moving bait is the most efficient way to locate fish. Anderson often prefers a crankbait over other moving baits for its ability to be fished fast and sheer fish-triggering qualities. Also, unlike sinking lures, it stays up in the water column where active bass often feed.

2. Choose a buoyant crankbait made of balsa wood. Buoyancy matters a lot here – you’re goal is to select a bait and line combo that allows you to tick the top of the weeds. Fowling will happen, but it happens a lot less with a highly buoyant bait. Anderson prefers balsa crankbaits in this scenario, which are usually a faster float than comparable plastic varieties. Like contacting wood or rock, make sure to vary your retrieve, mainly when your bait contacts grass. Doing so allows the bait to float up and clear the weeds (reduces fowling) while implementing a speed and direction change – both are key triggers.

3. Make shorter casts. Short casts go against conventional crankbait fishing wisdom but pass the common sense test. Whereas when you’re cranking clean bottoms and trying to hit a particular structure, long casts are imperative to keep your bait in the strike window for the longest time possible. You’re going to fowl when fishing grass, so you’ll end up blowing a lot of casts by snagging weeds at the end of a long cast. Similarly, hook a bass with a trebled bait and lighter fluorocarbon line at the end of a cast, and you’ll struggle to maintain the fish up and out of the weeds. Instead, make more short to mid-range casts. You’ll have better depth control of the bait through rod angle manipulation and fowl much less.