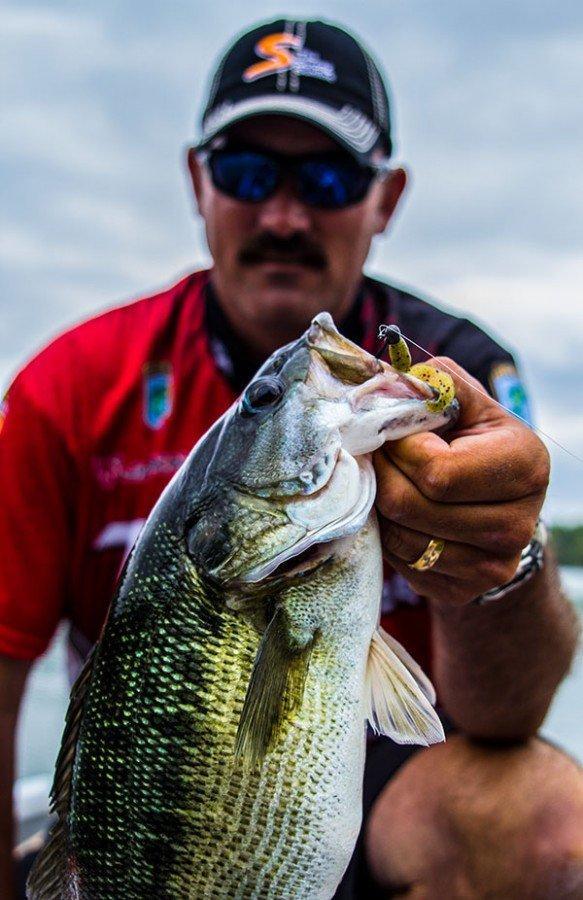 Spring bass have a reputation for being especially gullible throughout the spawn—it’s a welcomed occurrence for anglers after enduring a long, brutal winter. As the spawn begins to die down, however, and the last waves of spawners move onto sandy, shallow areas, they can actually become a bit difficult to catch. After being relentlessly pursued for weeks on-end, these wary bass become wise to our tricks.

Tackle Warehouse pro Jared Lintner has found a way to overcome suspicious late spring bass. For the past 2 years, he has been using an ultra-finesse technique that has fooled countless giant bass—he calls it the “micro bass grub”. With a basic understanding of when, where and how to use it, you can make the most out of tricky late spring bass fishing.

At one point or another, most of us have caught bass on soft plastic grubs—many of us have probably caught our first bass on it. If you thought that was a finesse technique, Lintner’s technique will make it seem like power fishing.

When rigging his micro grub, Lintner uses a 3/32-ounce Keitech Super Round Tungsten Jig Head for calmer conditions and a heavier 1/8-ounce model for easier casting in breezy conditions. If he’s around particularly large bass or thick cover, he prefers a Jackall Weedless Wacky Jig Head due to its thicker hook and small weed guard. Lintner maintains his ultra-finesse mindset when selecting an appropriate soft plastic bait.

“Don’t be afraid to throw a really small bait with this technique,” Lintner said. “I like to use a 1-inch or 1 1/2-inch Yamamoto Single Tail Grub. They’re loaded with salt and have an excellent swimming action. In reality, you can use other tiny grub models, too, but I have the most confidence with the Yamamotos.” 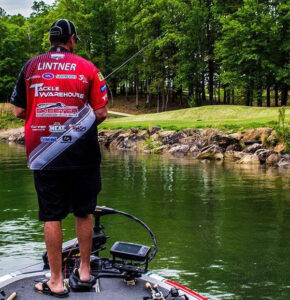 When the fishing gets tough, Lintner turns to his micro bass grub in areas likely to hold both bass and bream beds—shallow, sandy flats. As he approaches these areas with his trolling motor, he keeps an eye out for any white spots on the bottom. These spots are indicative of bass and bream beds, which make them prime candidates for the often-overlooked micro grub.

On popular, heavily pressured fisheries, the majority of anglers power fish with big, bright-colored baits and heavy line. Lintner is a staunch believer that late spring bass get accustomed to these techniques, which lets him take a totally different approach with the micro grub.

“When I’m faced with bass that have been bothered by big, bulky tackle for the entire spring, the micro grub allows me to show them something they’ve probably never seen,” Lintner said. “Basically, if I see a late spring bass on bed or a big bass hovering around a bream bed, it won’t take more than 2 casts to catch them with this technique.”

The biggest key to effectively utilizing the micro grub is making the longest casts you can possibly make. Because Lintner most often uses this technique in clear water, heavy pressure situations, the bass will easily spook if you get too close.

“I like to keep my trolling motor on a fairly low setting and stay far away from the fish,” Lintner said. “Once I get my boat into position, I always want to cast past my target. Whether I’m casting to a visible bed or simply blind casting to shallow cover, I don’t want the grub to plop down on top of the bass.”

Following a long cast, Lintner lets the Single Tail Grub do most of the work. Reeling just fast enough to keep a small bow in his line, he’ll incorporate an occasional twitch or pause as the micro grub rig nears pieces of key cover. He uses extremely light tackle for this technique, so a strike isn’t difficult to detect. 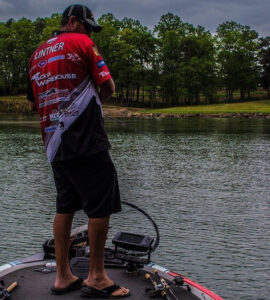 “Whenever you get a bite, you’ll know it,” Lintner said. “Most of the times you’ll feel it in your line, but I’ve noticed a similarity with a lot of the bigger fish I’ve caught on it—a lot of times you’ll just see your line slowly swimming to the side. You don’t want to go crazy on your hookset with such light tackle, so just reel and smoothly sweep on the hookset.”

Conditions to look for

Because the micro grub technique calls for such a lightweight jig head, wind is not necessarily your friend in this case. A slight breeze, however, is a very different story.

“I like sunny conditions with a small ripple on the water,” Lintner said. “Too much wind will not only mess up your casting, but it will also hinder your ability to feel the bait, which is a big deal when fishing the micro grub.”

If you’re faced with cloudy conditions, don’t give up on the micro grub altogether. Although the location of bass may not be as easy to predict with the decreased visibility, it also doubles as an effective search bait, too.

“This rig isn’t as easy to use in cloudy conditions, but it will still definitely catch fish,” Lintner said. “I’ll just get on sandy, shallow flats and fan cast it to probable bedding areas—they’ll still bite it.”

According to Lintner, there are two key factors to your equipment selection for throwing the micro grub—a high-quality rod and excellent line. Due to its fast taper and powerful butt-section, Lintner exclusively uses a 6-foot, 8-inch medium-light action G. Loomis GLX Spinning Rod.

When it comes to his reel and line selection, he trusts 6-pound Sunline FC Sniper and a Shimano Sustain Spinning Reel.

“I’ll definitely take my chances with the light tackle,” Lintner said. “I’ve caught fish up to 12 pounds on the micro grub around heavy cover. If you just hold steady and avoid getting in a big hurry and horsing them in, they usually swim away from cover. They’ll initially want to go in there, but if you just hold pressure on them, they’ll come right out and you’ll get ‘em.”

Regardless of the conditions, Lintner keeps his grub color selection very simple. Because of the abundance of small baitfish and bluegill that inhabit the shallows during the spring, he chooses natural colors.

If you’re dealing with spooky, stubborn fish this spring, break out the lightest tackle you have and try the micro grub. Although it may seem dainty, your opinion may be changed when you see the fish it will catch.