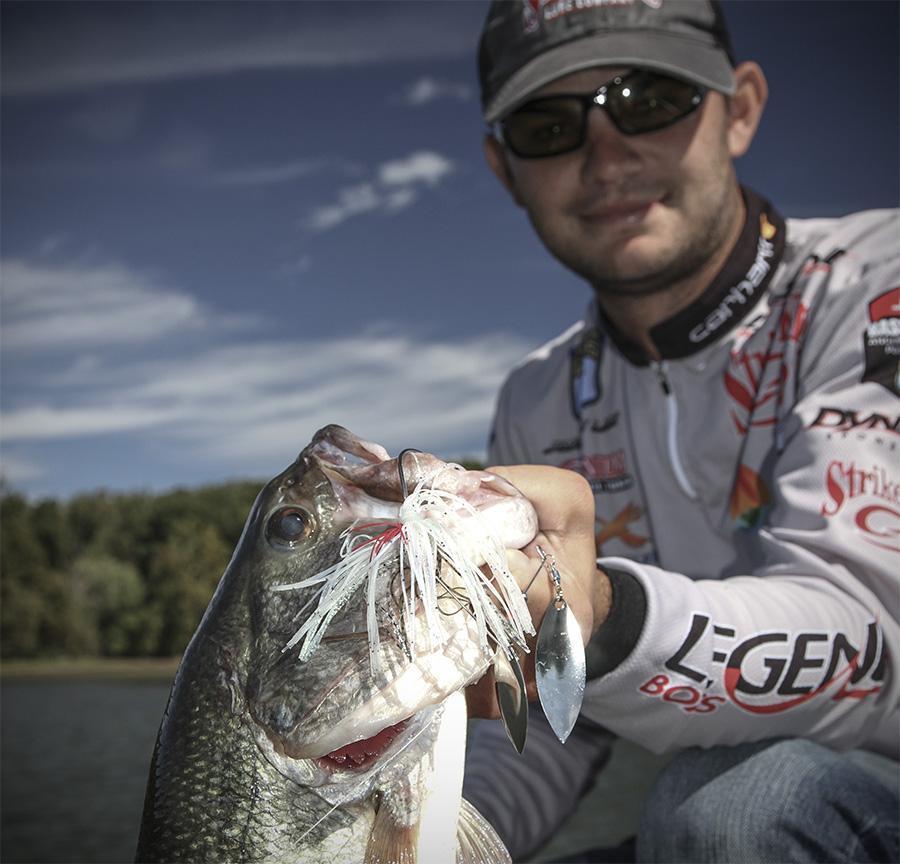 Don’t expect the same ravenous feeding you often find during the prespawn, but these thin-bellied bass know they need to get back on the calorie train, so they will eat. You just have to offer the right meal the right way.

Certainly, those main lake points and humps just outside the spawning pockets will see some post spawn staging; but let’s not overlook the shallower stuff that the fish utilize earlier in this season.

Be it wood, water willows, docks or riprap, Bassmaster Elite Series pro Jordan Lee looks for two main features; he seeks solid structure and quick access to deeper water. Let’s look at how to tempt the fish that park their backsides here.

“I don’t think these fish just spawn and then pack their bags and head out deep. I think that a lot of the recovery time is spent in shallow water, and that comes into play with what I like to do.

“You get that trolling motor set as high as you can and just ease around the spawning flats. Once they’ve spawned, I think they get around some type of cover and just hang out and wait for something to come by them.”

When things go as planned and post spawners are snapping, Browning covers water with a one-two punch comprising a 3/8-ounce Z-Man Chatterbait paired with a RaZor ShadZ trailer and a 3/8- to 1/2-ounce War Eagle spinnerbait. Keep moving and look for pockets of active fish.

Lee’s bait of choice is a Strike King Heavy Hook Swim Jig with a Strike King Rage Tail Menace trailer, but he’ll mix in some frog action—especially around grass.

It’s nice when the big girls put on the feedbag, but expect a few bad-hair days during the post spawn period. At the onset, it’s simply that transitional grumpiness we mentioned earlier. However, Lee points out that lake conditions can also impact the overall vibe.

“When the water’s down on a lake that has a lot of shallow cover definitely makes the bite tougher,” he said. “And when there’s not a whole lot of current on a lake that has current, those fish are not really wanting to go deep either.”

In these scenarios, or anytime post spawners get funky, Lee will turn to a big worm or a football head to keep a big, obnoxious presence in the fish’s face. Browning takes a similar approach; only with a different tool. He likes a Live Target C-64 crankbait, which runs the 3- to 5-foot zone.

“I like this around a little bit deeper cover like wood and rock; someplace where you have to make multiple casts,” he said. “I think that’s where most people miss the boat. During the post spawn, they’ll go to a piece of cover and throw just a couple of times and keep going.

Picking on the already cranky fish, Browning said he’s counting on an aggravation bite. Call it a vengeful version of the traditional reaction bite.

Part-2 of Browning’s tough post spawn strategy is to locate secondary points in about 3-5 feet and drag a Carolina rig. He finds a 3/4-ounce weight is plenty, and a 2 1/2- to 3-foot leader provides sufficient separation.

“I like the Z-Man Turbo CrawZ, and I just get out there and drag the old ball-and-chain,” Browning said. “Especially where you have some hard bottom like shell or even pea gravel, this works really well.”

“They tend to float a little and look up in the water column in a true post spawn mode,” Marks said of those tougher days.

Be out there early

Browning stressed the importance of being out there at daybreak. That first light, coupled with cooler temperatures will make even the grumpiest post spawner open her jaws.

“Normally, you’re going to have a lull from from about 9:30 a.m. until about 12:30 or 1 and then it will start picking up again,” he said. “So just be patient and fight through that middle part of the day, but make sure you’re on the water when that sun cracks because that’s very, very important.”

Lee agrees and notes that the widest window of post spawn opportunity often has the narrowest opening.

“The shad spawn is a really big thing to look for first thing in the morning,” he said. “You have to be out there early because sometimes it only lasts 20-30 minutes, but you can catch a bunch of fish early.”