It happens to the best of us—you get the rare chance to go fishing during the workweek and absolutely wreck the bass. A limit easily weighing 25 pounds is enough to make you jump into Saturday’s derby with every expectation of winning. When tournament time rolls around, however, your fish have moved and you’re left scratching your head and scrambling to catch a modest limit.

Early spring bass tournaments give anglers the opportunity to catch a lot of big bass, but as the bass frequently change throughout this time of year, 2012 Forrest Wood Cup Champion Jacob Wheeler is a big believer in quick thinking and effective decision making.

Get a feel for the lake

When deciding whether to milk an area or adopt a run and gun strategy, Wheeler carefully considers the type of lake he’s fishing. While some lakes are conducive to weeding through 2-pounders to get to the bigger, more tournament-worthy fish, other fisheries are wired differently.

“I’ve found that the Tennessee Valley Authority lakes such as Kentucky Lake and Guntersville are the types of fisheries where it’s okay to sift through smaller fish,” Wheeler said. “The bass in those lakes school by the thousands, with both big and small bass schooling together. On smaller reservoirs, however, you won’t always find many big bass mingling with the peanuts.”

Throughout the spring, Wheeler cautions anglers against getting too hard headed after a solid practice period. Prespawn bass can be easy to pattern, but with so many ways to catch them—shallow, deep, on bed, etc.—he prefers to keep a very open mind regardless of his success in practice.

“In early spring bass tournaments in particular, you always hear about guys whacking ‘em in practice and then weighing in 8 pounds each day of the tournament,” Wheeler said. “That happens because they got too caught up in what the fish were doing a couple days ago and weren’t flexible. These fish move around constantly, so I always want to have my eggs in different baskets instead of solely committing to one area.”

Let the fish clue you in

So you’ve found a good group of fish in practice, but now what? How do you know whether or not to take a chance and grind it out for 5 solid bites on tournament day? Wheeler lets his fish do the “talking”.

“It’s basic—to an extent,” Wheeler said. “If you’re finding fish in the mouth of a spawning flat, more than likely those schools of fish will keep coming toward you. If I’m catching fish that are very pale, that immediately tells me the fish are coming to me from deeper water and will continue to do so.”

When bass are pale in color, it usually means they’ve just moved up from their deep, wintertime homes to begin staging for the spawn. As they sit in deep water throughout the colder months, the decrease in light penetration at deeper depths causes them to lose pigment.

“Big, white-colored bass are an awesome sign during the prespawn,” Wheeler said. “Take that as the fish telling you, ‘Hey man, I’m ready to chow down’!”

Conversely, dark green bass are a telltale sign of “resident” fish, or fish that have been shallow long enough to gain more pigment from the sunlight.

“If I’m catching really dark-colored bass in practice, I’m more apt to use a run and gun strategy,” Wheeler said. “Those bass have been shallow for a while, which means there may not be fresh schools pulling up on a regular basis. When the area isn’t replenishing, it’s going to be tough to rely on it for consistent big bites—especially in a multi-day event.”

Should I stay or should I go?

Tournament strengths and weaknesses vary from angler to angler, but Wheeler acknowledges his level of discomfort when staying in one area for an extended period of time.

“It’s really tough for me to stay put in one area,” Wheeler said. “Plenty of guys like to do that, and I can, too if I’m absolutely certain there’s a bunch of big ones around, but it scares me to stay too long. I’ll give it 20 or 30 minutes and I’m out. I’ll go rotate through some other areas and come back in a couple of hours.”

At the most recent FLW Tour event on Smith Lake, Wheeler had multiple patterns that were consistently productive, but he let the conditions dictate his game plan. His most solid bites came when he threw a jerkbait, but it would quickly fall apart without lowlight conditions or wind. Whenever the sun got high and the water was calm, his decision making ability played a major factor.

“I had to decide whether or not I should force the bite or abandon ship and make an adjustment,” Wheeler said. “Ultimately, I decided it would be best to get my bait in front of as many active fish as I could, so I went to stained, shallow water and filled my limit in 30 minutes on a Rapala No. 5 Shad Rap.” 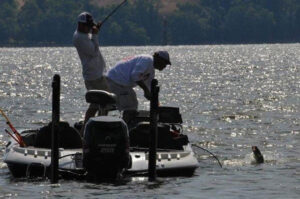 Every lake is different, but one thing usually holds true once the bass invade prespawn areas—they won’t move far. For this reason, Wheeler has adopted a generic prespawn tournament strategy that has produced for him all over the country.

“If I got a bunch of good bites in an area during practice, I’ll generally give it about 45 minutes before I start plotting my next move,” Wheeler said. “After 45 minutes without any good bites, I’ll try to find them in adjacent shallow water areas for 15 minutes. If I still haven’t found them, I’ll slide out and target nearby break lines for about 15 minutes. If they don’t show themselves by then, I’m gone.”

“Gone” is a relative term in this case. Even after the most brutal cold fronts, bass usually won’t vacate their prespawn areas and head back to their deep, winter dwellings. Wheeler will fast-idle a surrounding 300-yard area while keeping a close eye on his electronics. Many times he’s found his previous school of bass in areas adjacent to their original hangouts. When that happens, it’s game on.

“I never panic when my prespawn fish don’t show themselves right away,” Wheeler said. “Just idle around and you’ll find them. When you finally locate them, they’ll probably bite the same baits you were catching them on during practice, so stay calm.”

When prespawn bass get on shallow water structure, such as flats, it doesn’t always mean they live there all day, every day. If you notice yourself getting flurries of bites in short spurts, there’s a definite reason behind it—you’ve run across them during a short feeding window.

“If I know there’s big fish in or around a typical prespawn area, I never leave the area without coming back to check on it periodically,” Wheeler said. “If you don’t catch them on your first rotation, it simply means they’re not actively feeding. During this time of year, you can hit an area and not get any bites and then come back in an hour and catch a 20-pound sack. That’s the beauty of the prespawn.”

As you shake off the last of Old Man Winter and the bass start getting ready to spawn, don’t let their nomadic prespawn behavior get the best of you. If you can spend a couple of days getting a feel for the lake, pay attention to the bass’ color and adopt a time-friendly tournament strategy, you might find yourself cashing in some hefty checks this spring.