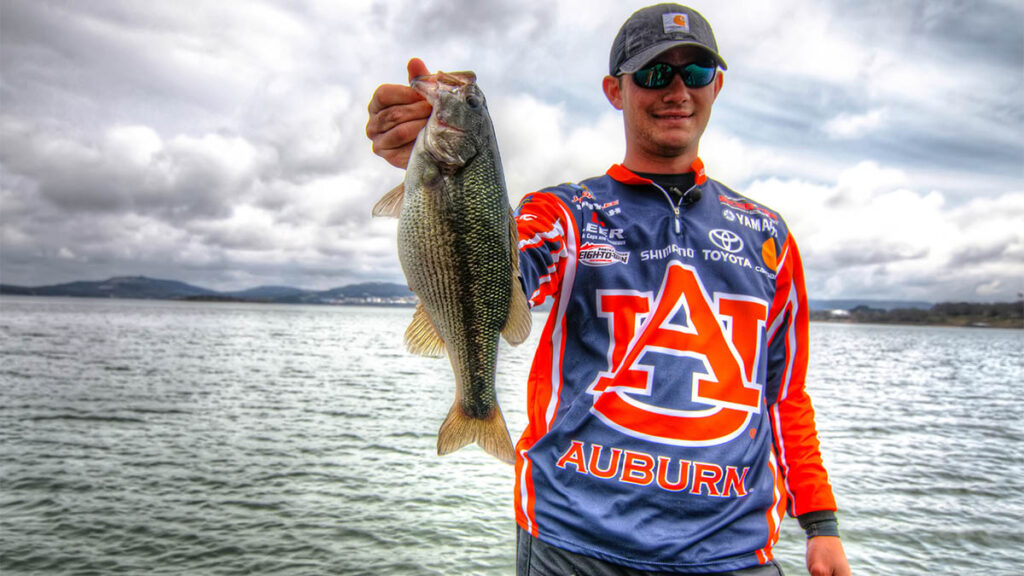 Prespawn bass fishing gives anglers the opportunity to catch the bass of a lifetime. While this time of year is widely synonymous with reaction baits and hurried presentations, never overlook the effectiveness of a football jig.

You’ll rarely see 2014 Bassmaster Classic Qualifier Jordan Lee without a football jig within reach throughout the early spring. When the bass won’t fall for a well-placed hard bait, these deep water jigs can cure even the toughest cases of lockjaw.

According to the young standout angler, there are a few things you need to know about this technique in order to increase your catch.

If a crankbait won’t cut it, a football jig will shine

Many anglers’ first instinct is to pick up some sort of reaction bait such as a crankbait, lipless crankbait or jerkbait when faced with prespawn conditions. You’ll get a few bites using these fast-moving presentations, but Lee prefers a slower, more deliberate approach with a football jig for two primary reasons.

“Throughout the very early spring when the bass are beginning to come out of their winter patterns, you have to remember how sluggish they are,” Lee said. “Their metabolism is still fairly slow due to the colder water temperatures and they’re looking to get the biggest meal they can while exerting as little energy as possible. Instead of burning energy chasing down a fast-moving lure, they’re more apt to eat a slow-moving football jig.”

In addition to the bass’ lethargic behavior, Lee also utilizes a football jig to take advantage of their biggest prespawn weakness””crawfish.

“In the early prespawn, crawfish are to bass like filet mignons are to humans,” Lee said. “When they see a football jig ticking across the bottom, emulating a crawfish, they can’t help themselves. Crawfish become very active this time of year and the bass know it. They’re easy to catch and plentiful in most fisheries, which makes a football jig extremely effective.”

Like many bass fishing techniques, it’s imperative to cater the speed and style of your football jig presentation in accordance with the activity level of the bass. This time of year, their behavior is largely dictated by water temperature, according to Lee.

Look for a hard bottom composition 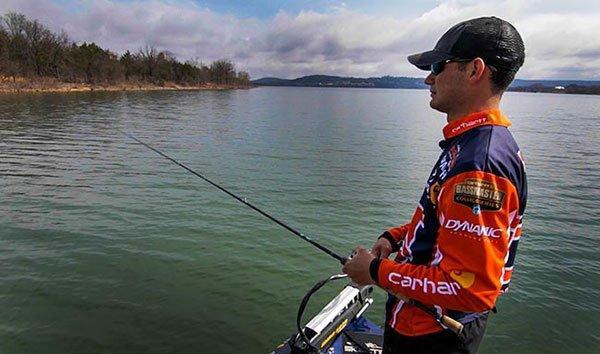 Even on prominent grass fisheries such as Lee’s home lake of Guntersville, he stresses the importance of locating and identifying areas with a hard bottom composition. Not only will these areas allow your football jig to work its magic, but they also play host to a bass’ main concern””food.

“You’ll have much better results fishing a football jig along a hard bottom,” Lee said. “The pointed edges of the jig allow it to tumble over and kick off rocks, creating a bunch of enticing commotion in the water. More importantly, however, these are areas that crawfish and bluegill frequent throughout the early spring. The bass are there to get fat and they turn into very indiscriminate feeders.”

Although your odds will drastically improve by finding these hard bottom areas, the ability to effectively locate nearby irregularities and transitions will shoot them through the roof.

“Bass love edges and irregularities,” Lee said. “If you’re fishing down a straight, pea gravel bank and notice a transition to slightly larger rock, that’s where the bass are going to be. You’ll pick off a few fishing other areas, but you’ll find the largest congregations of bass around any type of transition.”

Throughout his travels throughout the country, Lee has found glaring similarities between the large majority of fisheries. He believes prespawn bass can be quite predictable, so he makes a concerted effort to find these three types of areas.

Let ’em talk to you:

Each time you catch a fish, make sure to look in its throat before safely releasing it. You’ll often find crawfish pincers or tentacles. If that’s the case, take it as a clear sign to break out the football jig.

Use it to saturate productive areas 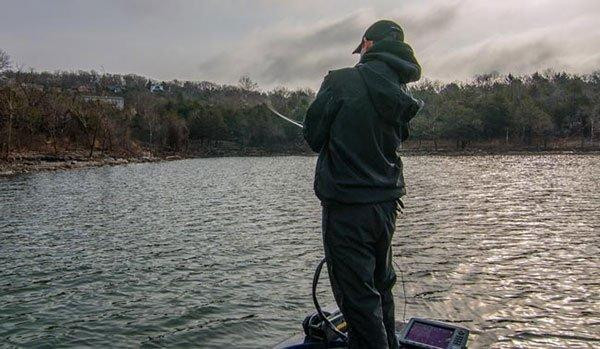 We’re all very guilty of it to some extent””we fly down a stretch of bank, catch a few on a crankbait and keep on going. It’s important to understand, however, that prespawn bass are known to congregate in sizeable schools. When you get a bite, don’t be in such a hurry to leave.

“The football jig is a very versatile tool this time of year,” Lee said. “You can reel a big 3/4-ounce model to cover water or you can use it to pick off less active fish after catching a few on a crankbait. It’s all about having confidence in an area. If I catch a few fish cranking a specific bank, I’ll put the crankbait down, turn my boat around and fish the same bank with a football jig. More times than not, I’ll be able to pick up some extra key bites.”

Recognize bites and don’t hold anything back

Because the large majority of football jig fishing is done in areas with a rocky, jagged bottom, it can be difficult to distinguish between a bite and a sudden deflection. While there’s no substitute for practice or time on the water, Lee has a pretty solid system in place.”The way a bite feels will definitely depend upon the species you’re targeting,” Lee said. “Both spotted bass and smallmouth will thump the heck out of it””there won’t be any doubt. Largemouth, however, seem to eat it differently. You may feel a small ‘tick’, but most often it will become very spongy and your road will slowly load.”

Lee’s tools of the trade

When you feel a bite, it’s important to execute a very hard hookset. Lee sets the hook just as he wood a normal flipping or pitching jig.

“You need to swing as hard as you can,” Lee said. “In most cases, there’s a lot of line between you and the fish, which results in lost energy on the hookset. In order to bury that hook and reduce your chances of losing a key fish, give it everything you have.”

If the water temperatures are in the 40 to 55-degree range in your area, you need to try a football jig your next time on the water. Not only will they often out-fish reaction baits, but they’re known for catching really big bass.