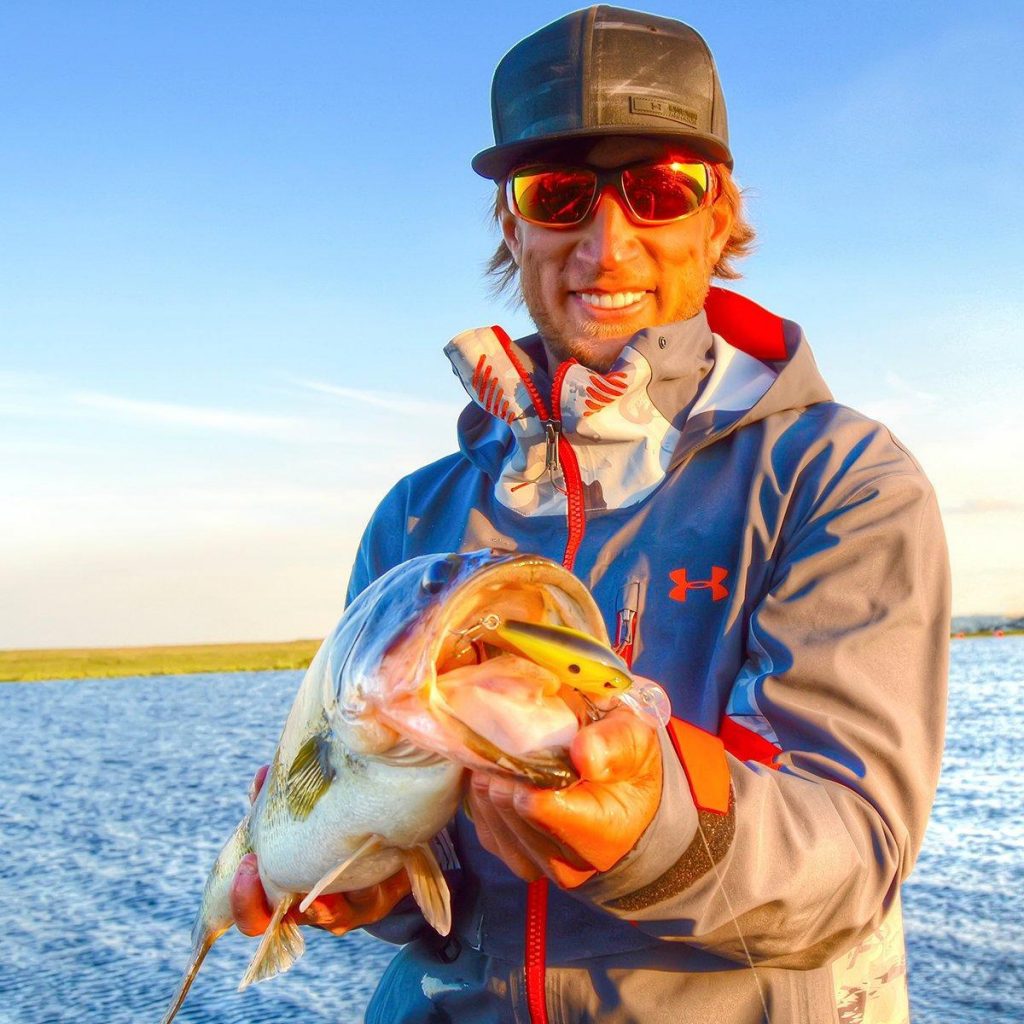 The first warm days of spring usually signals the “the bass rut” is nearly upon us. It seems, however, for every warming trend we see this time of year, it is followed with a massive cold front. And as most anglers will attest, fishing for bass in cold fronts is not much fun, especially for Florida-strain largemouth bass.

It’s two steps forward and one step back. This can be confusing to both the bass and the fisherman, as these cold fronts often throw both of our plans to the wayside. On a recent trip to Florida, two B.A.S.S. Elite Series pros dissected how they attack spawning bass around major cold fronts. 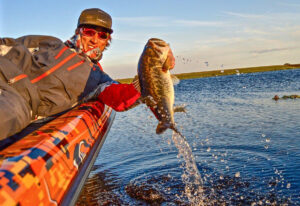 After scanning the water and seeing a myriad of empty beds up shallow, Fletcher Shryock immediately started looking for “the first drop”.  Using his electronics, Shryock located a shell bed on the edge of the spawning flat the bass had been using earlier in the week.

The flat dropped from 6 to 11 feet in this location, and had a pile of bass on it. The best news was that the bass here were biting, even during cold front conditions.

“If you get hit with a cold front when the bass are spawning, they are either going to hunker down in cover or they’ll swim out to the first drop,” Shryock said. “Anytime a weather front passes through, fish like to relate to vertical structure, so they can easily vary their depth in the water column. The water temperatures there will be more stable than the water on the flats, so the bass aren’t as affected by the incoming cold.”

When we talk about the first drop, it could mean the edge of a spawning flat, a defined channel, a hard grass line, the last channel swing before a flat or any other type of sharp, vertical depth change. These are all places where bass stop and congregate before, and after the spawn.

“A lot of anglers overlook the fact that you might not be catching the same fish,” Shryock said. “Everyone talks about ‘following the school’ when in reality you probably only have a 25 percent chance of finding the same group of fish. You have a greater chance of finding a different school of fresh, prespawn bass. And the fish out on the first drop won’t be as affected by the cold front.”

It’s not always as easy as stopping on the first depth change and finding a school of fish. In fact, Shryock was quick to point out it rarely ever happens that way. Usually you’ll have to check multiple different spots or areas until you find a school. 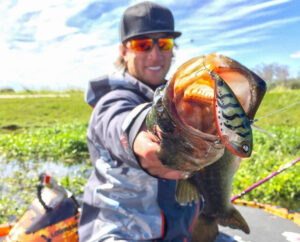 Shryock used a variety of different lures to test the mood of the fish holding to the shell bar, but he did the majority of his damage with the new Yamamota Chikara 300 medium diving Crankbait and Midasu Lipless Crankbait.

“Medium running and lipless crankbaits are my go-to baits if I am fishing during a cold front in the spring,” Shryock said. “When the bass pull off the flats and stack up on a drop like this, I want to try and get them to eat a moving bait first. The more drastic the cold front, the smaller I want my lure to be and the more subtle I want it’s action. If the fish get really finicky, it seems a tight-wiggling bait really shines.”

Not only will Fletcher change baits to find a desired action in a cold front situation; he will also alter how aggressively he works the bait. Oftentimes during a cold front, less is more.

“Instead of aggressively ripping or yo-yoing the bait along, I let the bait sink to the bottom and slowly “wormed” it back,” Shryock said. “Keeping my rod at about 10 o’ clock and raising my rod tip to 12 o’ clock causes the lure to rise just off the bottom, and flutter back down. It’s a finesse way to power fish.” 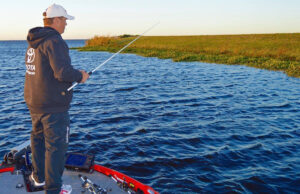 On top of focusing on the first drop, Terry Scroggins pointed out another way to target spawning bass struck with a cold front. He finds the thickest, gnarliest cover available.  In Florida lakes, and other grass fisheries around the country, that means matted vegetation.

“Anytime these Florida bass are hit with a cold front, they will hole up in thick grass mats,” Scroggins said. “A mat creates a canopy, and will actually hold more heat than the surrounding water. It might only be a degree or two, but that can be all the difference.”

Scroggins not only explained this phenomenon, he proved it. Pulling out his punching set-up, Scroggins began focusing on matted vegetation adjacent to the spawning flats littered with empty beds where bass had been bedding earlier in the week. He didn’t make it too far before catching a true Florida giant.

“You see when a cold front hits, those big females will swim right over and seek refuge in a mat,” Scroggins said. “If they can save the energy it takes them to swim all the way out to the channel, they will. A Hyacinth mat like this provides a bass with everything she needs until the weather gets right for her to head back to the beds.”

You won’t likely find a school of fish under mats in this scenario, rather you’ll be fishing for a few bites, but there is a good chance they’ll be big ones.

Because of the size of fish, and the cover he is targeting, Scroggins needs heavy-duty equipment to get the job done.

“I don’t play around when I am flipping mats,” Scroggins grinned. “From my rod to my hook everything has to be big and beefy. I use a 7-foot, 11-inch XH Duckett White Ice rod, 65-pound HI-SEAS braid, a 7:1:1 Lew’s Super Duty reel, a 1 to 2-ounce Reins Tungsten sinker, and a 4/0 Gamakatsu Super Heavy Cover Flippin’ Hook.

“The bait I flip changes depending on the situation. A YUM Bad Mamma beaver type bait is a great choice. However, if the bass get really finicky, I will use a bait with a smaller profile. The colder it is, the smaller I’ll go and the slower I’ll go, yo-yoing the bait up to 15 times underneath the mat.” 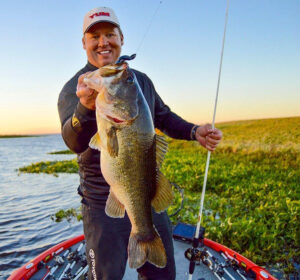 Of course, not every lake has matted vegetation, or even grass for that matter.  While this exact scenario may be restricted to fisheries with aquatic vegetation, Scroggins believes this could be applied to any body of water.

“If the lake you are on doesn’t have grass, then you’ll just want to target what cover it does have,” Scroggins said. “During a cold front in the spring of the year, the important thing is to find the thickest cover available that’s close to a spawning flat. A bass will seek shelter under a dock, in a laydown, or next to a rock-pile the same way these grass bass use mats.”

A small jig or Texas-rig would takes the place of 1-ounce flipping baits.

When spring weather gets indecisive and the bass act funky, take Shryock’s and Scroggins’ advice into consideration. Look either for thick, isolated cover in close proximity to the spawning flat or for the first vertical drop in the area. The bite might be tougher during the cold front, but the bass will still relate to these areas and you can still have a great day of early spring fishing in not so great conditions. 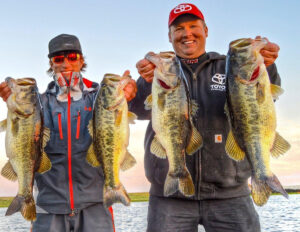