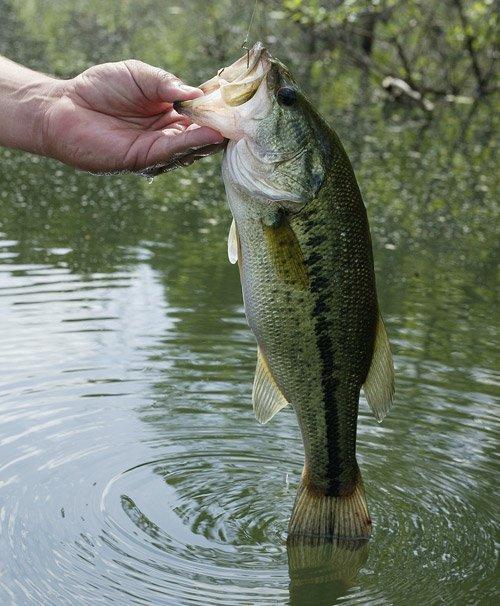 Across the Midwest, South Central, and Upper South it has been raining buckets in recent weeks. Rising water means another change in the position of the fish prime for the spawn. Movement will occur again. Anglers love it when fish get in the bushes and on the bank but a rapid increase in water volume can throw a wrench into their movements but it can also be feast time too. Newly inudated banks are fresh with food and bait fish and a warming day can be killer. Old bank lines, blow down trees, and points are launching pads for the early spring ascent of big female bass heading to the banks. Electronics are critical this time of year and staging fish can be caught in bunches.

The general rule for rising water is “go shallow”. The opposite is true with falling water. Anglers must move inside when the water begins to rise and to the outside of shallow water haunts and look for the first break or deeper water when water begins to drop. Bass know both of these conditions, feel the water movement, and react differently to each. These “trigger points” or strategic fish positioning locations caused by either should be recognized by the savvy bass angler and if properly diagnosed will lead to large bags of fish in both rising and falling conditions.

Gainesville, Florida BASS angler and television personality Shaw Grigsby is a master at finding shallow water bass in rising conditions. “Bass relate to points and weedlines in a rising water conditions just like they do in normal water levels and will move deep within those weedlines to find forage as the water continues to rise. I remember the Bass Superstars tournament I nearly won several years ago was fished in exactly these conditions. I had found a grassy point in a backwater area on the Illinois River that had fish stacked up, said Grigsby. “Fish were using a newly inundated grassy point as an attack point for approaching baitfish. The fish from the entire bay moved to this single location because the conditions were perfect for them in that location. They had food; cover and the outside edge had current. Each of these aforementioned variables combined together make for the right conditions for bass to congregate.”

Finding this type of area is the pot of gold at the end of the rainbow. Fish that are caught from these areas will replenish with other fish and the area will continue to be good as long as the water levels remain constant and do not get muddy. If water levels rise continue to follow the fish in to the areas that have emerged edges. Once the area is fully inundated remember the edges found earlier, the old bank line, and look for the sweet spots there. They may be holding bass and certain areas may hold schools of bass.

Noted Texas Elite Series  professional and fish finding expert Gary Klein loves rising water as well. He has used his knowledge of rising conditions several times but most notably in a tournament on the Mississippi River where the area had been hit with a rainfall of several inches. He had found a large area of blowdowns a long run up river during practice but the area muddied quickly causing him to alter his game plan on day 1.

I was able to squeak out a small limit on my secondary locations but knew if the water would clear up river I could win the tournament. The second day of the tournament I went back up river knowing that the large rain may have flushed the muddy water through and the water would be clearing said Klein. ” Because of the conditions of day 1 no other angler ventured back up the river and Klein was able to catch a large limit flipping and won the tournament. “Knowing how rising water works, the time I spend on the water, and knowing both lake and river systems were all keys to my winning this tournament” he noted.

Falling water conditions can be more difficult, but if read properly can be parlayed into winning stringers as well. Tommy Biffle of Wagoner, Oklahoma has found that knowing how fish relate to falling conditions can be a significant factor in winning tournaments.

Fish will “funnel” out of high water haunts to areas where conditions are more favorable. These travel routes are the keys to finding and catching these fish.” Biffle’s win on the Mississippi River at the Illinois BASS Top 100 in 1995 was won exactly that way noted Biffle. Biffle was able to find a point in the timber with a large beaver pile on its tip that concentrated the bass during a period of falling water. “The bass concentrated on the beaver pile in about 2-3′ of water where the water around it was 6-9′ deep. This little point stacked the bass and allowed me to win the tournament” said Biffle.

Rising and falling water are conditions that anglers will encounter. Knowing how to deal with it can turn a tough day into a great one. The ability to focus what the water is doing, knowing how to react to either the rise or the fall and knowing what presentation and baits are most effective are all parts of the equation to finding bass. The most difficult thing in fishing is finding the fish…catching them is the easy part.