Stick worms for bass are widely regarded as one of the most simple, yet effective ways to catch more fish. In a time where many soft plastic baits look more like spaceships than bass cuisine, sometimes keeping your bait selection simple can pay big dividends.

Throughout the spring, it’s not uncommon to see Yum pro Matt Reed and Keystone Light pro Brent Ehrler ditch the appendages and opt for the simple, subtle profile of a stick worm. It’s almost impossible to fish a stick worm incorrectly, but Reed and Ehrler have keyed in on a few simple, yet very useful tips.

Throw it early and often

When the water temperature is in the 55-degree range, Reed instinctively reaches for his favorite stick worm, the Yum F2 Dinger. Although many anglers utilize stick worms solely on light or weightless Texas rigs, he takes a different approach in the early spring

“Carolina rigging an F2 Dinger on deep points is one of the best ways to catch those sluggish, prespawn bass,” Reed said. “When the water temperature is cold, you always want a very subtle bait without a lot of action. I’ve had some awesome days doing this.”

Ehrler prefers to disregard the water temperature and throw his go-to stick worm, a Gary Yamamoto 5-inch Senko, based only on environmental cues. He’s noticed one important clue that serves as a dead-giveaway for a hot stick worm bite.

“It doesn’t matter what the water temperature is because every lake is different,” Ehrler said. “However, whenever I see fish cruising the shallows, they will, without question, eat a Senko. If the water is wet and bass live in it, you’ll catch them on a Senko.”

A versatile tool for spawning bass

As prespawn bass make their way into spawning coves, Reed uses a small Texas rig to catch roaming bass. He jokingly blames his lack of patience as the primary need for a bullet weight.

“I just don’t like to fish very slow, so I tend to use a 1/16 or 1/8-ounce bullet weight when I’m bed fishing or just covering flats looking for spawners,” Reed said. “You’d think it would hurt your number of bites, but I catch plenty of good fish on it and I can also fish it quicker.”

Both Ehrler and Reed are big believers in “long lining” for spawning bass—a technique in which they locate a bass bed, return at a later time and make very long casts to it with a weightless stick worm. They have fooled countless big bass using this technique. 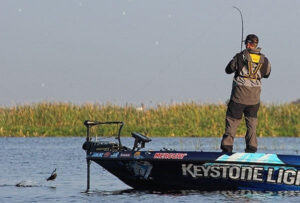 “If you can make that long cast past the bed before the fish sees you, they will almost always bite on the very first cast,” Ehrler said. “You can land your cast a couple feet to the side of the bed and they’ll actually leave the bed and eat it. It’s crazy how they’ll eat that thing.”

It’s a common occurrence to see big, post-spawn bass cruising the shallows. Whether they’re hunting bluegill beds or capitalizing on a recent mayfly hatch, these fish are some of the toughest to catch. To intercept these gypsy bass, Ehrler uses a weightless, Texas-rigged 5-inch Senko as a search bait.

“Again, the biggest key to this technique is making an ultra-long cast,” Ehrler said. “After a long cast, I simply let it free-fall to the bottom, pop it twice and do it all over again. I’m more worried about the initial fall, because that’s how you’ll get 90 percent of your bites.”

Although Reed prefers to target cast a stick worm for post-spawn bass, he echoes Ehrler’s sentiments regarding the importance of the initial fall. He doesn’t leave it in one place too long. 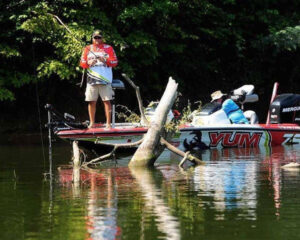 “I get almost all of my bites on the initial fall when I’m flipping an F2 Dinger to cover,” Reed said. “The only time I try to cover water with a stick worm is when I’m fishing long grass lines. Even then, I’ll twitch it a couple times and keep making casts.”

Wacky rig it for a totally different look 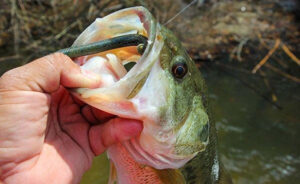 Docks and pontoon boats mean one thing for Ehrler—a wacky rigged stick worm. While he uses a weightless Texas rig to cover water, he puts his wacky rig and spinning gear to work when he’s making quick casts to precise cover.

“You’ll get a lot more action rigging the Senko wacky style,” Ehrler said. “It will fall slower which may require more patience for the angler, but the slow fall will make bass swim from further away to bite it. Any time you need to skip a stick worm into a small area, a wacky rig is the way to go.”

Reed also wacky rigs his F2 Dingers in the post-spawn, but primarily around grass.

“I still don’t work my Dinger too far when it’s wacky rigged, but I’ve found it to be an outstanding choice around grass,” Reed said. “It doesn’t hang up very much and it gives those grass fish a totally different presentation that many people don’t use in those areas.”

Get creative with your presentation

There are endless ways to fish a stick worm, making experimentation essential. For instance, Reed makes good use of nail weights with his F2 Dingers.

“When I really want it to shimmy on the way down, I’ll Texas rig it an insert nail weights sideways,” Reed said. “I’ll actually use 2 or 3 nail weights to match the width of the worm, and I put them in sideways so the Dinger is still pliable.”

Ehrler has had a lot of success fishing a 5-inch Senko on a 1/8-ounce Picasso Shakedown shaky head. While many anglers prefer to Texas rig stick worms, Ehrler finds his approach more erratic on the fall.

“The stick worm will definitely ‘play’ more on a Shakedown,” Ehrler said. “As it falls, the bait and weight are essentially one piece, causing it to spiral. With traditional bullet weights, the bait just follows the weight straight down.”

If Ehrler is wacky rigging a stick worm, he always opts for spinning gear due to the increased castability. He exclusively uses a 7-foot, heavy action Lucky Craft Reaction 2 Spinning Rod and an Abu Garcia Revo Premier 40 spooled with 12-pound Sunline SX1 Braided Line for the mainline with a 6-foot leader of 8-poundSunline FC Sniper Fluorocarbon. For the business end, he opts for a 1/0 Gamakatsu Weedless Drop/Split Shot Hook.

When you hit the water this spring, experiment with these stick worm techniques and develop your own customizations, too. Whether it’s the prespawn, spawn or post-spawn, throwing a stick worm is always a safe bet.