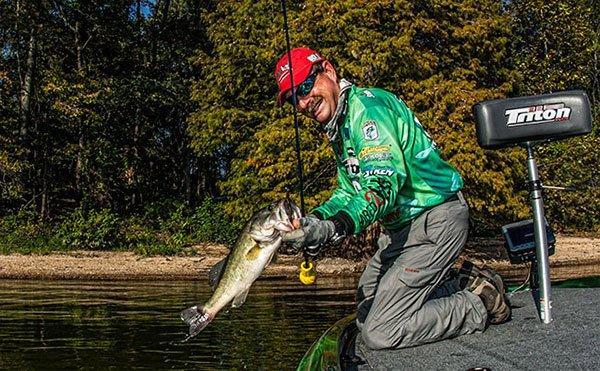 Spawning bass give anglers the opportunity to catch some of the year’s biggest fish. As big females make their way to the shallows to deposit their eggs, their protective instincts make them especially vulnerable to big, bulky soft plastic baits. What happens, however, when you can’t get that monster bass to bite

Pro angler Shaw Grigsby doesn’t let stubborn bedding bass get the best of him. Instead, he simply downsizes his tackle to coax them into biting.

When to go finesse

Catching spawning bass on stout tackle and 60-pound braided line is certainly fun, but Grigsby allows each individual fish to tell him whether or not to downsize his offering.

“Fish are very individualistic creatures,” Grigsby said. “Some are very protective and will eat anything while others are more passive. When you encounter those very timid, skittish fish on bed, you’ll probably have to catch them with finesse gear.”

To determine whether or not a spawning bass is skittish, Grigsby pays close attention to their movements and demeanor. Although it’s not always as simple as it sounds, he has developed a general rule-of-thumb to determine his approach.

“You can never really tell ahead of time whether or not you’re going to have to finesse them,” Grigsby said. “But if that fish just stays in once place watching your bait, you can probably catch them with heavier equipment. When the big female blisters out of there when I make my first cast, I back off a bit and break out my finesse gear.”

The most important thing to decipher when determining how to approach a spawning bass is the cycle of the spawn. Grigsby has noticed a direct correlation between bass behavior and the period in which they lay their eggs.

“Late spawners are notorious for being more finicky than early spawners,” Grigsby said. “If you’re targeting these spawning bass within 3 or 4 days of them laying eggs, they’re generally very aggressive and fairly easy to catch. The later it gets, however, the less protective the females are. When they’re not as protective, finesse fishing is the way to go.”

Grigsby’s favorite finesse bed fishing rig is a Strike King KVD Perfect Plastic Caffeine Shad. Although many anglers don’t pay much attention to swimbaits for bed fishing, this bait has made him a big believer.

“The Caffeine Shad is one of my primary bed fishing baitsâ€”it even caught a 10-pounder for me during the Harris Chain event that I won,” Grigsby said. “I threw everything I had at her and she wouldn’t react to it, but she inhaled the Caffeine Shad.”

Since it’s a swimbait, it would make sense to swim it through the bed, right? He’s caught plenty of bedding bass swimming the Caffeine Shad, but has noticed the biggest bass are more apt to attack a bait that poses more of a threat.

“When you put a light bullet weight on the Caffeine Shad, it looks just like a bream sitting nose-down in a bass bed feeding on eggs, which drives a big female absolutely nuts,” Grigsby said. “A big bedding bass doesn’t take kindly to bream, especially when they’re feeding on its eggs, which makes this bait a phenomenal choice.”

When spawning bass are especially stubborn, Grigsby won’t hesitate to throw a drop shot in a bed. It’s lively presentation seems to coax bass into biting when bulkier baits fail.

“The drop shot is a big player in my bed fishing arsenal,” Grigsby said. “The way it’s rigged gives the bait a really live action because it just suspends over the bed and slowly flutters down with slack line.”

In ultra-clear fisheries, Grigsby throws his drop shot rig on 6 or 8-pound Seaguar InvizX fluorocarbon. Although it may seem a bit lite for targeting big fish, it’s all about how you fight the fish once it’s taken the bait.

“You absolutely cannot horse a drop shot fishâ€”especially one that’s bedding in shallow water,” Grigsby said. “It’s important to remember in this situation that the bass has youâ€”you don’t have the bass. Set the drag fairly loose and just let her do what she wants to do.”

Grigsby has also had a lot of bed fishing success on light Texas rigs and shaky heads. Downsizing to 8 or 10-pound test and using a smaller weight, such as a 1/8-ounce or 1/16-ounce, is often all that’s needed to convince otherwise suspicious bass to bite.

When selecting a soft plastic bait to use on this rig, Grigsby wants something small and soft for a very specific reason.

“I love using a Strike King KVD Perfect Plastic Finesse Worm in these situations,” Grigsby said. “Sure, it’s small and dainty, but that doesn’t mean it won’t catch a huge bass. I like using a small finesse worm because when they pick it up to move it off of the bed, they’re more likely to grab the hook.”

For the business end of the rig, he primarily uses a 3/0 or 4/0 Lazer Trokar TK 110 hook. It’s important to have a thin, light wire hook that penetrates both the bait and the fish easily to avoid break-offs with the light line.

“You don’t want to wail away with a giant hookset on such a small, finesse rig,” Grigsby said. “That’s why a really sharp hook is an absolute necessity in this situation.”

Traditional split shot rigs are fairly self-explanatory with a simple split shot weight clamped about a foot above the hook. This old school bed fishing method has its benefits, but Grigsby modifies it with a more new school approach.

“Those split shot weights just don’t come through cover well enough for me,” Grigsby said. “As a result, I like to take a light bullet weight and peg it about 10 or 12 inches above the hook. It’s kind of like a miniature Carolina rig, except without the swivels.”

The split shot rig has some of the same appeal that the drop shot does. As the weight rests on the bottom, the bait hovers above the bed, emulating an impending threat to the bass’ bed. When a bass strikes the rig, it’s important to set the hook after retrieving your slack line and feeling the weightâ€”just like a Carolina rig.

As you’re on the lookout for spawning bass this spring, make sure to bring your finesse gear with you. It goes against the mindset of many anglers, but finesse bed fishing is hugely helpful in getting those stubborn bass to bite.