A couple years ago, my dad and I were fishing a little local pot tournament on March 2nd here in central Alabama. The nights were still pretty cold, but winter was trying to wrap up and give way to spring. It was a nice sunny day that day and naturally we were bouncing ideas off one another as tournament partners will do.

We both kind of thought ‘buzzbait’ around the same time, though neither of us would have probably picked it up if we hadn’t had the ‘I second that motion’ type of immediate response from the other. Dad was lobbing a spinnerbait around which we both felt good about too so I put down whatever it was I had in my hand and picked up the topwater.

Maybe three casts later I caught one of the biggest fish of our stringer that day, a 5-pounder to compliment the 17 pounds we finished the day with. Though both of us were feeling the buzzbait, we were still both a little surprised to see a fish jump all over it in the 50-degree water.

Flash forward a couple years and while watching MLF coverage of the Bass Pro Tour event on Eufaula, I saw Alton Jones Jr. pick up a buzzbait and commit to it in search of a mega bag back in early February. This was the first time I really asked myself, how cold is too cold to throw a buzzbait and what makes for a good day to throw it in cold water? So I posed these same questions and others to Jones.

“It’s something that I always keep on the deck to keep them honest in the early spring,” said Jones. “It’s really hard to tell when it’s going to work but when it does work, it’s the deal.”

“Typically you’re only going to get a few good bites throwing a buzzbait in cold water. But with that being said, some of the best buzzbait days I’ve ever had were when the water temps were like 54. I think back to Ross Barnett in an Open where I caught around 25 fish on a buzzbait in water temps between 52 and 54.”

For Jones, there are three key factors that go into when he’ll choose to throw a buzzbait in cold water and which buzzbait to throw.

“Number one is water temperature trend. If the water is on a warming trend, I’ll start throwing it at 50 degrees.”

However, if the days are consecutively getting colder, Jones admits he won’t even throw a buzzbait in 57-degree water. The key is for the fish to be warming and growing more active by the day and even by the hour rather than becoming less active as the water around them cools down.

“Number two is where the fish are located. If you’re at a place where they like to get their backs out of the water and the water is extremely muddy, a place like Eufaula where the water is dirty and 2 feet is kind of deep, that’s a great place to throw a buzzbait in colder water.”

The main reason Jones doesn’t throw a buzzbait in water deeper than two feet is that there are other presentations that work better for him then.

“A buzzbait for me is essentially a vibrating jig or a spinnerbait that I can throw in a foot of water. That’s how I treat it in cold water.”

The third factor for Jones plays off the old cliché but ever-so-important principle of matching the hatch.

“Number three is the baitfish size. You have to pick your buzzbait based on the size of the bait they’re feeding on. But we’ll get more into that in a minute. If I’m looking to cover a lot of water and I have vast areas of water less than 2 feet, that’s where I’m going to throw it. That’s cold water buzzbaiting for me, about 2 feet deep is my max.”

Jones’s reason for this is the lethargic nature of a bass in cold water. A bass is cold-blooded and the amount of energy it’s willing to put out solely depends on its environment. Though a bass will break the surface for a buzzbait in cold water, it still won’t travel long distances to do so or come up out of 10 feet of water to crush it. 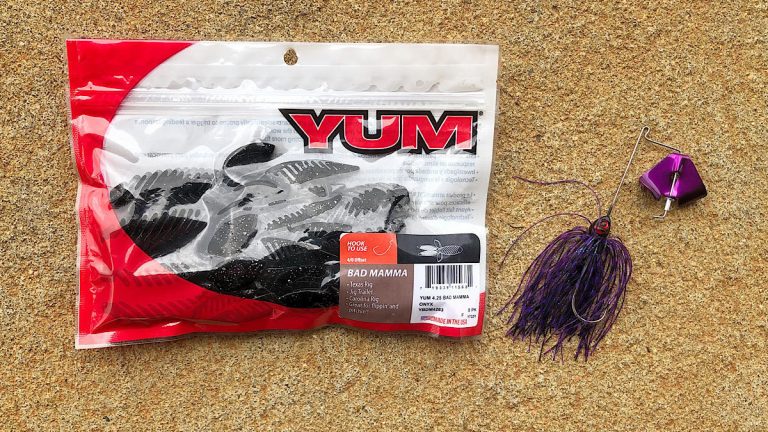 “Typically I like a little more subtle presentation in cold water. Kind of the same idea as a flat sided crankbait with a tight wobble. I’m looking for a lighter buzzbait with a smaller blade, either a 1/4-ounce or even in some situations an 1/8-ounce buzzbait. Something real subtle.”

Keeping with that concept, Jones prefers a more subtle trailer on his buzzbait in most cold water scenarios. Where he’d throw a YUM Tip Toad as a trailer in warmer water situations, he’ll typically go with a more subtle creature bait in cold water, the YUM Bad Mamma in particular in his case.

“A lot of times these fish in cold water aren’t just blasting it. You’re getting bites where if you weren’t looking you wouldn’t even know they hit it. And if it’s just a hook, then there’s not much body for them to suck under.”

Adding a beefy trailer to the bait also increases its cast-ability, a very important thing to consider when throwing a 1/4-ounce and even an 1/8-ounce buzzbait like Jones does. These baits are hard to throw, especially in windy conditions. So the added weight really helps get the bait out there.

The other added value of a wide, fairly flat creature bait like the Bad Mamma is that it will actually provide lift and help keep the bait on top of the water even when the bait is fished slow, a key element to Jones’s presentation.

“Especially when it comes to cold water buzzbaiting, but really all buzzbaiting for me the retrieve is as slow as I can keep that blade on the surface.”

Back to the size of the baitfish 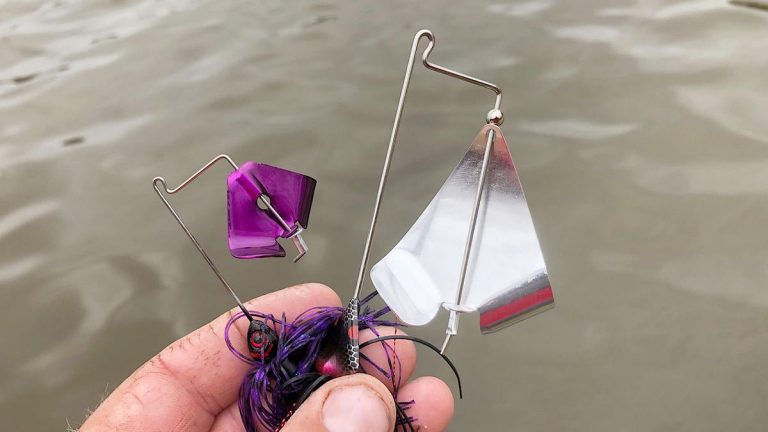 Typically Jones goes with a small buzzbait and a finesse-style presentation in cold water situations because the fish are feeding on small baitfish that time of year.

“When I’m around a lot of really, really big fish or on places with big gizzard shad like the Tennessee River or Fork, I’ll actually throw the Booyah Squelcher. It’s a lot louder and has a lot more presence than your typical buzzbait. It has a giant blade on it and I will throw that in certain big fish scenarios.”

Jones admits that he will throw this bait in cold water that is slightly deeper than his typical 2-foot max rule and he opts for it in situations where it’s a little too windy for the smaller buzzbaits.

“My experience with that bait though, especially in cold water, that’s where you’re getting into that hunting 2 or 3 bites type thing. Where you already have a good bag and you’re looking for that kicker. It’s not my goto tournament bait, but whenever you do get a bite on that one it’s usually a whole other class.”

Jones’ setup is the same throughout his whole lineup of buzzbaits with the exception of line size.

“I throw 30-pound test Seaguar Smackdown braid on the 1/8-ounce buzzbaits just so that I can cast it a little bit further. And then I throw 50- or 65-pound test on the rest of them depending on the cover I’m around.”

“I’m not sponsored by them but you’re more than welcome put it in there, I throw them on a Abu Garcia Revo STX. I think it’s a good reel for the money and I buy a lot of them myself. Even though I’m reeling the bait slow, I like a pretty fast reel just because a lot of times when those fish do hit it in really shallow water, they’re going to cut really fast in one direction or the other.”

If the sun is shining and you’re feeling all warm and fuzzy yourself in the early spring, chances are the fish are too and it’s time to dust off the topwater box and try to bring one to the surface. Look at the trending weather pattern and if the temps are on the rise, make the call.

But for that warm weather and sunshine to affect the water enough to draw a topwater bite, it’s going to need to be fairly shallow. Throwing a buzzbait on a flat in 2 feet or less allows you to cover the water well while keeping a bait out of the dirt and cover but well within striking distance.

And be sure to pick a bait that works well with the particular environment you’re plugging it into. If you’re only around small baitfish, don’t go big. But if the situation sets up for it, don’t be afraid to do so. Crawl that buzzbait along the surface and prepare for impact. The spring is finally almost here. Ring it in right with a nice topwater bite to set the tone.