It’s no big secret that knowing how to fish laydowns can make you more effective at catching big bass. Most of us tend to overlook the small, seemingly menial caveats, however, that can dramatically increase both the quantity and quality of our catch.

Elite Series pro Jamie Horton is no stranger to targeting laydowns for trophy-sized bass; in fact, he’s one of the best when it comes to this technique. After winning numerous tournaments by carefully dissecting fallen trees, he has learned some useful tips that you can apply to your favorite body of water.

Lonely is a good thing

Would you rather fish a stretch of bank laden with great-looking laydowns or an area with just a single, solitary laydown? If you’d make a hard line to the isolated one, you’re ahead of the game according to Horton. These isolated pieces of cover are very likely to hold quality fish.

“Fallen trees are some of the best big fish habitats. The bass can move up the tree and feed in two feet of water or slide out and suspend in the deeper limb,”they have everything they could ever want.”

“Don’t get me wrong, you can catch ’em on banks with a bunch of laydowns, but if you can find one by itself, your chances increase dramatically,” Horton said. “If an area is void of cover, the bass will congregate on a single fallen tree. They don’t have many options for ambush points or shade, making them outstanding targets throughout the entire year.”

If a laydown is located in 6 feet of water or less, Horton considers it shallow. In this situation, he relies on two primary baits””a squarebill crankbait and a Dirty Tackle Jig tipped with a Netbait Kickin’ B Chunk. The crankbait picks off the more accessible and aggressive bass while the jig gets up-close and personal.

Always be sure to differentiate your squarebill retrieves when targeting laydowns. Instead of a constant retrieve, try momentary pauses and erratic twitches to increase your odds. Colliding with branches is also an excellent way to draw reaction strikes!

“The water surrounding shallow laydowns tends to have a little more stain to it,” Horton said. “This decrease in visibility allows me to get away with throwing a crankbait to catch a few bonus fish. I’ll cast it across the front of the laydown and down the sides while banging it into cover in an attempt to create reaction strikes.”

Although it may seem a bit cumbersome to use a crankbait around such gnarly cover, this approach allows Horton to cover water efficiently, which is indispensable when developing a solid laydown pattern.

“If they’re really chewing that squarebill around laydowns, I can cover a single tree very quickly without wasting much time,” Horton said. “I’m also able to catch those aggressive fish on the outskirts of the laydown without disturbing the ones that may be positioned tighter to it. Instead of going straight to the middle of the tree and causing a big racket if I catch one, I can ‘quietly’ pick off a few before I even get to the meat of it.”

After covering the perimeter of shallow laydowns with a crankbait, Horton does his cleanup work with a jig. There are two parts of these trees he never overlooks.

Before moving on to new water, Horton suggests getting a little “rough” with the laydown. After flipping or pitching to the middle of the tree, he purposefully pops the jig into limbs, lets it fall a few feet and crashes into ’em again. 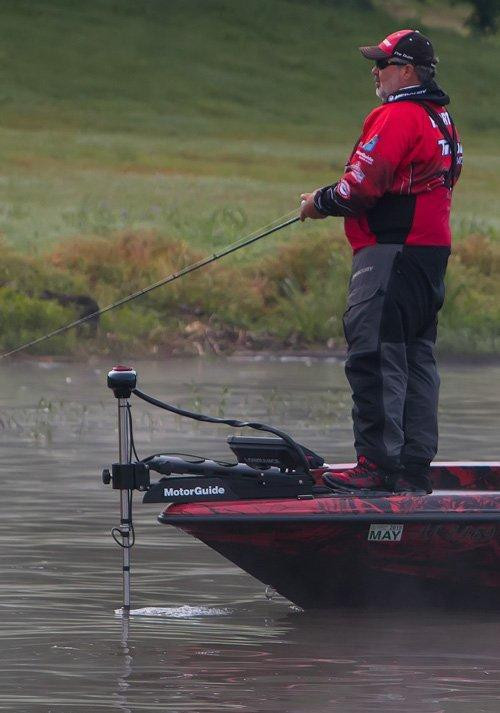 In many fisheries throughout the country, shallow backwater creeks are adorned with plentiful laydowns. Although the large majority of anglers are going to fish their way into these skinny areas, Horton employs a much different technique.

“When a lot of folks work their way back into these creeks, they give up far too soon,” Horton said. “If they don’t get bit after fishing a handful of laydowns, they assume the fish aren’t there. If you go into the creek and haven’t seen any signs of current from the feeder creek yet, you’re shorting yourself.”

There are two secrets to fishing small water laydowns that Horton has used to win several tournaments, including a Weekend Series Championship. They may sound crazy, but it’s hard to argue the results.

In the heat of the summer, one of the most effective ways to target quality bass is by dissecting deep laydowns””or fallen trees that protrude into a fishery’s river channel over 20 or more feet of water. Because the bass most often suspend underneath the trees’ limbs, moving baits fished higher in the water column are very productive.

If you feel like your jig is hung in a limb, keep a tight line and hold it in place because a bass may have it. Big bites will often feel like a small “tick” or a sudden increase in weight.

“Whether it’s the middle of summer or the dead of winter, deep water laydowns play host to big bass,” Horton said. “But it’s not as simple as flipping a jig or a worm to ’em and fishing it along the bottom. Medium-depth crankbaits, jerkbaits and swim jigs are absolute staples for me when fishing this type of cover.”

Horton hones in on three specific types of deep laydowns, using different presentations for each.

If you’re having trouble figuring out a consistent pattern on your local fishery, spend some time locating and experimenting with laydowns. Not only will you be able to cover water at an astounding rate, but you’ll also have a legitimate chance of catching numerous big bass.