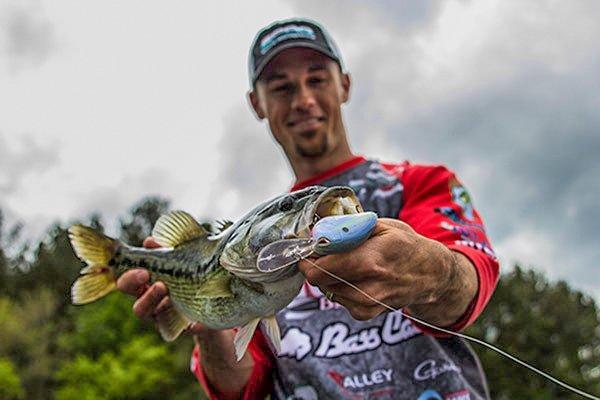 There always seems to be an awkward adjustment period that both anglers and bass undergo in the beginning stages of the post-spawn. Late spring bass are worn out from spawning, searching for new homes in deeper water and anglers aren’t ready to give up on their hot spring fishing spots.

When faced with lethargic, transitioning post-spawn bass, SPRO pro John Crews turns to a crankbait for the majority of his fish catching needs. Not only does it allow him to cover more water than other methods, but it also leads to plenty of big bass.

A different approach to post-spawn bass

We’ve all heard it hundreds of times—look for post-spawn bass on the first drops near spawning flats. Crews, however, isn’t totally sold on this theory. While it may certainly work for some people, the majority of his better fish come from elsewhere.

“I think people get caught up in the ‘first drop’ theory a little too much,” Crews said. “The largest groups of bass don’t always stay in close proximity of the spawning flats. Instead of finding the first break, the bigger bass will often look for the best break.”

It’s not uncommon for Crews to find groups of big females gathered on break lines over 1/4-mile away from their shallow spawning grounds. The most productive breaks tend to share hard bottom composition and a large, flat surface on one side. Dramatic depth changes aren’t always a necessity, either.

“In the early post-spawn, you don’t have to worry too much about finding sharp break lines,” Crews said. “That’s a little more of a summer pattern. This time of year, sometimes the most subtle drops, whether they’re 2 feet or 4 feet, hold the most fish. Bottom composition is probably the biggest deciding factor for a bass.”

There are several different theories as to why post-spawn bass inhabit hard bottom areas, but Crews believes the answer is simpler than we may realize. When bass feed in hard bottom locations, the rigidity of the bottom composition serves as a dinner plate for bass—they can simply pin their prey against it for easier feeding.

Break up the party before you bring in the vacuum cleaners

Soft plastic presentations such as drop shots and Carolina rigs certainly have their place in the post-spawn spectrum, but Crews prefers deep crankbaits for a very specific reason.

“Crankbaits help me cover more water, which is crucial to post-spawn fishing,” Crews said. “I can cover an entire break line in 6 or 8 casts with a SPRO Little John Baby DD, but it may take me 5 or 10 minutes with a soft plastic presentation.” 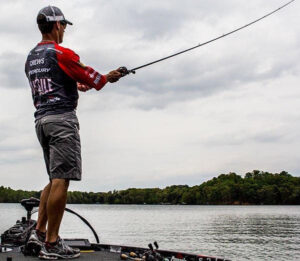 Covering water has proved especially useful for him on river systems. In just 2 hours of fishing with his trolling motor at a steady 2 miles per hour, he is able to cover almost a mile-long stretch of ledge with hisSPRO Little John DD crankbait. Ledges are a strange beast—sometimes you can fish a mile without any bites, then find several quality schools of bass in the next mile. His productivity would be cut in half with a slower presentation.

“When I throw a Little John DD on a school of deep post-spawners, I relate it to breaking up a big party,” Crews said. “I bust it up by catching a bunch of fish on the crankbait, then I clean up the crumbs the party left behind with my vacuum cleaners—a big worm, a shaky head or a drop shot. Sometimes those ‘crumbs’ can be pretty big.”

Rely on your rod and reel more than your graphs

While Crews will look for yellow, tight lines on his Lowrance electronics that signify hard bottom composition, he primarily relies on his instincts when locating post-spawners.

“I find a lot more fish with a rod and reel than I do with a depth finder,” Crews said. “I’ve idled over places that look okay without many fish, then turn around and absolutely wear them out. If I passed it over, I would have never caught them.”

Shutting down your graphs and simply “going fishing” is a great way to learn how to interpret the bottom composition of your favorite fishery, according to Crews. He’ll often fish an area without using his graphs, and then turn his graphs back on to see what the breaks really look like. This helps him learn much faster.

“I’ve had tournaments in the past where I busted my transducer and was left without any readings on my electronics,” Crews said. “I felt a little lost at first, but I ended up getting a much better, more thorough feel for my areas. Your rod and reel is a very powerful tool when searching for post-spawn bass.”

When approaching a prime post-spawn area for the first time, Crews has one thing on his mind in regard to crankbait fishing—bottom contact. Because he gets the majority of his bites when his crankbaits dredge the bottom, it’s always his number-one concern. 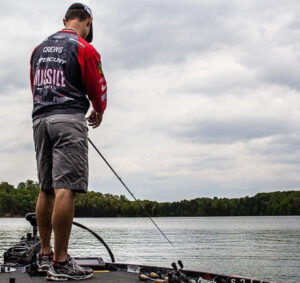 Once he establishes an angle that allows for ample bottom contact, his next order of business is to locate the “trigger angle”. While many anglers may catch a fish and continue fan casting in an area, Crews pays close attention to the details.

“Most deeper, post-spawn areas have that special angle that will help you get more crankbait bites,” Crews said. “There are a lot of factors that many of us, myself included, can overlook at times, such as sunlight angle, baitfish orientation and current direction and speed.”

To find the sweet spot, Crews will circle the underwater structure—whether it’s a break line, ledge or even a hump—until he gets consistent bites at specific angles. He tends to have the most success when casting his crankbait cross-current. As the bass are facing into the current, cross-current presentations allow the bait to cross through their entire field of vision, giving them ample time to react to it.

When he starts catching fish, especially on a Little John DD, Crews makes certain to drop an old fashioned marker buoy to give him a good frame of reference.

“When you find a good school of bass, make sure you drop a marker buoy,” Crews said. “GPS coordinates are good, but buoys don’t move which helps a lot of anglers get a better visualization of their key casting angles.

An open mind is essential when throwing a crankbait for post-spawn bass. If you can find quality drops, know when to throw a crankbait instead of soft plastics, rely on your fishing instincts and experiment with boat positioning, you’ll be able to catch more post-spawn bass on a crankbait this year.