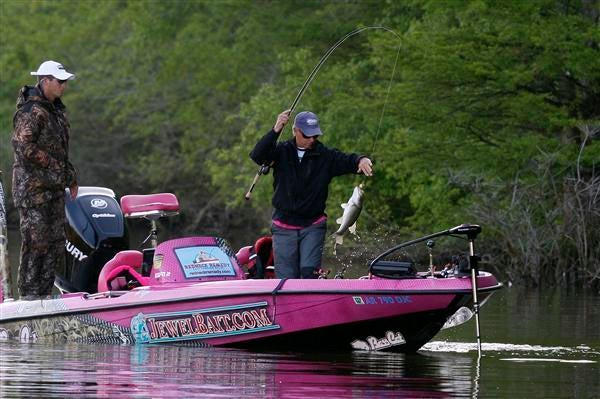 Pro angler Kevin Short has 100,000 more reasons in proof of why anglers need to understand how bass react in spring to fluctuating water levels. The knowledge resulted in his $100,000 payday at the recent BASS Elite Series tournament held on the famed Lake Pickwick that crosses boundaries in Mississippi, Alabama and Tennessee.

On the first practice day of the tournament week, the water level was about one foot above normal and expanded into more cypress trees than usual. Short fished to his strength, using a jig, to probe the flooded timber in search of the kind of quality bass needed to score a major tournament win. The personable angler from Arkansas seems always willing to share what he knows with others interested in learning.

“It’s always difficult this time of year, when a bass’ metabolism is high and the fishing good, to find and really key in on areas that are holding and producing big bass,” Short said. “I mean, you’re often faced with leaving quantity of bites to look for quality. But that’s what I was doing with a Jewel 5/8-ounce J Lock Flip’N Jig, plus a new prototype swim jig from the company. These two baits proved to be the ticket for discovering an area holding exactly the kind of fish I wanted to find, 4- and 5-pounders.”

He had two color combinations working well. One was a Black/Blue Flash skirt because he liked the dark color for the bulky Flip’N Jig in the stained water. The other was an Orange Craw skirt because it had a “bluegill” look to it, and he said he was seeing lots of fry around the stumps. That often attracts the panfish to feed on them, which in turn are prime prey for bass. He flipped, pitched and swam the jigs in and around the cover.

For the three practice days, the water stayed up higher than normal, but Short became concerned by signs it was beginning to recede as practice came to a close. On the tournament’s first day, it didn’t take long for him to realize things had changed.

“I ran to my area first thing and fished a quarter-mile stretch with only one bite and lost that fish,” he said. “I could tell the water was down and things had changed. But since I knew there were a lot of quality fish in the area, I just had to figure out where they went. The most obvious place was a small area in the middle of the creek with a few cypress trees. It turned out to be the right call.”

Short probed the area with his Jewel jigs first, and watched other jig anglers fish through, but he found the only way he could really get the bass to consistently bite was by banging a crankbait off the stumps.

“These trees were in up to 4 feet of water, but the fish weren’t really relating to the bottom around them,” Short said. “What I discovered is that they would react to a WEC E1 crankbait, but only when I banged it into the cypress trunks. Fortunately, they were the same good quality fish I had located with a jig during practice.”

Short said the fish preferred the Chartreuse Classic color of his crankbait on the first two tournament days when it was sunny, but when the weather conditions changed over the last two days, the chartreuse version with a black back worked better.

He said his finding the quality fish during practice with his Jewel jigs was the key to his focusing on the area he ultimately stayed in for the win. “While I heard other anglers talking about catching 40-50 bass per day, I was catching around 10-15 keepers, but they were good ones.”

When it was all said and done, Short came out on top of the 93-angler field, having a five-fish limit on each of the four days for a total of 75 pounds, 1 ounce. His last day catch of five fish weighing 23 pounds, 5 ounces was the heaviest bag of the tournament and provided nearly a five-pound advantage over second place finisher, Cliff Pace.

“Fishing conditions in spring can change on a day-to-day basis,” Short said. “Making a few adjustments can be a big difference between a good day and a great day, especially when water levels fluctuate. As a general rule in spring, bass follow the direction of the water level.”

As for the prototype swim jig that Short referenced he was using with success during practice, Jewel Bait Co. president Gayle Julian says it’s still too early for a sneak peek.

“We do have a new jig product we’re working on that we have Kevin, Mike McClelland, Jeff Kriet, Larry Nixon and a few others experimenting with, but we’re still providing some tweaks before unveling it to the public,” Julian said. “We are excited about it being a part of our 2011 new products though.”

For more information about the Flip’N Jig and other products found in Julian’s company, visit JewelBait.com.