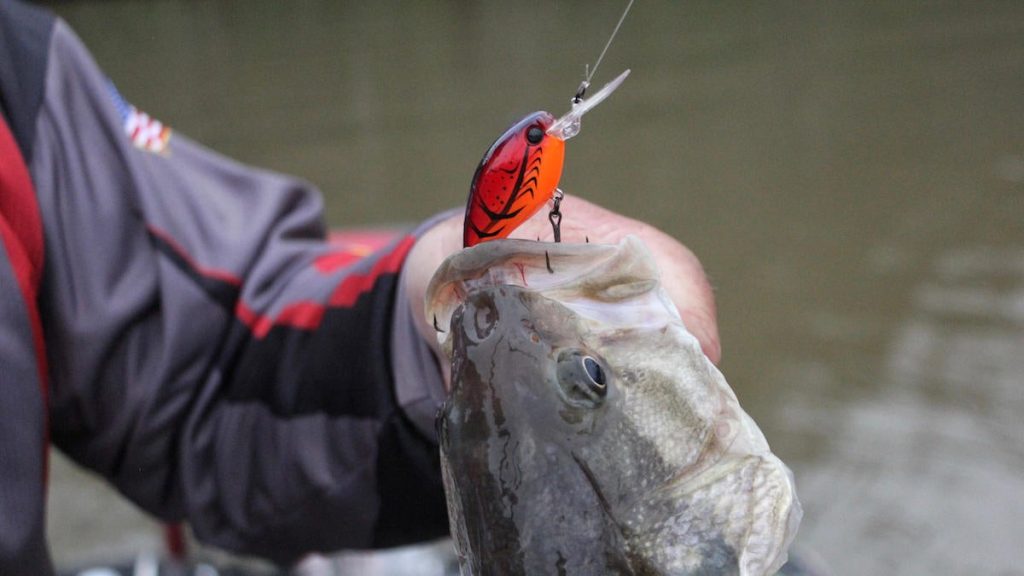 Professional angler and Forrest Wood Cup champion Clent Davis freely admits that he likes to keep his fishing basic. If he ties on a jig, 9 times out of 10, it’s going to be black and blue or green pumpkin… unless he’s swimming it. Then he’ll add in his signature Shad Spawn color when the time is right.

The point is, we as anglers very often overthink things. We worry too much about being able to do it all, to the point we skip over a lot of the basic stuff and never master it. Davis is nearing a million dollars in career winnings and says that he keeps it more basic now than ever before in his career.

So we asked Davis to give us three must-have baits to fish throughout the prespawn and the “when, where and whys” that separate them from other options. 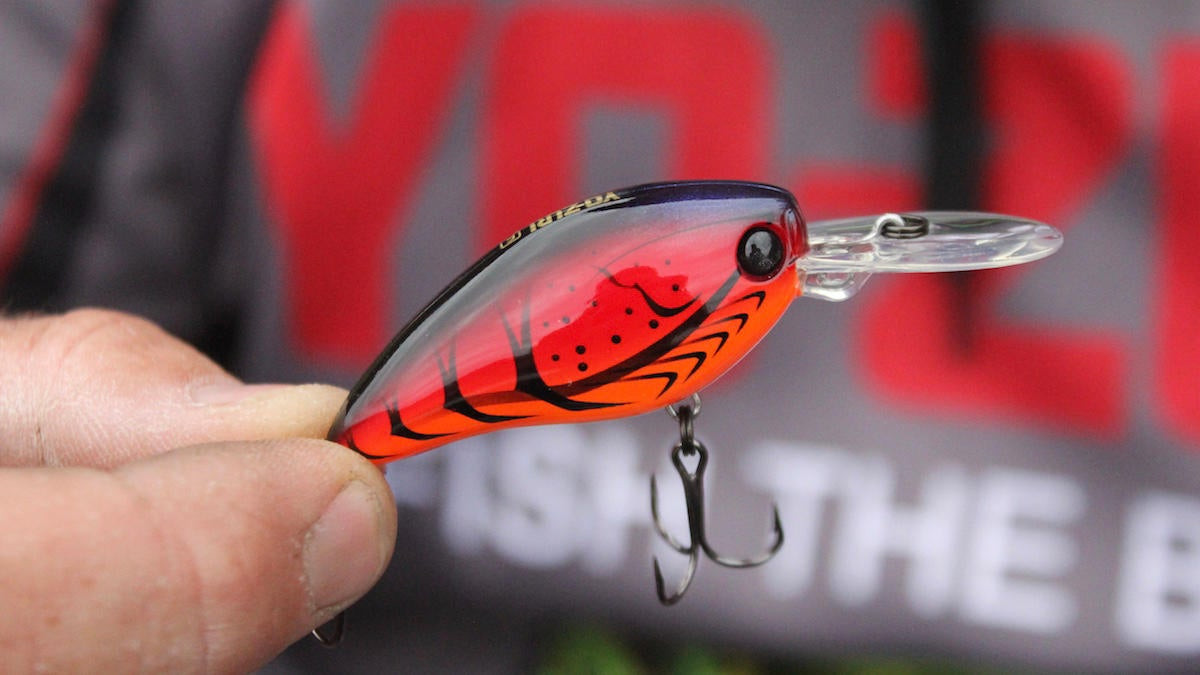 Davis loves a small, medium-diving crankbait in the prespawn and throughout much of the year for that matter. One in particular, the Yo-Zuri 3DS Medium Diver, he calls his “auto bass”. When he needs a fish, he picks up this crankbait.

“During the prespawn, I like to crank primary points and secondary points with it,” said Davis. “Seawalls, wood; pretty much any kind of cover.”

The crankbait deal is all about two things for Davis-fishing it as slow as possible while still making contact with cover.

“The more you can hit stuff with that crankbait, the more bites you’re going to get. And to me it seems like the slower the better unless they’re just really hot with a front coming in.”

This is also a bait that’s ideal for reeling down into deeper submerged vegetation. The kind of deal where you want to just tick the tops of the grass and rip it free when it occasionally grabs on.

And when it comes to color selection, Davis will again limit his options.

“I really like the Red Crawfish color in the pre-spawn. And the Hot Tiger color if you have a little off-color water.” 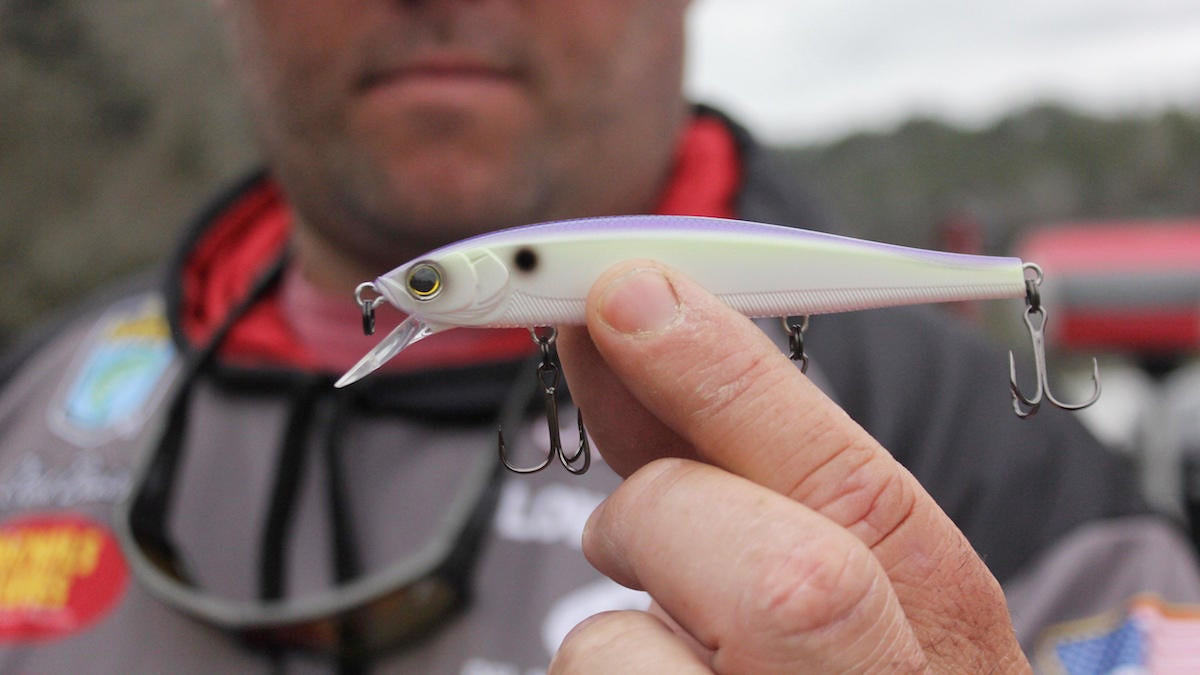 A jerkbait, like a medium-diving red crankbait, is another one of those baits that just screams prespawn. Though Davis admits he doesn’t throw a jerkbait as much as he probably should and leans more heavily on the crankbait when fishing water where both could be deployed, he still knows there’s a time and place for the jerkbait to shine bright. He’s had a lot of success using the Yo-Zuri 3DR Series jerkbait.

“I usually let the water color tell me,” Davis said. “I like a jerkbait when the water is real clear. And when the bass get to floating.”

“Floating” is a term Davis uses to describe when bass suspend up near the surface. When the water temps exceed 57 degrees, that’s when Davis notices that the bass start to suspend a lot within 5 to 10 feet of the surface. These fish relate more to the surface than they do the bottom, so Davis finds them in all depths of water and the jerkbait is the perfect tool to target them.

“The depth in which you can catch them just depends on what lakes you’re on. If you’re out in Arkansas on a highland reservoir or at Smith Lake here in Alabama or something like that, it’s definitely great over a hundred feet of water out off the ends of points and secondary points. Those fish are always floating and that’s when the jerkbait is better.” 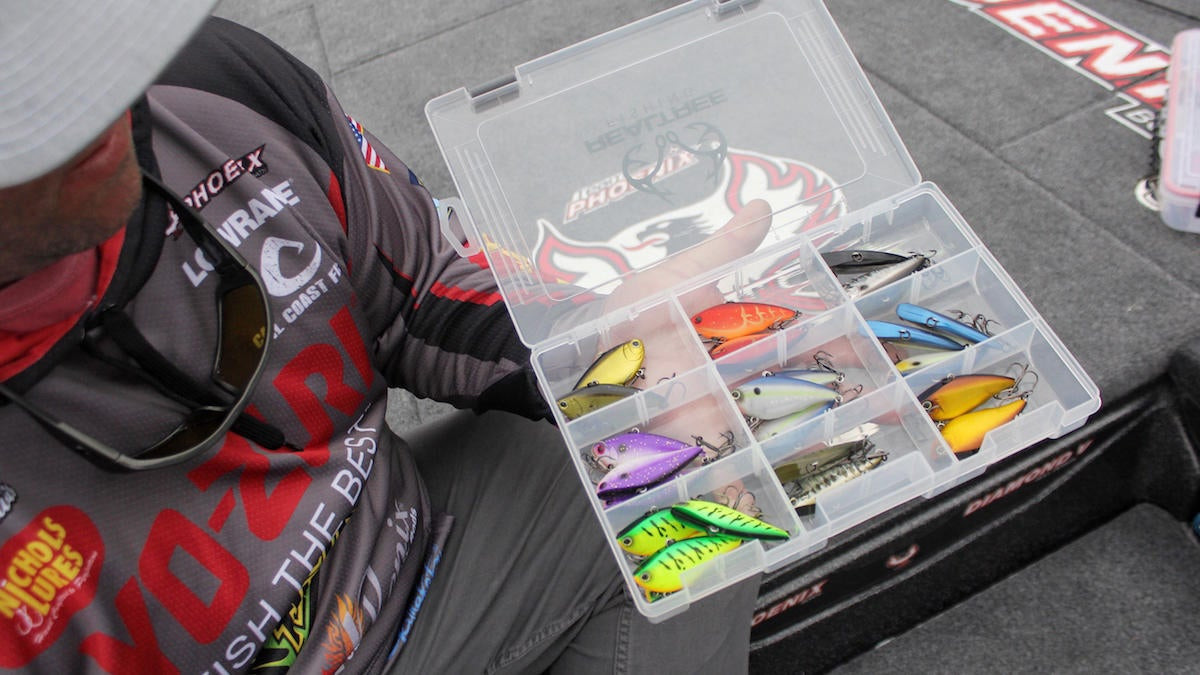 The third of Davis’ three prespawn baits is another that’s hard to leave out for this season of fishing; the lipless crankbait. A Yo-Zuri Rattl’n Vibe in particular is his go-to lipless plug.

“Of course it’s great for ripping out of grass. And it’s great on mudflats. It’s just a great bait for covering water in general.”

As the fish group up and move shallow to prepare for the spawn, there’s often a lot of dead water between fish catches. But when you do find one, you’ll often find a wad of them. Having something on deck that allows you to cover water quickly is critical this time of year. And, a lipless crankbait can be fished at a wide range of depths.

“You can throw it in the dirt. Usually when I’m throwing it really shallow like that I’ll go with a 20-pound test to keep the bait from sinking real fast. And if I’m fishing out in 5 or 6 feet, then I’ll usually drop down to 14-pound Top Knot fluorocarbon.”

There’s an ongoing debate among many anglers as to what line to use when fishing a lipless crankbait around submerged vegetation like coontail and hydrilla. Most agree that braid is better for cutting through the grass and ripping the bait free, but some argue the visibility of the braid is not worth the reward. Others then argue that, to a bass in vegetation, the line likely looks like just another strand of weeds. That point is countered with, ‘that would be a mighty fast-moving piece of grass’. And the debate goes on. For Davis, however, a combination of both seems to be the ticket.

“I’ve been experimenting with both and I’ve gotten down to where I throw a braid to fluorocarbon leader and I really doing like that.”

With a fluorocarbon leader, Davis has the stealth down close to the bait but still has the super low stretch of braid as his mainline which helps rip the bait free from debris. 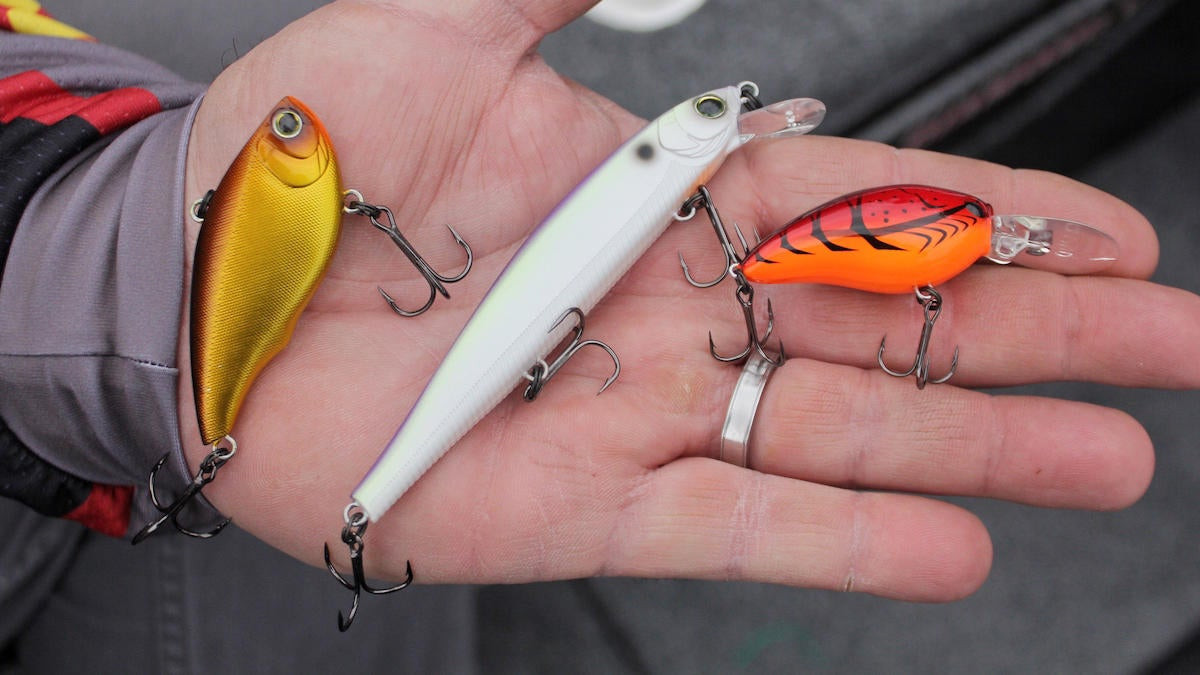 When you start talking prespawn, you hear a lot of anglers come back to the same handful of bait categories again and again. The bass are typically very aggressive in the prespawn as they are feeding up to head to their beds. So they’ll hit most anything. The trick is getting something in front of them.

If a bass is around cover, a medium-diving crankbait is great for digging it out. If the bass are suspended, a jerkbait is perfect to get right down in their faces. And when there’s a lot of water to cover, a lipless crank gives you the ability to do so in a timely fashion. These baits are all great at triggering strikes, but the key is keeping it simple and picking the right tool for the job based on what the bait does.

Trying to beat a nail into the wall with a saw would look pretty foolish. But throwing a jerkbait on a grass flat before you locate the fish doesn’t seem like that bad of an idea. Until you’ve covered one tenth of the water with that jerkbait that you could have covered with a lipless in the same amount of time. Yeah this stuff is basic, but is it really?