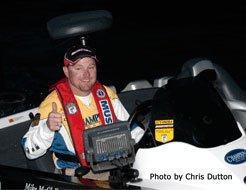 Whoever first said that politics makes for strange bedfellows probably hadn’t spent much time around professional bass anglers. Simply put, some of the friendships and relationships that develop on tour make even the most disparate and antagonistic political personalities seem like two peas in a pod.

In a field full of outsized personalities, no road roommates come off as more different than Oklahoma’s Jeff Kriet and Mike McClelland of Arkansas. They’re not quite as repellent as oil and water – they’re more like peanut butter and chocolate, two things that shouldn’t mix together but somehow manage to do so.

They’ve roomed together since the inception of the BASS Elite Series in early 2006, and their friendship shows no signs of abating, but there have been a few hurdles and speed bumps along the way. Most notably, they’ve clashed over hygiene and cleanliness.

“I had roomed with Doug Garrett for five or six years and we pretty much had the same habits,” McClelland said. “But Kriet, he’s simply a mess. When he gets to the room, whatever he’s got on ends up on the floor, in no order at all, and it stays there until I give him grief.”

McClelland also noted that Kriet has something of a “drinking problem”: “He opens up about a half dozen cans and bottles of Diet Dr. Pepper a day and he probably only drinks one or two of them. The bottles stay there until we leave unless I pick them up.”

Kriet said that having McClelland with him is like living with his mother. “He nags me about being neater, about cleaning my truck and my boat. He even nags me about eating breakfast every day. But the cleaner he tells me to be, the dirtier I am.”

While this odd pair has developed a strong partnership, a deeper examination into their habits and preferences makes that seem unlikely, if not impossible. They can’t agree on even the basics, things like food, music and television.

“I like hot wings and he can’t eat chicken,” McClelland said. “If we get pizza, he likes something real basic, meat and cheese, and I like a few vegetables on it. And he wants way too many hamburgers. He’d eat hamburgers four or five times a week if I let him.”

Kriet is similarly repulsed by McClelland’s frequent cravings for Mexican food, but he does admit that McClelland makes the best spaghetti he’s ever had. But even that moment of peace results in discord.

“He cooks the spaghetti and I attempt to do the dishes, but usually he gets frustrated with how I do them and takes over,” Kriet admitted.

They are similarly unable to agree on music.

“His music is horrible,” Kriet said. “It’s some sort of rockabilly, hillbilly crap, that country-rock stuff.”

McClelland disagreed: “I like classic rock and roll and country, which Jeff hates. He likes that hip hop type music, I don’t even know what you call some of that stuff.”

After a long day on the water, they can’t even settle on a TV show.

“He likes NASCAR and I hate NASCAR,” Kriet said. “Oh look, another left turn,” he added, voice dripping with sarcasm. “If he could, he would watch the Weather Channel 24 hours a day. After a while I just tell him it’s going to do what it’s going to do and there’s nothing you can do to change it.”

“He’s into that UFC on Spike,” McClelland said, and then proved Kriet’s point when he added “I’d just as soon watch the Weather Channel all the time.”

With all of the time they spend together, surely they’ve amassed a lot of dirt about one another, right?

“Ask him why everyone on tour calls him Pee Paw,” Kriet ordered. “It’s because he’s like an old man sometimes.”

But McClelland got the last laugh when he explained the reason that he, Greg Hackney and Kevin VanDam, among others, call Kriet “The Squirrel”: “Last year at the Tulsa Boat Show, Kriet was giving a seminar and as he went on, people started flocking in. The crowd got bigger and bigger. He thought they were all there to see him, but they were actually there to see Twiggy the Squirrel water ski. We constantly remind him about that one.

Tied Together Through Fishing

Despite their differences off the water, competitive bass fishing ties them together. But even in that common arena they’ve managed to stake out different territory. Kriet is a noted finesse fisherman while McClelland relies more heavily on power techniques.

“We’re actually pretty similar, though,” Kriet said. “We both like to fish offshore.”

McClelland agreed: “We’re not bank beaters and our styles mesh well together. We’re very similar because we’re both thorough. We look at different areas of the lake, but we’re usually fishing the same kind of structure. He’s just a super fisherman all around.”

Most importantly, they agreed that they share information one hundred per cent, and that benefits both of their careers. Still, Kriet aims to grab a bit of McClelland’s mojo when he gets a chance.

“He’s a winner, he’s a closer,” Kriet said. “He’s won five Bassmaster events, two Elite Series events. I haven’t figured out how to close one out yet.”

Will This Partnership Last?

With their differences more obvious than their similarities, one might think that they’d both be on the lookout for opportunities to find a new roommate at the earliest possible juncture. Not so.

“We’ve been doing this for two years and I’ve never been as comfortable,” McClelland said. “Sure, I give him grief now and then, but he’s taught me to roll with the flow and he’s the type of person who would do anything for you.”

Kriet agreed that “it’s going to last a long time” and he admitted that “I wear him out a lot more than he wears me out. He’s the best roommate that I could ever have. Sometimes I get fired up and he keeps me on an even keel, so we’ve found a happy medium.”

But Kriet is still convinced that he can change McClelland down the road.

“He’s not as squeaky clean as he seems to be. Deep inside he’s got a dirty part to him.”