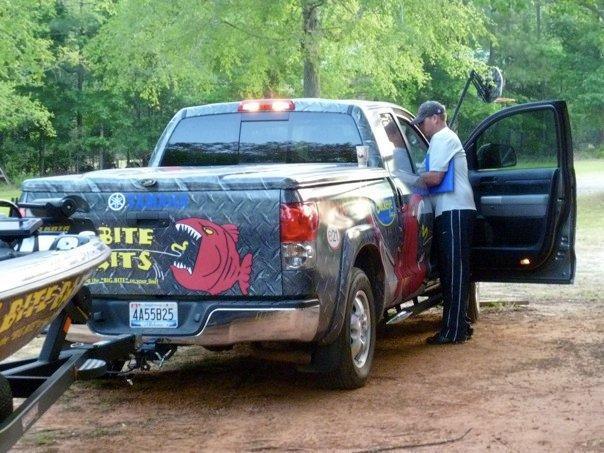 My Week as an Elite (roommate)

Every moment not on the water is time lost.   Fish lost.   Money lost.

I saw it last night. I saw it this morning, in person, with my roommate this week, Elite angler, Russ Lane.

Don’t think this is a guess on his part. Last night, I watched as he walked around the back and front yard trying to get a lock on his iPhone GPS. I knew he had it when he almost stopped mid-stride.

Then he hit the app he has for boat ramps; it told him of some in this area. He then put those coordinates into the map he pulled up that had his present location marked, and then hit “¦ GO.

He knew last night that his boat was 14 minutes from water.

And Russ has been on the move like this FOR A WEEK.   Started last Sunday as he left for the Pride of Georgia event in LaGrange, Ga.

Here’s what he went through in the last 48 hours:

Russ’s flight had to check in at 3:45 p.m. on Saturday. I saw him walk into the backstage area, where the holding tanks for the fish are, at 4 p.m. “¦ 10 &frac12; hours since he got up “¦ by 5 p.m. he was back at his rental cabin and packing up his truck for the next tournament here on Lake Murray.

You don’t think time matters, listen to this:

“I got up early today (told me this Sunday night) because I knew it was a 5 &frac12; hour drive to here but I had to fill up both my boat and truck with gas and that takes 25-30 minutes because you can only put in $75 dollars at a time on your credit card, then you have to stop, walk in, get approved, go back, do it all over again “¦ my boat alone takes 75 gallons.”

“Depends on how you run db, lasts a little longer in practice, I put 89 rated gas in it and I figure I probably average out over the week at about 3.5 MPG”

I won’t complain around him about the 7.5 MPG I get with the db/bb/rv.

This morning I was up around 4:30 a.m., my normal email answering time, Russ got up at 5:45 “¦ came out of his room, walked over to the Keurig coffee maker, put a Donut Shop coffee pod in it, hit the button, walked back into his room, took a shower, came out as the coffee was steaming in his mug, grabbed a Cinnamon Roll Pop Tart and walked out the door to his boat parked behind the house.

The sunrise was just clearing the roof of the house next door.

And this was the last thing Russ said to me as he was leaving.