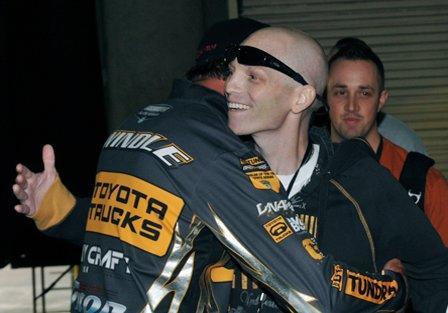 This was a special Bassmaster Classic for a number of reasons. It was a renewal for New Orleans, hard hit by Hurricane Katrina and the Gulf Oil Spill. It was win number four for Kevin VanDam. It was seeing Brandon Palaniuk paying tribute to Bryan Kerchal. It was  seeing my buddy Kevin Oldham ride into the Classic arena with Gerald  Swindle. The tide of emotions ran deep.

This was my 21st Bassmaster Classic. To be honest, I normally get up for them  but this one created a new standard. I had been planning this trip months in advance. Reasons for that later.

New Orleans opened its scarred arms to fishing folks, those that love the outdoors, those that see the world for more than buildings and cars. Outdoors people are a different lot. They are generally a friendly bunch and love to talk about the sport they love, but it was taken to a new level at this dance. Seeing people embrace each other for time missed, being busy  in other places, chatting with  people new to the sport and talking to the stalwarts that have covered the sport from its early days were  all in the mix.  I got to spend time with Steve Price, one of my  journalist heroes, Don Barone, the wizard of Word and folks from the  companies that make this sport go.

Folks like Forrest Wood, Larry Nixon, George Cochran,  Ray Scott, Jerry McKinnis,  Ray Murski, and Glenn Lau were all there. I got to take it all in and do so through the eyes of a very special friend, Kevin Oldham.

Kevin’s story, to some, is a very sad one. A strapping young man who is a die-hard bass fishing nut, a great father and husband, a firefighter, and a young man who is fighting pancreatic cancer. A man who once weighed 205 pounds and was solid muscle is now 150 pounds. A man destined to take on what life has given him head on and do what he can to help others, even while fighting for his life. He doesn’t feel sorry for himself or ask “why me”. He never has.

His journey with me started last spring. I was the master of ceremonies at a Bass University in Nashville. A few of his friends, fellow firefighters, attended and we became friends. When I got home I received a very special phone call that changed my life. An angel by the name of John Carrier, made a call to me asking if I could get a few anglers to give him a call. He specifically mentioned Gerald Swindle, who he knew lost his brother Tony to pancreatic cancer earlier.

He told me Kevin’s story. I told him I was all in and those that know me know that when I am all in, I am all in. I got on the phone that day and called Gerald. “G” told me he would call but later told me he wasn’t sure if he could actually make that call. His brother’s memory was still fresh and he wasn’t for sure the words would come out if he called. His wife Leann pressed him to make that call. She and Gerald were together when that call was made and they both cried.

Gerald told me this week “T, I have never let you down bro  but I wasn’t sure I could keep that promise that day. I did and it was the best thing I ever did. That call was a special place in time I will never forget.”

It could have ended right there, and it would have been a great story. But I had the opportunity to speak with Jerry McKinnis and told him about Kevin. His firefighter brothers wanted to bring him to the Classic. I told Jerry it would be neat if we could do something special for a “B.A.S.S. guy” and he too was all in. He and I spoke of several surprises. Getting his folks involved and making this a very special event for Kevin was the goal.

Angie Thompson, another angel got involved. She did the work of a hundred people behind the scenes setting it all up. I again spoke to Gerald and asked if he would help. He too was all in. Gerald suggested cutting his hair in a Mohawk, as part of the Mo-hawk Less Cancer that Kevin had started when he found out he had the disease. He decided against it because he felt the Mohawk would get more press than Kevin’s story. Gerald Swindle has a huge heart, and I will never forget what he did.

We had planned to have Kevin  on the floor in the “Livewell” and when he  walked on stage emcee Dave Mercer would read a special tribute to Kevin from Gerald, and Gerald would give him one of his jerseys. That didn’t happen, as Kevin’s buddies had to take him to Tulane Hospital to have his stomach drained of  fluid to  alleviate some pain. He arrived after Gerald had weighed it, but what happened next was even more  amazing. Back stage Gerald presented Kevin with his jersey  with his friends standing beside him. This too was a moment I will never forget.

It wasn’t over yet. Another surprise was in the making that only his friends, a few B.A.S.S. folks and I knew about. Day two he was riding into the Classic with G. On Day Two, we walked the the Classic Outdoor Show and we knew we had to leave early to get to the boat yard. B.A.S.S. made a special concession to allow us in. We sat near the area where the anglers are staged and every angler came over and spoke to Kevin.

I asked Kevin if he was saved. “I couldn’t have made it this far without his Lord and Savior Jesus Christ,” he said.

He is not afraid of dying and never has asked ‘why me’.

“We are all in line, just some of us have a position more near the front,” he said.

A calm I had never felt before came over me and I knew this was a very special time. Although he had already changed my life for the better, I too now celebrated his life with him. It’s not about dying but its more about living and Kevin Oldham is a testament to that.

Shaw Grigsby came over to see Kevin, spoke to him for a few minutes and noticed he had Gerald Swindle’s jersey on.

“This will never do,” Shaw said as he ran back to his truck. He returned with one of his jerseys and told him to wear it when Gerald came over. His buddies and I hid Kevin behind us when Gerald arrived and when it walked out wearing Shaw’s jersey the moment was priceless.

“This will not work, get that green jersey off, we have work to do,” Swindle said.

Kevin and his friends went over to Swindle’s boat. This was their private time together, brothers held together by two common threads, firefighting and their love of Kevin. Kevin VanDam stopped by with them and they spent 30 minutes or so together, G, KVD, Kevin and his buddies. As they drove towards the weigh-in we scurried to get inside to watch what was about to happen. The moment when he drove through the curtains onto the stage time stood still. His smile was from ear to ear and there was not a dry eye in the place. Photographers like Dan O’Sullivan and Alan McGuckin told me they just pointed and shot because they couldn’t look through their viewfinders because of tears. It was a surreal moment I will never forget. 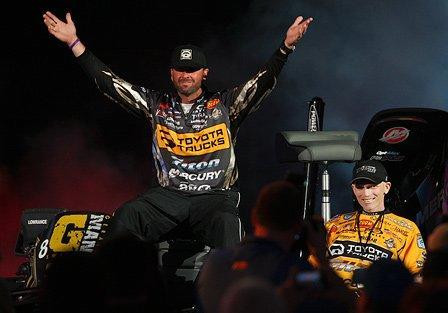 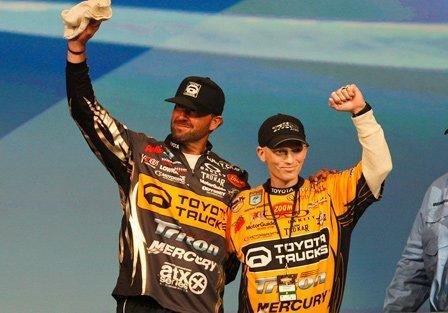 The last day of the Classic, Kevin was a “rock star”. He signed autographs and fishing folks spoke to him. Kevin Oldham got his wish that day. Not to be the center of attention or a superstar but rather to   make a difference. Kevin is a fighter and that fight drives the human spirit. I am honored to call him a friend. I am in line with you bro and you hold a special place in my heart. I have eight new brothers from the Waukegan Fire Department Local 473, and you are the reason my friend.

Thanks to Don Barone and Alan McGuckin for putting into words what I could only think. Check out his blog here at Wired2Fish for his story on Kevin Oldham. It touches the heart.