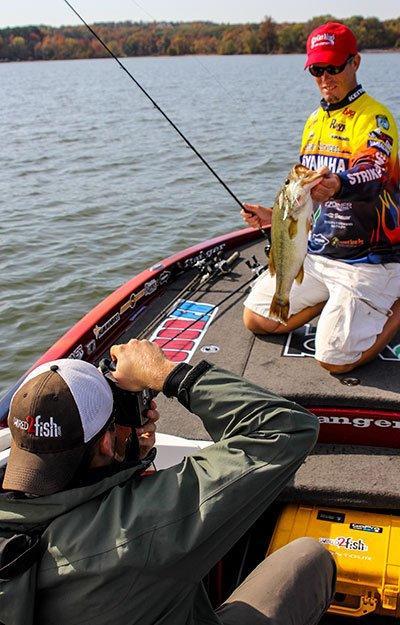 We’ve all heard the quote “There are two things you never want to see made: sausage and legislation.” As a country kid who grew up seeing his father make sausage from freshly slaughtered pigs and who spent some time covering politics as a newspaper reporter, I can attest to the validity of the statement.

Lately, however, I’ve been wondering if another process doesn’t need to be added to that list: pro staff/sponsor interaction. Anglers, for their part, feel squeezed from all sides, what with high entry fees, tough-to-come-by sponsor dollars and the ever-increasing cost of travel. Sponsors, too, are in a vice, struggling under the weight of sluggish sales, frequent top-down cuts to overall spending and marketing budgets that grow about as swiftly as the economy of Greece.

The pressure can make for an uneasy relationship, at best. Pros are often being asked to do more for less money, and at a time when they cannot afford to lose a sponsor; Manufacturers expect more, pay less and are quick to pull a deal off the table at the slightest sign of a balk on the behalf on an angler.

As I have said before, manufacturers (and tournament organizations) have the upper hand.

“What (pros) want and what they bring to the table is out of whack,” said the vice president of a Midwestern tackle company. “I have pros who haven’t won a tournament since…they were a co-angler asking me for more money. But if I ask him ‘Hey, I need you to work two shows for me in January and do a couple of appearances during the season,’ they look at me like I have a horn growing out of my forehead. Everything they do…I don’t care how small it is, they want me to pay them an ‘appearance fee’ if it’s not written into the contract. You have to get nasty with them sometimes…saying ‘If you don’t sign this contract, who does it hurt (more)? You? or me?”

The conversation above might seem like an anomaly to some, but it’s one of the variety I have at least twice a month. Admittedly, I see and hear things a little different from most media members, mainly because I cover a side of the business that is largely ignored. That doesn’t change the fact that the sponsor/pro staff relationship is, in many ways and for many companies, broken.

My three-step plan for fixing the fractured relationship includes…

1.    Anglers have to drop the attitudes.

No one wants to do more for less, but when you are negotiating from a position of weakness, your options are bleak. The only alternative is to chase after numerous small contracts, which can often result in being even more frustrated. If you signed on the dotted line, the expectation is that you fulfill your responsibilities, first and foremost.

If you desire to see your contract renewed, your job should be to go above and beyond, which means having the initiative to ask sponsors if there are additional duties you can perform, other areas of the company where you could be of use. A chief complaint I hear from anglers is “companies knock (your contract) back” after a bad year or two, so why not make yourself indispensable (at least as much as possible) by creating opportunities beyond on-the-water performance?

2.    Anglers must understand that the game has changed.

Long gone are the days when sponsors looked after a pro, even when his best years were behind him. No news there, right? What is news for some, however, is that even pros who perform on the water and off, through events and such, are on a much shorter leash than ever before.

As I have said numerous times, the name of the game is selling products, extending the reach of your sponsor’s brands, which is only significantly impacted if (a) you win a tournament and (b) you are already a household name. See the problem there: You cannot guarantee a win, and last I checked there is really only one household name (KVD) that moves products. That means companies are always on the hunt for the hot stick, not necessarily the best overall stick.

Instead of trying to be the best or the hottest stick, work to be the most marketable stick, which is greatly aided by your becoming the best salesman possible. Don’t believe me? Take a second and look at the list of Elite Series or FLW Tour pros who have not won a major event in years, if ever, but who continue to get new sponsors and hold onto existing ones. What’s the commonality? They can sell.

I’ll admit that I’m a little bit “biased” when it comes to the whole angler/sponsor relationship. While I have an affinity for many of the anglers on tour, my business most often puts me in touch with sponsors, so I hear their side of things more frequently. One thing I do challenge sponsors with is the need for more transparency. They must, somehow, find a way to share with their pro staffs just where the relationship is at a given time.

I’ll use a recent example to make my point. While talking to a pro staff manager of a well-known company, the topic of contracts came up, and I asked about a popular pro.

“He hasn’t really done it for us like we thought he would. He’s done well…but when you look at what we are paying him…I cannot justify renewing (his contract.)”

Since this pro’s contract was not up for another year, I asked if the pro staff manager had shared his feelings with the pro.

“Things will run their course, Ronell. He knows what we are paying him. He knows he isn’t performing. When the time comes, I’ll make a decision based on the facts.”

Only it’s not so simple. See, the pros contract covers far more than tournament wins. And though he admittedly wasn’t getting it done on the water, he likely did think he was making up for it in other areas, such as product design, product testing and media exposure. That’s not how sponsor sees it.

The items above are just three of my ideas for fixing what I think is a broken system. I’m sure there are numerous others. I’d love to see your thoughts. Agree? Disagree?