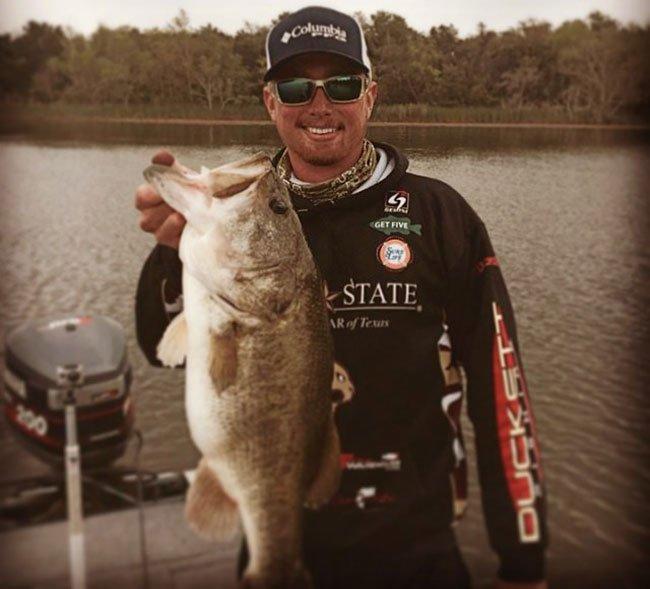 Have you ever taken a long look into your heart, soul and mind and asked yourself why you love this sport?  How is it that a little green fish with a pea-sized brain has such an unwavering hold on you? Maybe it helps you relax. Maybe it satisfies your competitive spirit. Maybe it’s just all you’ve ever known. Or maybe, as is the case with 24-year-old Texas State University angler David Cosner, it literally helps you survive.

I believe, with everything I am, that God places certain people in our lives to teach us imperative lessons. Some of these people might teach us perseverance while others may teach us how to love deeper than we ever knew possible. Today, however, an angel in the form of David Cosner taught me about perspective.

This piece isn’t going to teach you how to flip a jig, drag a worm or work a topwater frogâ€”it’s not about bass fishing. It’s about becoming a better person.

The runny nose that changed his life 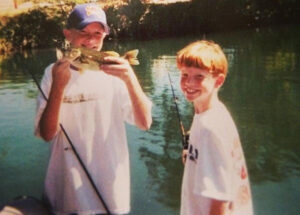 Like many of us, David Cosner enjoyed a childhood that largely revolved around bass fishing. Whether he was on the bank, on a dock or fishing a tournament in his dad’s bass boat, the sport of bass fishing filled him with joy, tranquility and most notably, a steadfast dream of becoming a professional angler.

“I describe my disease like thisâ€”it’s a liberating experience I wouldn’t wish on my worst enemy. It has shown me how to live my life. We should all help others, enjoy everything and never feel guilty about taking time off work to do something we love. Life is a fragile, fragile thing.”

Fast-forward to 2006. As both his fishing talents and dreams continued to grow, 16-year-old Cosner was enjoying a family trip in California. He began feeling a bit “off”, with a runny nose not even the strongest over-the-counter medicines could tame. Initially shrugging it off as allergies or sinuses due to the change in climate, his condition continued to worsen after he returned to his Austin, Texas home.

“I started losing a lot of weight, I was coughing nonstop and blood started coming from my nose and eyes,” Cosner said. “I was 6-foot, 4-inches and just 145 pounds. After bottles and bottles of antibiotics, nothing was working. I couldn’t even walk downstairs without being winded, so I made an appointment with my dad’s Ear, Nose and Throat specialist. On my September 20, 2006â€”my 17th birthdayâ€”they took a biopsy from the inside of my nose. Two days later, we got the results.”

On September 22, 2006, Cosner’s life changed forever. He was diagnosed with Wegener’s granulomatosisâ€”a very rare disease that causes the inflammation of blood vessels. The disease had attacked his lungs.

The start of something great 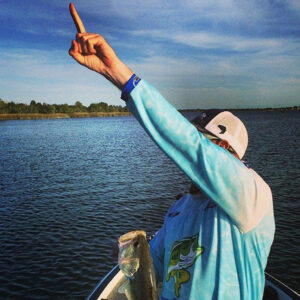 “At the time of my diagnosis, I was super sick,” Cosner said. “I immediately started chemotherapy and countless doses of anti-inflammatories to calm the disease process. I spent three weeks in the hospital and had to withdraw from school while I continued my chemo treatments for another year.”

A self-proclaimed “stubborn guy”, Cosner was determined to keep fishing. One afternoon before his freshman year at Texas State University, he saw college fishing on television. From that point forward, he knew what he needed to do.

“I spent the entire summer putting together the necessary plans and paperwork to start a bass fishing club at TSU,” Cosner said. “By the time I walked onto campus, I had everything done and ready to go. I was ready to start fishing.”

Despite his debilitating illness, Cosner and his partner, Jay McCollum had a miraculous first season. In their first tournament of the year on Lake Falcon, they finished in 15th place before winning their second tournament on Lake Amistad, qualifying them for the Texas Regional Championship on Sibley Lake in Natchitoches, Louisiana.

Throw it in me and I’ll go fishing

“I had been in the hospital for two weeks prior to the Regional Championship,” Cosner said. “At this point, my health issues were becoming much more complicated. I was having two to four lung surgeries per monthâ€”currently I’ve had over 180 lung surgeries in six yearsâ€”and I had to be on a PICC line, which was an IV that went into my arm and directly to my heart. I had chronic pneumonia and things were pretty rough.”

“I couldn’t leave my partner hanging and I wasn’t going to let this disease take something so sacred from me.”

This wasn’t going to stop him, however. He was going to fish the big tournament whether his doctors liked it or not.

Although a tube going into one’s heart would likely sideline even the strongest of human beings, Cosner did what he does best. He went fishing. And wouldn’t you know it, “Mr. Stubborn” finished in second place and qualified for the FLW National Championship eight months later. Something most healthy people can’t do.

That’s when things got scary. 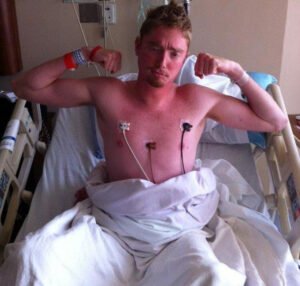 As the national championship neared, Cosner’s medical situation was in a constant state of flux. He’d have some good weeks periodically, but he’d also some bad weeksâ€”really bad.

“Four months from the tournament, I went into a ten day coma due to a bad lung infection,” Cosner said. “The doctors ended up surgically removing two-thirds of my right lung and they honestly didn’t think I’d live. I pulled through, but I actually had to relearn how to walk. When you’re in a coma and not moving for ten days, it’s amazing what you can lose.”

After returning home to start a long, arduous rehabilitation proves, all he could think about was the biggest tournament of his lifeâ€”the national championship.

“The date just kept sneaking up on me and I was worried I wouldn’t be ready,” Cosner said. “I went back into the hospital two weeks before the tournament and was released again just one week before the first day of competition. When I got home, I just packed up my truck and headed to Fort Loudoun Reservoir. I had a job to do.”

The first creek Cosner visited on the first day of practice proved to be pivotal. After catching two giant bass in the first 15 casts skipping jigs under docks, he and his partner committed to a game plan. They were going to bring three rods per person, two boxes of jigs and flip and skip their way to victory.

“We were in first place by about a pound going into the final day of the national championship,” Cosner said. “On the final day, we came to the scales and were just 9 ounces short of winning the championship. If I’d have won, I would have fished in the Forrest Wood Cup, but it just wasn’t my time. I felt blessed to be healthy enough to fish.”

This year, two years removed from fishing, Cosner is ready to pour his heart and soul into his senior year of college fishing and things seem to be falling right into place.

“I’m finally healthy enough to complete my senior year,” Cosner said. “The doctors have given me the all-clear to return to school and I’m partnering with Jed Holt, a great local angler, and we’re going to be competing in both circuits. I’m absolutely pumped and I believe we can do some really great things. I’m not letting my disease get in the way of my dreams.”

Cosner and I talked for quite a while today and I can confidently say that I have never met anyone with such an inspiring spirit. Now, I could end this article by trying to cleverly paraphrase some of his thoughts and add some feelings in-between, but that doesn’t do this young man justice.

This part needs to be all about him. Not some fishing writer guy.

“No matter what, you have to stay positive regardless of your circumstances. There’s a reason for everything. I was in a second coma a few years ago for 14 days and was in the hospital for over a month with a 15 percent chance of living. I had to relearn how to walk for a second time. When something like that happens, it puts everything into perspective. When you don’t have the strength to hug your parents or open a milk carton, you realize how much everyone takes for granted. It makes a bad day of fishingâ€”or heckâ€”even a day out of the hospital the best day ever.”

“Don’t ever let someone tell you something is impossible. It took me a week to walk from my hospital bed to the door, but I walked into the hospital and I was determined to walk out of it, too.”

“I’d be weird if I wasn’t a little scared, but at the same time, I’ve been blessed with a huge appreciation for life. The normal, small things that make most people angry just don’t bother me anymore. There’s a valuable lesson in my diseaseâ€”take risks and make your life count. Get up and try it again without making excuses.”

“Now the doctors are talking about giving me a heart AND lung transplant, which is pretty much the most serious surgery in existence. I have to make a decision about it and at this point, I’m open to trying it. I’ve got two fish in the livewell at 2:45 and it’s time to make a move.”

“I describe my disease like thisâ€”it’s a liberating experience I wouldn’t wish on my worst enemy. It has shown me how to live my life. We should all help others, enjoy everything and never feel guilty about taking time off work to do something we love. Life is a fragile, fragile thing.”

“You know how sometimes the bass just won’t eat a jig and you have to adapt? That’s kind of how this disease is, man. I can’t get all spun-out and try to force anything with it. All I can worry about is what I can actually control.”

“I feel like I was given this disease to prove you can do anything. And I fully intend on doing that.”

“I may huff and puff, but I’m going to chase down my dream and catch it.”

“I wouldn’t be this strong without the support of my loving family. My mother, Christine, my dad, Don and brother, Dylan have been instrumental in my fight and attitude. I also thank God above because without Him, I am nothing.”

David, buddyâ€”the whole Wired2Fish crew wishes nothing but the best for you. You’re an inspiration to us all and you’re continuously in our prayers. 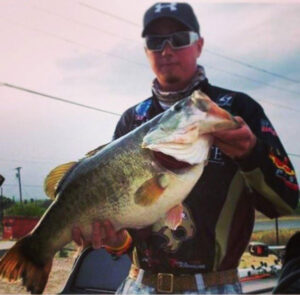