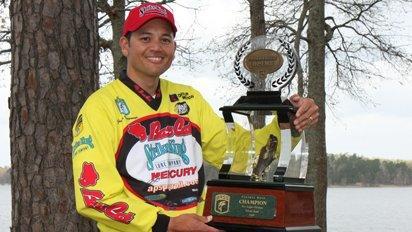 Denny Brauer did it.

So did Larry Nixon.

It was just about de rigeur for all of the old school pros, looking to stay sharp and make ends meet between tournaments. “It,” of course, is guiding, and with the advent of made-for-TV pros like KVD and Ike it has become less of a stepping stone to the pro ranks in recent years.

For Texas-by-way-of-California pro James Niggemeyer, though, right now there’s a serious case of back to the future going on.

When he first set out to earn his stripes at the national level in 2001, Niggemeyer settled on the shores of famed Lake Fork and gradually built up a successful guide business. But when he qualified for the Elite Series, which then featured 11 events from March to September, he couldn’t serve his clientele as well, so he turned many of them over to fellow guides. Now, he said, he “hardly ever get(s) a call.”

But that’s about to change because with the Elite Schedule confined essentially from March through July, he has time to get back to his guiding roots and he’s excited about it.

The first reason, of course, is financial: “Even if you have a banner year on the Elite Series, you still need to have some sort of additional income,” he said. More importantly, though, it gives him a chance to stay in the mind frame necessary to compete at the highest levels. After a breakthrough year in 2009 he slid back a bit in 2010 and doesn’t want a repeat in his next campaign

“It’ll help me stay fresh and stay current,” he explained.

Perhaps most importantly, he simply misses the process.

“I love getting out on the lake and keeping up with the fish,” he said. “Otherwise it’s easy to get lazy and stop learning. I think this will help with my ability to make crisp decisions. In a tournament, you spend three days practicing and you lock into what you think is going on. On Day One, it might work like clockwork so even though you can feel things changing you’re reluctant to change on the fly. When I’m guiding, things may be dying or drying out, but I’m more relaxed and more able to make a total change.”

“You might start off fishing deep,” he continued. “But later in the day, you can go shallow to the lily pads and pick off some fish there and salvage a day. At tournaments, you’re focusing on making the Classic. At each event you want to get as many points as you can and that makes it tougher to shift and leave.”

While the average guide trip may be a matter of catching more fish and bigger fish, Niggemeyer doesn’t want to limit his service to those sorts of deals. Catching fish is good but the best trips, he believes, are the one-on-one instructional efforts. Because Fork is a diverse laboratory, not only can he teach an angler how to use electronics and run the boat lanes, but depending on the season he can also give them a tutorial in deep cranking, swimbait fishing, frogging, even dropshotting. He likes the instructional trips because not only does he feel like he accomplished something for the client by the end of the day, but also because in order to teach properly he has to break a technique down to its component parts and relearn it himself.

He’ll also try to expand on what his client is doing. “For example, say it’s summer and it’s a structure deal,” he explained. “My client may be catching them on a football jig or a Carolina Rig. I’ll do something different. I’ll experiment and fine tune. If a half ounce jig is the ticket, I’ll try a one ounce and maybe fish deeper. Or I’ll fish off the sweet spot, off to the side of schooling fish to try to figure something else out, maybe catch a bigger fish.”

His personal favorite cover to fish is shallow in the grass, but Fork also gives him the option of standing timber, bridge cover, offshore structure, even lily pads. “Depending on the time of year, you can do just about everything – deep cranking, lipless crankbaits, dropshotting with 6 pound test fluorocarbon, or a client can learn how to fish the Sexy Spoon that became famous there.”

More importantly, every time a client goes out, he has the chance to catch a fish of a lifetime, and even if he doesn’t, Fork’s slot has led to so many three to seven pound brutes that they almost always return with tired arms.

While a guide fee may seem a little steep at first, he explained that “a couple of guys can go a couple of times a month and it still doesn’t add up to a boat note.” For the corporate titans of Dallas who have their own boats but may not have a chance to get them ready, it’s a turnkey operation – show up, hop in the guide’s boat, catch fish, repeat. For those who are newbies, it’s a chance to get their feet wet.

It’s also a chance for the affable pro to put his sponsors’ products in front of new sets of eyes. He can give them hands-experience with the latest and greatest products and when that leads to personal best catches, the sales are almost automatic. He knows of several Bass Cat Boats that were purchased shortly after a client rode in his

Those who think that the pressure ends for Niggemeyer when he’s not out on the tournament trail couldn’t be more wrong. Every day he feels the need to produce for his clients. In some respects, it’s even more gut-wrenching than the Elite Series.

He wouldn’t have it any other way.

If you’d like to book a guide trip with Elite Series pro James Niggemeyer, he can be reached through www.jamesniggemeyer.com.