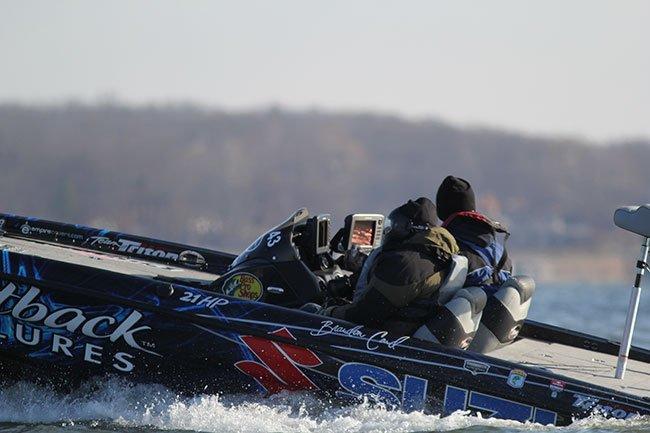 I used to use Sticky Notes to keep track of the things I needed to get done over the course of a week. Now, instead of small bits of paper, my desk is littered with notepads of all shapes and sizes, and in each I scribble details from interviews, jot down random thoughts and keep track of tidbits of information that can be shared via Facebook or Twitter.

At the end of each week, I take inventory of all the important information from interviews, perusing it for any similarities, hints, clues, signs of things I missed or could have done better.

More important, I look for common threads, things that kept coming up, whether in conversations, thoughts, emails, texts or in-person interactions. When I looked over last week’s notes, the commonality slapped me across the face: We can do better.

I’m not picking on just the pros here, either. As a matter of fact, much of the reporting I do on a daily or weekly basis has little to do with professional bass fishing. But usually in the course of conversation folks will share a complaint or voice a pet peeve that I might totally miss at the time, only to recognize it after it’s said for the third time by someone else.

For example, last week, while writing a piece for the newsletter, I came across a quote from Jeff Pierce, head of sales for Mustad, where he singled-out the relationship with his pro staffers as invaluable to creating new products. “It’s critical to have the right guys,” he says, “and I’m not just talking about national guys, like Denny (Brauer) and Kevin (VanDam). The regional guys are important, too.”

The truth of the matter is that most of us, despite our desire to will it, might never be the household name we imagine ourselves as, but we can still make an impact.  Here’s a simple checklist of things to think about whether you’re trying to join a staff or already enjoy such privilege:

1.    There’s a fine line between persistence and annoyance. It’s OK to reach out to a contact and gently ask if they received the email you sent or the voicemail you left; It is not cool, however, to pester someone to the point of continuously emailing or calling them. If you sense the level of contact is excessive, then it is excessive. It’s likely better to connect through a mutual friend or acquaintance anyway. Remember, most people in this industry hold the opinion that if you’re worth their time, they should already know who you are.

2.    Social media is now part of your resume. Spend anytime around Facebook and Twitter and you quickly wonder “What were these guys thinking?!” Whether it’s offensive language, vulgar images or derogatory comments about nothing in particular, all of this stuff lives on and is out their for sponsors and potential sponsors to see. Believe me, they are looking. And before you think you have your Facebook page all sewed up so no one can view your posts or images, remember that it’s easy for your friends to “share” them.

3.    Understand that it’s not about you. Even if you win every tournament you enter, your sponsors won’t be satisfied. What they really want to know is how willing you are to work shows, travel to film TV spots or stay after hours to meet with media and fans.

“What makes KVD so great isnt’t just that he’s won everything,” said one of his longtime sponsors. “The guy is tireless at staying late to do interviews with our staff for the web and he’s always willing to be a part of events that we sponsor. He doesn’t pull out his contract and say ‘You know, that’s not part of the deal.’ “

4.    Your ego will starve you to death. I hope by now we’ve all come to realize the farce that is “You just need to catch ’em.” Even if you hook every bass that swims, if you are difficult to deal with, your career will be shorter and far less fruitful than it could be. The way companies see it, there are enough good guys out there that they don’t have to put up with jerks who blow off interviews, use foul language at events, never hang around to sign autographs or who frequently get testy for no apparent reason.

More and more, this behavior is being tied to character, and you would not believe how many times a blow up, whether on stage or on the water, has cost a pro sponsorship from a company that was looking to bring him aboard. Words travels fast. Instead of good sticks, companies are looking first and foremost at good people.

A great example involves a  now-well-known pro who, a few years back, was coming off a rough few years. One of his major sponsors was looking to boot him, but right before he did, he mentioned to a media member that the angler was on the way out.

The media member shared these thoughts:

“I can’t speak for anyone else, but I know that  no oneâ€”and I mean no oneâ€”sticks around longer to talk to fans or is more willing to do interviews or is quicker to pick up his phone when I need him.”

Nearly six years later, that pro is still on the staff and totally unaware of what was about to transpire.

Remember, I’m not just talking to pros or potential pros. I’m talking to the entire industry, even myself.