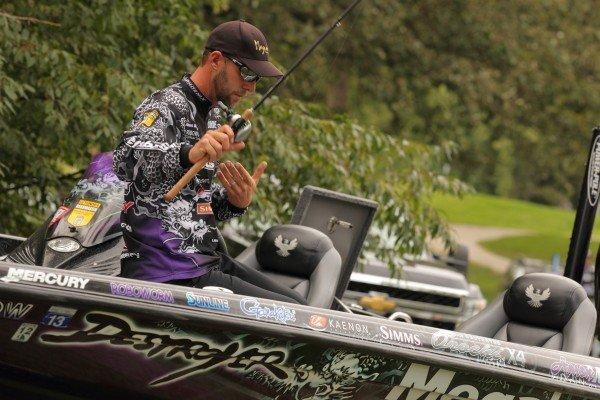 I spent some time in the boat yard at the Toyota All Star event in Decatur, Ill., with some of the best pros in fishing. Kevin VanDam, Aaron Martens, Matt Herren, Terry Scroggins, Gerald Swindle, Brent Chapman, Edwin Evers, Ott Defoe, Randy Howell, Todd Faircloth, and Skeet Reese were all there working on tackle, talking to a few fans milling around, and cutting up with each other as they prepared for the tournament.

While many of those there wanted to talk about autographs, the prior two days of practice or how much they thought they would catch, I dug deeper.  I personally, was more interested in the bait they were tying on and the approach they took to get ready. I wanted to dig into their psyche and understand the competitor. I wanted to understand the mind set, their disposition and even though I listened to their words, I watched their eyes. A few simple questions immediately came to mind. What makes them tick, how do they always figure them out and what makes them better than the rest of us? So much of this game is a mind set, swagger or confidence and I wanted to explore that with them.

All of the other Elite Series events are about points, Angler of the Year and Classic berths but this one was suppose to be more relaxed. No points worries, no Bassmaster Classic at stake, no heavy pressure from sponsors to perform or to attend functions. This was to be like other sports All Star events where the win has less importance. It is about the fans and it’s about the fun. The fans make this sport tick and it was very apparent as they came out in droves both at the morning take off’s and at the weigh in’s. For this group of pros it was time to be on their best behavior, and it was “handshake and baby kissing time.”

Watching them prepare proved much more was at stake than relaxing for a few days on a new body of water. Even though it is more relaxed with less mandatory obligations, their competitive fires still burn too deep not to creep. Sitting back and relaxing, no way.  It was far from that.

These guys are competitors, they can’t turn that off. To say it doesn’t matter is one thing. To have it really not matter is another, and this group is no different than all of the professionals who make their living catching little green fish. They live for the competition and to not care about the outcome isn’t in the cards. They are driven to compete and they are driven to win. Whether checkers or fishing, it is truly about winning. 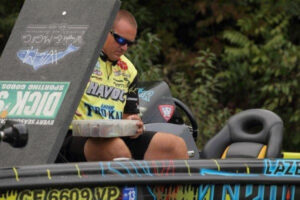 I have covered fishing for more than 25 years, and I get asked a lot of questions about the anglers. One that comes up often is “are they really that much better?” Simply put: yes they are. They are driven to an order of magnitude that weekend anglers touch but never grab or even hold. The ones that do touch it become the best and move on to the pro ranks.  They are relentless, and they have a passion and drive you rarely see in any sport. They physically never stop and while on the water their brains never stop. The little things are never glossed over and the smallest details are never missed. These guys are truly athletes.

While sitting there “relaxing” I saw KVD reline eight rods at once, Gerald Swindle change hooks on a Lucky Craft shallow running crankbait to one size larger and Ott Defoe laid out his game plan to match his tackle. I talked to Matt Herren as he dug through his plastics for the perfect color of Sweet Beaver for the water color.  I watched as more knots got tied and retied than at a National Boy Scout conference.

I watched attentively as Edwin Evers ran through his entire tackle arsenal, checked hooks and retied everything he had on the deck. His boat went from a messy wreck to a neat and orderly machine ready to hit the water. This all happened in the matter of a few minutes.

I watched as used plastic got put in a pile for the trash and I watched each angler ready their gear, all in their own unique style, for the first day of competition that “didn’t really matter”. Even though they said they were relaxed and this event wasn’t important, I saw no slacking on preparation and their game faces did not change. This wasn’t the Bassmaster Classic but in their eyes they showed it was important. They have been called some of the best anglers in the world, and they were out to prove it.

I have been in the boat with most of these guys, and I have seen how they work. They don’t know how to turn it off. Even though they are a tight group of gypsies off the water, on the water they are fierce competitors and they are always looking for an edge. What makes them better? They each have a competitive fire and drive that is without equal and skills that many of us can only dream about. Are they better? You bet they are and they all want to prove it.

Being the best fisherman means working harder than the other competitors. I watched that in action with this group of twelve pro anglers. They were still cordial, still enjoying the moment, but more important to all of them was being ready and dialed in. Rest assured they were. 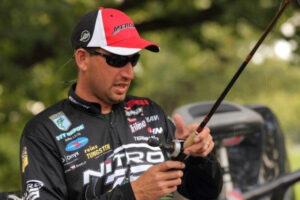