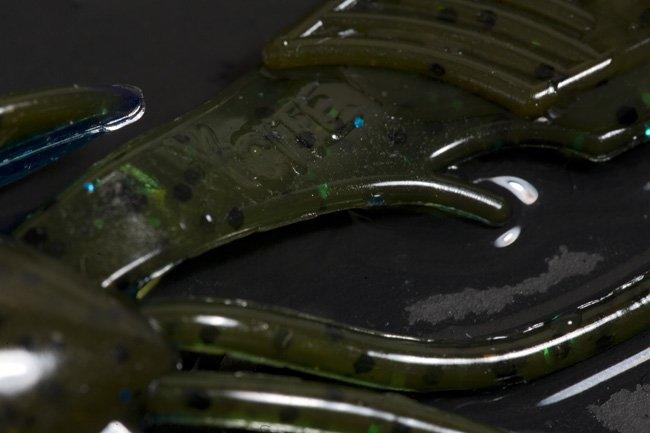 Flippidy Flabbidy Floo. I have no idea what that means, but itâ€™s something my grandmother would utter when she thought something you uttered was â€¦ well â€œpoppycockâ€ letâ€™s say on this â€œG-ratedâ€ site. Iâ€™ve been using it to tell folks what I caught bass on this early spring, before the bass got in the bushes and I went on a flipping and pitching terror for about a month.

â€œWhat did you catch those two six pounders on in April?â€

It was code for a time for a little bait that Elite Series pro Grant Goldbeck told me I needed to check out, the Xcite Baits Raptor Tail Jr. At first glance it looks like another crawdad bait in a long list of crawdad baits, but it offers some unique characteristics that have made it a good player this season.

The bait features symmetrical grooves on enlarged pinchers that give the arms a very natural undulating action in the water. There are appendages on the side of the bait like many other craw offerings, however we tanked this bait to really take a look at how the appendages moved. The body itself narrows toward the head but has grooved ribs that trap air bubbles on the initial drop into the water. The bait looks extremely lively in the water. The side flappers snap violently on a quick hop and they quiver ever so slightly when just subtly working it on the bottom.

The big arms and the consistency of the plastic really make the bait shine as a jig trailer and on a shaky head. The big pinchers pulse and flap on a trailer and on a jighead better than expected. When the water was a little more stained in the prespawn, we were threading the Raptor Tail Jr. on a football-head jig and dragging it around on points, humps and the mouths of spawning bays looking for staging fish with good success.

When the water got real clear there for a time before the flood waters raged, the bait was extremely effective fished on a football-shaped shaky head cast on points. In fact the first time we tried this rig, the very first cast with it netted a 5-pound largemouth. Since that time, Iâ€™ve bought several more packs to keep on hand at all times, and now itâ€™s worked into my rotation of staple jig trailers and craw imitators like the Berkley Chigger Craw, Zoom Speed Craw, and Strike King Rage Tail Craw that I like to use for smallmouths, spots and around the full moon on various fisheries for largemouths.

The Raptor Tail Jr. is 4 inches long and comes six to a pack. They retail for $3.59 on TackleWarehouse.com. They offer eight colors that we think they did a very good job perfecting. Weâ€™ve thrown three of them with good success. We didnâ€™t fish them much as a flipping bait but think they would do well for the simple fact that the pinchers didnâ€™t seem to tear up as quickly as we’re accustomed to. 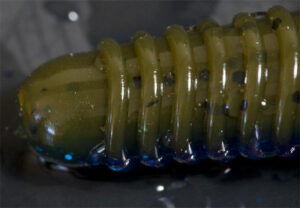 Xcite Baits is still an up and coming company, and we like this shape in their lineup very well. They do a good job with the colors of the baits, and they got the texture and softness of their plastic right in our opinion. Thatâ€™s the sign of a good company, when color and consistency of their plastic is not an afterthought to the shape of their product.

Weâ€™re firm believers that fish can get conditioned to lures. So itâ€™s always nice to find another staple bait to work into a rotation to keep things fresh and interesting for you and for the fish. Sometimes a simple color change can make the difference. Sometimes the profile and subtle differences in action can be all the difference. And even the scent. Xcite formulates their own scent and cooks it into each of their baits.

For more information on this bait, visit XciteBaits.com

To order these baits, visit TackleWarehouse.com