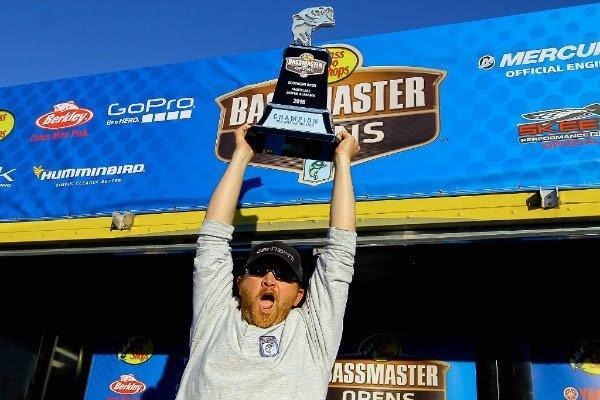 During the past two years Jesse Wiggins taught first round leader Jordan Lee a lot about fishing Smith Lake. But Wiggins didn’t share every trick in his book.

Wiggins rallied from second place to win the Bass Pro Shops Bassmaster Southern Open here today with a two-day total of 34 pounds, 2 ounces. Lee, who started the day in first place after a 20-10 bag Friday, managed a limit weighing only 9-15 and finished fourth.

“Jesse is really good here,” Lee said. “We’ve fished a couple of tournaments together, and he’s taught me a lot about this lake. It doesn’t surprise me that he won.”

Wiggins, who is from nearby Cullman, Ala., relied on two lures: a 3/16-ounce homemade shaky head jig with a 4-inch green pumpkin Senko and a topwater lure similar to a Zara Spook.

The victory earned Wiggins $52,877, including a Triton Boat and Mercury outboard package, plus a berth in the 2017 GEICO Bassmaster Classic presented by GoPro. Wiggins must compete in Southern Open #3 at Tennessee’s Douglas Lake next month to finalize the Classic berth.

“I’ll be there with bells on,” Wiggins said.

Lee, who grew up in Cullman and now lives in Grant, Ala., wasn’t the only angler who struggled Saturday. The number of five-bass limits caught dropped from 164 Friday to 150, but the number of bites shrunk considerably more, even for Wiggins.

“Overall I caught way less today,” Wiggins said. “Yesterday I had a limit that weighed 16 pounds in the first 20 minutes. Today I had a limit at 9 o’clock, but luckily they were all 3-pounders.”

Wiggins weighed all spotted bass Saturday; his five bass Friday, which weighed 18-15, included a 5-pound and a 4-pound largemouth.

“I threw the shaky head in the morning for bedding fish,” Wiggins said. “I couldn’t see them, but I knew where to throw it. Later in the day, I’d go up the river and throw that topwater bait in the pockets. I caught those two largemouth on it yesterday and a spot on it today.”

Brent Crow of Hartselle, Ala., jumped from 12th place to finish second with 32-0. Michael Johnson of Talking Rock, Ga., rallied from 43rd place with an 18-1 limit to finish third with a total of 31-14. He was followed by Lee and Bradley Dortch of Windermere, Fla., who both had 30-9.

The usual format for a Bassmaster Open tournament has the full field fishing two days, then the Top 12 fishing Saturday to determine the pro and co-angler champions. Due to heavy thunderstorms in the Smith Lake area Thursday, competition was canceled for that day, reducing it to a two-day tournament with the full field of 179 boats participating both days.

Jody White of Gilbertsville, Ky., won the $30,000 Triton boat and Mercury package in co-angler competition with a two-day total of 19 pounds. White started the day in ninth place, but caught a three-bass limit weighing 9-10, the third-biggest bag of the day, to take the title. ?Over the two days, White’s six bass came on three different lures. Two were caught on a green pumpkin Strike King Ocho wacky rigged with a nail weight. Two came on a 2.8-inch Keitech Swing Impact Fat swimbait rigged on a 1/8-ounce shaky head jig, and the other two were caught on a white vibrating jig coupled with a pearl-colored Strike King Menace trailer.

On the co-angler side, Harris took the $250 big bass award with a 4-14 Saturday. White won the $250 Livingston Lures leader award.