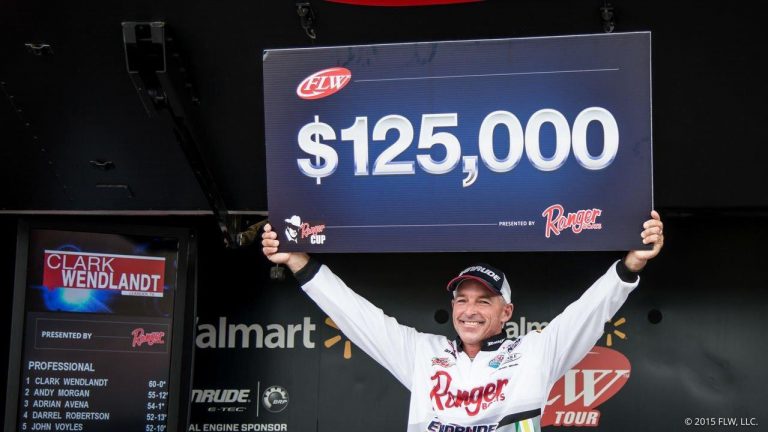 When professional angler Clark Wendlandt of Leander, Texas, was forced to withdraw from the Walmart FLW Tour in 2014 after suffering a heart attack he wasn’t sure if he’d ever be able to fish competitively again. After a few months of recovery and undergoing cardiac rehabilitation, Wendlandt made the decision to return to the Tour in 2015.

His decision was validated Sunday when the three-time Angler of the Year brought a five-bass limit weighing 12 pounds, 14 ounces to the scale to win the Walmart FLW Tour at the Potomac River presented by Ranger Boats. Wendlandt’s four-day total of 20 bass weighing 60 pounds even earned him the win by a 4-pound, 4-ounce margin over Livingston Lures pro Andy Morgan of Dayton, Tennessee, and the top cash award of $125,000 in the internationally-televised event that featured 142 of the best bass-fishing anglers in the world competing in the final regular-season tournament of the season.

“For a long time now since the heart attack I’ve felt fine,” said Wendlandt, who had three top-20 finishes on the FLW Tour this season. “There is some damage, but I went through the rehab and got my heart back up to normal limits. I still love to fish and this season has been really, really good.”

Wendlandt spent the majority of his tournament picking apart key places in a large area in Potomac Creek. Wendlandt said his area had matted grass, docks and shallow wood, but the docks were key.
“I managed my area really well this week,” Wendlandt said. “I was only catching six to nine fish a day. Today, I only caught five. The majority of my fish came on two baits – a white Z-Man ChatterBait with a shad-colored Lake Fork Live Magic Shad and a ½-ounce green-pumpkin 4×4 Bass Jig. I caught a couple on a swimjig and a couple on a tube as well, but the ChatterBait and the jig were more effective.”

Wendlandt may have not even made the top-10 cut to fish Sunday had it not been for an incredible act of sportsmanship by fellow competitor Shinichi Fukae. Wendlandt started day three in first place, but soon experienced mechanical problems that would effectively end his day and force him to get an early tow back to the marina. However Fukae, who was fishing at a nearby location, offered to let Wendlandt use his boat for the remainder of the day – a decision that would allow Wendlandt to finish his day on the water and remain in contention for the win, but guarantee Fukae a zero for the day and a 20th-place finish.

“Without Shin, this win wouldn’t have been possible,” Wendlandt said. “I can’t say enough about him. What he did yesterday, giving me his boat… I cannot thank him enough.”
After this week’s strong showing on the Potomac Wendlandt ended the season ranked 18th in the Angler of the Year Race and qualified for the 16th-Forrest Wood Cup appearance of his career – the first since 2012.

“I love Lake Ouachita and I can’t wait to get there for the Forrest Wood Cup,” Wendlandt went on to say. “I feel like I’ve got some momentum right now and I’m excited for the opportunity to fish for a half a million dollars.”

Overall there were 50 bass weighing 118 pounds, 13 ounces caught by pros Sunday. All of the top-10 professionals weighed in five-bass limits.