Bill Evans has been an avid bass fisherman for more than 40 years, tournament fishing for at least 30 of those years and even qualifying for the prestigious BFL All-American a few times while living in Ohio. He moved out to Washington state about 4 years ago and this week had the fishing moment of a lifetime after catching the new state-record largemouth bass for the state of Washington from Lake Bosworth about 45 minutes from his home in Bothell, Wash.

Evans purchased as small 9-foot, 4-inch boat for bass fishing that he could stick in the back of his SUV for fishing around the house with a 12-volt Minn Kota trolling motor. On August 9th, 2016, his first trip to Lake Bosworth, he skipped a wacky-rigged Strike King Shim-E-Stick under a dock. When the lure settled to the bottom, Evans felt some weight and set the hook.

After a lengthy fight around dock pilings with 8-pound line, Evans put his hands on a largemouth bass that he later had weighed at 12.53 pounds, a weight that would eclipse the former record of 11.58 pounds set back in 1977. 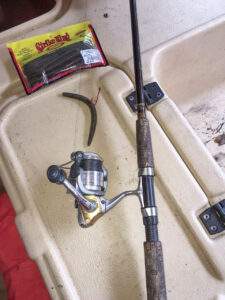 “I have bass fished for more than 40 years, and tournament fished for at least 30 of those” Evans said. “I have caught numerous 10-pounders in Florida. I have even qualified for the FLW All-American a few times. Nothing I have ever done fishing has been more exciting than catching that big bass. I think I’m going back to Bosworth tomorrow. I kind of like it there.”

Evans had to take the bass to the district regional office of the DNR to have the catch verified. He now holds the record at 12.53 pounds.

Check out the full details of his catch and the other 7-pounder he caught that day on the Strike King Facebook page. And also check out our article on the biggest bass ever caught!