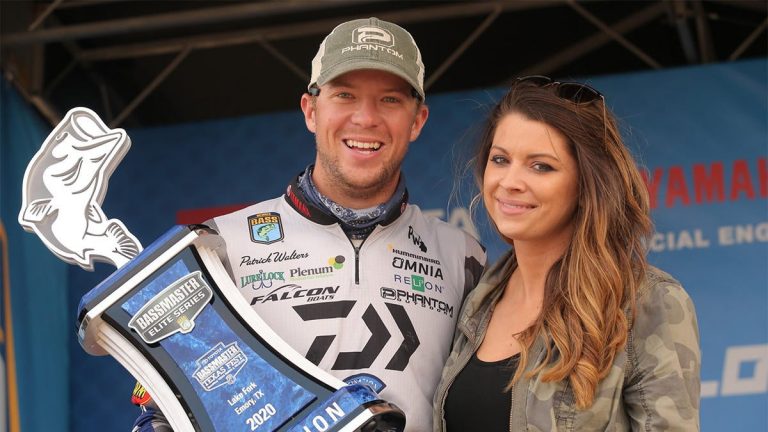 A late-day decision turned victory into a double-dip of tournament stardom, as Patrick Walters of Summerville, S.C., notched a dominant win at the Toyota Bassmaster Texas Fest benefiting Texas Parks & Wildlife Department with a four-day total weight of 104 pounds, 12 ounces.

Walters placed second on Day 1 with 25-14 and took over the Day 2 lead by adding 26-14. On Semifinal Saturday, his limit of 29-6 – the event’s biggest catch – sent him into Championship Sunday with a 25-pound lead.

Today’s limit of 22-10 allowed him to surge across the finish line and secure his spot in the Century Club, which recognizes an angler for catching 100 pounds of fish in a four-day event. Walters won with an all-time Bassmaster Elite record margin of 29-10.

“What a week; it doesn’t seem real,” Walters said. “Everyone wants to catch 100 pounds, and it feels good.”

While his victory was never in serious jeopardy today, Walters found himself a couple pounds shy of his second objective with time running out. A 15-minute flurry in his last hour of fishing delivered three fish that elevated him well past the century mark.

Walters attributes his closing success to a gutsy relocation. All week, he had been targeting suspended bass amid main-lake standing timber in 10 to 20 feet. When he realized his spots weren’t firing, he moved to a small pocket and caught his final three fish around stumps in less than 5 feet of water.

“On Day 2, I caught a 4- and a 5-pounder in there, but I didn’t go back in there on Day 3; I said, ‘I’m going to save it,'” Walters said. “I think it was the wind. We’ve had the same direction wind the last three days and it has blown directly into that pocket.

“All the bait is in there and every single day, it has gotten more loaded. Today, my fish in the treetops would not eat my bait. They’d chase it for 40 to 50 feet and wouldn’t commit.”

Walters’ analysis was more than speculation. All week, he relied heavily on his Garmin LiveScope to monitor fish positioning and adjust his retrieves in an effort to trigger bites.

“I could tell something was not right; they were not eating it,” Walters said. “I said, ‘I gotta leave. I gotta go shallow.’

Walters caught his fish on a trio of jerkbaits; a Rapala Shadow Rap, a Megabass Vision 110+1 and a Duo Realis bait. Varying the selection and trying different colors was essential to bite generation.

Walters said he was very particular about the standing timber he targeted. Recognizing when and where fish were positioning to feed was the cornerstone of his pattern. Realizing that the plan was starting to fizzle proved stressful today, but Walters said he focused on maintaining faith in Lake Fork’s potential.

“All year long, it’s been about staying calm and know that it can happen in five casts. Don’t spin out. Stay calm, keep your head in the game and fish 8 hours.”

Most of the week, Combs has fished big ridges with a chartreuse/blue Strike King 6XD. Today, that pattern produced three of his best fish and the other two he caught on a shad color shallow running crankbait fished over a shallow bar.

“Another angler had been starting on that shallow spot; I would start on another spot and then hit that spot second but I’d never catch them,” Combs said. “Today, he didn’t make the cut, so I went there first.”

“I had a few different special spots; some were docks, some were stumps, one was an isolated laydown,” Yelas said. “Every day, I’d go back and fish these same targets. I cycled through them all four days.

Noting that this spot had a large amount of shad, Yelas said he quickly realized he could leverage this feeding spot each day. He caught his fish on an MGC Tackle spinnerbait with a chartreuse/white skirt and a 3/8-ounce white/chartreuse Z-Man ChatterBait JackHammer with a white Yamamoto Zako trailer.

Clark Wendlandt of Leander, Texas, won the Bassmaster Elite Series Angler of the Year title with 680 points, while David Mullins of Mt. Carmel, Tenn., finished second with 677. Walters was third with 669, Brock Mosley of Collinsville, Miss., was fourth with 669 and Jake Whitaker of Fairview, N.C., was fifth with 663.