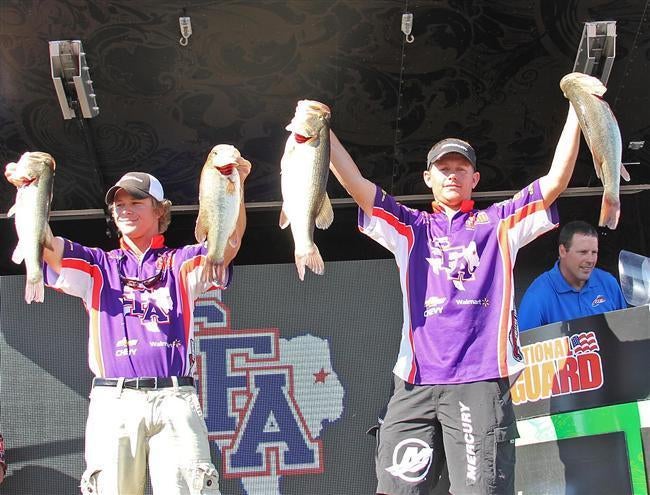 five bass limit set a new FLW Outdoors record for the heaviest one day five-bass-limit catch at a college fishing event, weighing in at 26 pounds, 6 ounces.

They had a three day total of 15 bass weighing 62 pounds, 6 ounces.

For their victory the team from Stephen F. Austin

wrapped in school colors for the bass club and $12,500 for their

school. The team also earned their first berth in the National Guard FLW

College Fishing National Championship which will be held in April 2012.

Upshaw and Watkins beat their closest competitor, the Texas A&M

team of Shafer and Weston, by an incredible 9 pounds, 11 ounces.

â€œThis feels great. To be able to represent our school, our families, the fans,â€ said Watkins. â€œIt’s unbelievable.

â€œThe story of the day was rocks. We started on rocks and

we finished on rocks,â€ Watkins went on to say. â€œTypically in the fall

more fish to feed on. These areas tend to replenish faster so the bass

are constantly coming and going.

crawfish and Strike King Series 3 in sexy shad. We fished a rock bed

back pocket that had a rock bottom.

â€œWe lost a lot of fish today, it was ridiculous,â€ Watkins

Both Upshaw and Watkins graduated this spring but managed

to qualify for the Texas Regional, three times, prior to graduating. The

Bend in March and third at Lake Texoma in May.

chuckin’ and grinding every day. There was a lot of hard work that went

in to this victory. I do have to give props to Texas A&M. They are

excellent anglers and always bring a good game. We knew that we couldn’t

give them any slack.

â€œWe wanted to fish this rocky bank all week,â€ Watkins

continued. â€œWe knew there were some big fish in there and we saw both

Texas A&M teams in there. We just didn’t get the opportunity to fish

in there until today.

â€œThis is something that you just can’t explain, Watkins

went on to say. â€œWe lost a lot of fish today but we caught a lot of big

bass. Times like this are few and far between and you just have to thank

the man above for the blessing.â€

Rounding out the top five teams and also qualifying for the National Guard FLW College Fishing National Championship are:

Heath, and Kennedy Schwartzburg, both of Corpus Christi, Texas, 12 bass,

For a complete list of final standings visit CollegeFishing.com.