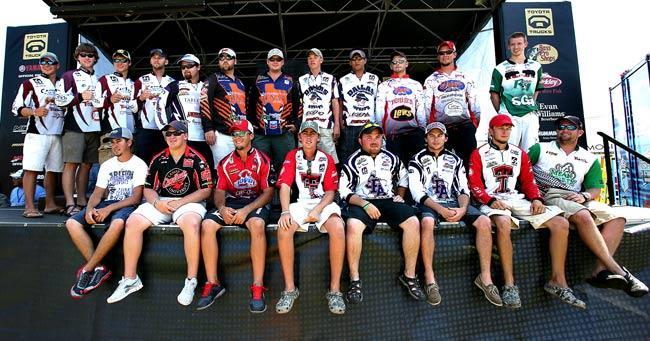 The Texans’ aim was true in the Carhartt Bassmaster College Series’ Louisiana-Texas Shootout on the Red River. Ten Texas collegiate teams combined forces to bring in 61 pounds, 2 ounces and get the better of 10 Louisiana teams that brought in 49 pounds.

With 11 pounds, 4 ounces, Colt Farris and Kehl Robbins of Tarleton State brought the heaviest bag to the scales for Texas. They caught their bass flipping a craw worm in 1 to 2 feet of water on shallow brush.

â€œThey were eating it real good, and we caught about 40 bass,â€ Farris said. â€œBeating Louisiana on their home turf is the best thing you can do. We went on the road and won. Half of the tournament is the rivalry, but it’s just wanting to win. We kept trying to win, and we did it.â€

For Texas, Justin Royal and Taylor Weldon of Lamar University brought in their side’s second-largest bag of 10 pounds, 11 ounces. Royal anchored their weight with the tournament’s biggest bass, a 4-pound, 13-ounce fish.

â€œI caught him on a topwater, a 1/4-ounce Yellow Magic in Tennessee shad,â€ Royal said. â€œIt was the only big one I brought in all day. I had two or three more about that size that came off, and I caught big ones in practice on the same bait. I knew if I kept casting and casting, I’d eventually catch a big one on it.â€

Royal said the rivalry factor added to the tournament excitement.

â€œI have friends who fished from LSU, LSU Shreveport, LA Tech and ULM,â€ he said. â€œIt’s fun to go fishing head-to-head to give Texas bragging rights â€” especially on Louisiana’s home water of the Red River.â€

Tyler Holmes of Texas Tech, whose team partner was Travis McGuire, had a game plan and stuck to it all day, but couldn’t find the bass he was counting on from practice.

â€œWe found a spot in practice with a rock jetty and baitfish balling up,â€ said Holmes. â€œToday, the currents on the river changed, and all the fish in the area scattered. It was fun anyway.

â€œThe great thing is to get involved in college tournaments like this, because if you want to pursue bass fishing as a career, this is an unbelievable gateway. You get so many opportunities. It’s the best way to get your foot in the door.â€

The top weight for the Louisiana competitors â€” 13 pounds, 10 ounces â€” was brought to the scale today by Paul Clark and Brett Preuett of ULM. LSU’s Brett Matherne and Mason McCain brought the second biggest bag of 11-6.

According to McCain, early in the day under overcast skies, the action was strong, but the bite waned as the day wore on.

Matherne said the fishing was â€œfast and furious early.â€ He credited McCain with most of their team’s catch.

â€œWe culled four or five times throughout the day, but we caught most of our nicer, better fish early in the morning,â€ McCain said. â€œWe were fishing a Yellow Magic topwater popper on Duckett Fishing rods around rock ledges and stickups.â€

Joe Landry and Gavin Howard of LSU-Shreveport brought in 6 pounds, 15 ounces taken on topwater frogs.   They made long runs to many spots.

â€œEven if we didn’t win, it’s neat that Louisiana and Texas teams got to compete,â€ Landry said. â€œIt’s good to be here on the weigh-in stage in front of these Elite guys and with such a great crowd. It’s hard to beat this experience.â€