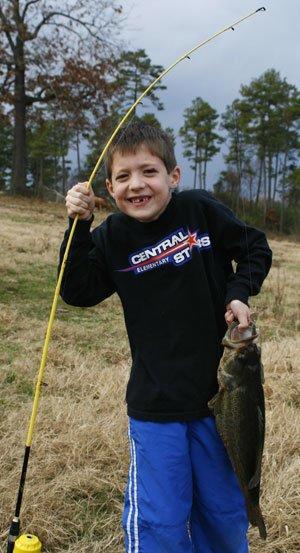 My son Jett has been fishing with me since he was four, so he’s pretty adept with a rod and reel at the age of seven. However he still uses push putton spincast reels or spinning reels and two hands. One of the reasons I taught him to fish with a spinning rod and reel, is because the spincast combos were not very capable tackle for a kid and you’d have as many problems as success.

I let him test the new Wright & McGill Skeet Reese Jr. Champion Kids Combo over the Thanksgiving break. The combo comes with a hat, casting plug, CD of instructions and of course a rod and reel. The rod is a two-piece, split-grip, 5-foot, 2-inch fiberglass casting rod, and the reel is a spincast push button reel, already spooled with line.

I tied on a few different baits and let him practicing throwing it around. The lighter baits cast okay but when I tied on a 1/4 ounce chatterbait, he really started slinging casts out there.

About an hour into our afternoon, he started grunting and his rod was doubled over. He had hooked a nice bass on the mini chatterbait. He fought the fish easily on the rod and reel. I tightened his drag down and we landed the fish without much fuss. The bass was more than 3 pounds, a significant test for the new rod.

It played the fish well, the drag worked well enough and we landed a nice bass on the rod. He was one proud kid and I think part of that is that he felt like he was using one of dad’s rods and not some “kiddie” pole.

The combo pack retails for $39.99. To read more about it, check it out at wright-mcgill.com.