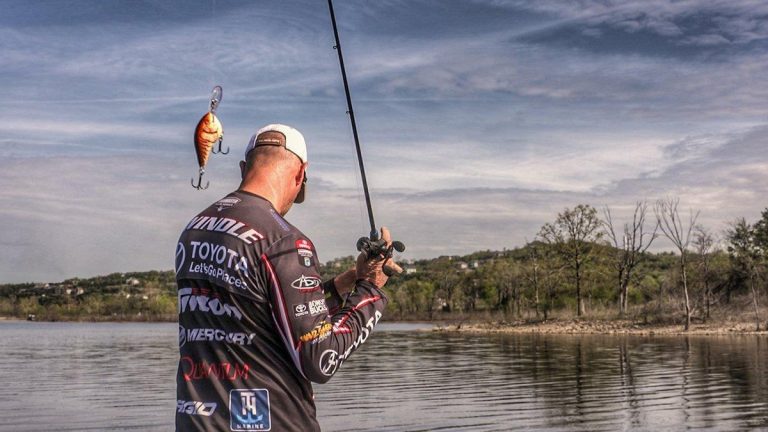 When it comes to Rapala crankbaits, The G-Man is an O.G.

And whether or not you’re of the era that knows “O.G.” means “original gangsta” – and that that’s a good thing – you surely know that Swindle, “The G-Man” to his fans, won Bassmaster’s 2016 Angler of the Year.

“Throughout it all, a Rapala – a DT-6, a DT-10 – if it’s a shallow-crankin’ tournament, ol’ Gerald’s gonna have ‘em tied on,” says Swindle, who’s won two Angler of the Year awards, competed for 15 Bassmaster Classic titles and notched 50 Top 10 finishes in 20 years of Bassmaster competition. “And if they’re deeper? I tell everybody the best all-around deep crankbait ever is the DT-14, hands down. You can’t beat a DT-14 for the depth it runs, what it will achieve and what it will do. It’s an all-around bait for that range. It’s the right size, you won’t lose many on it, and it wobbles right.”

Since Swindle became what he laughingly calls a “free agent” in the hard-bait pro-team market, “Rapala was the only brand I had my eye on,” he says. “Because I want to be with a company that I already win money with, already believe in 100 percent, heart and soul.

“I feel like when I put Rapala on my chest, that’s going to be a big pride thing,” he says. “I’m looking forward to this relationship.”

“We have a stable full of thoroughbreds when it comes to our Pro Staff and I’ve always had the motto of quality over quantity,” Quinn says. “With that mindset, I haven’t had a need to grow our team. But, after getting to know Gerald the last few years, he didn’t give me a choice. G is the full meal deal, incredibly talented on and off the water, and his genuine passion for Rapala/VMC products frosted the cake. He’s one of the very best and will be a valuable addition to the Rapala and VMC Pro Staff.”

While Swindle is looking forward to growing his Rapala collection with newer game-changing baits like the RipStop®, Shadow Rap® and BX® Brat, he says Rapala’s classic balsa baits will always have a place in his boat. The balsa-wood bodies of Shad Raps and DT baits impart action that imitators just can’t match – especially in cold water.

“When it gets to be cold, balsa’s gonna whoop your butt about anywhere you go,” Swindle says. “That’s just how it is. It’s just got the right wiggle.”

“I’ve said this a thousand times in articles,” he continues, “when the water temperature gets below 49, you cannot beat a Shad Rap in the South – period. And a DT is right there with it.”

A proven classic, the Shad Rap is equally effective whether cast or trolled and is designed to be fished from ultra-slow to super-fast speeds with superior results. The DT series of crankbaits dive fast to a pre-set depth and stay in the strike zone longer than any other crankbait on the market. They combine carefully placed internal weights, a tapered fuselage and a thin tail to create the ultimate crankbait action.

Another new name Swindle will be wearing with pride on his jersey in 2018 is hook and terminal tackle brand VMC, a Rapala Respected Brand. Since 1910 VMC has led the market in hook manufacturing and innovation.

“I’ve been using these hooks for a long time, so I know a lot about them and have a lot of trust in them,” Swindle says.

VMC manufactures the highest quality fish hooks, rigs, jigs and terminal tackle in the industry. It creates award-winning products for every style of fishing, many with first-to-market features. With two centuries of experience, the innovative craftsmanship of VMC design shows in every product.