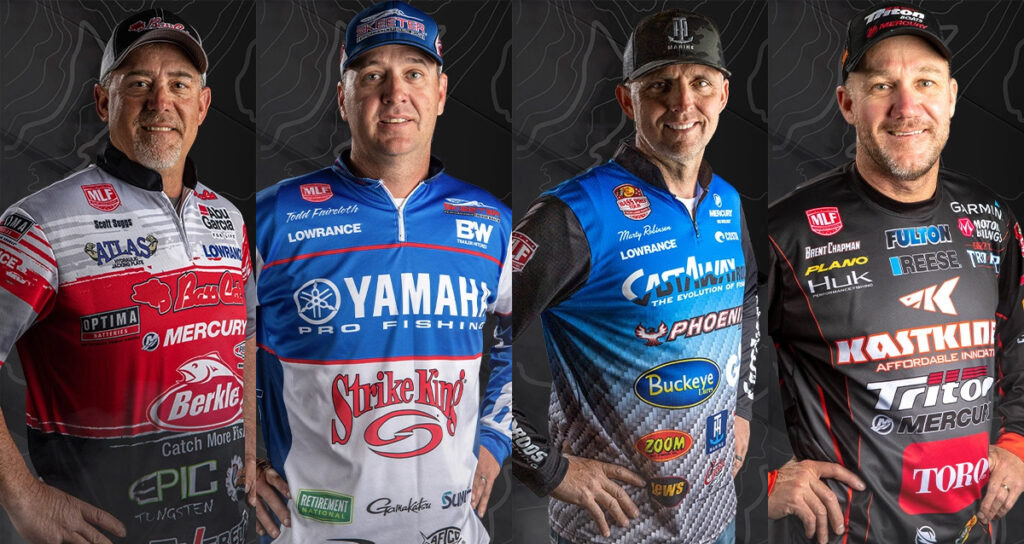 Rather Outdoors is pleased to welcome ten members to the Pro Teams of Strike King Lure Company and Lew’s.  These ten join the ranks of one of the most accomplished rosters in professional competitive fishing.

Team Lew’s is pleased to welcome MLF Bass Pro Tour veteran Todd Faircloth.  The Texan has long been a member of the Pro Team at Strike King, and now brings his six wins and 45 Top Ten finishes to Lew’s.  Aside from the impressive finishes Faircloth has racked up in his 24 years as a professional angler, he also has 17 Bassmaster Classic appearances on his record.

MLF pro Marty Robinson joins the ranks of the Strike King Pro Staff in 2022.  The South Carolinian comes to the team with 23 Top Ten finishes in his career, including two Bass Fishing League wins and top finishes in the Toyota Series.  Robinson most recently battled to a first-place finish at the MLF 2021 Summit Cup on one of his home fisheries in South Carolina, the legendary Lake Murray.

Strike King and Lew’s are also pleased to welcome several newcomers to the professional ranks, anglers who have proven themselves on the water during their first seasons in the majors.  Alabama native Josh Stracner, who recently earned the title of 2021 Bassmaster Elite Series Rookie of the Year, joins the teams, as does 22-year-old Jay Przekurat, who months ago qualified for 2022 Elite Series, becoming one of the youngest in the sport to do so.  North Carolina’s KJ Queen, currently in his second season in the Bassmaster Elite Series, is a tournament veteran, competing locally and regionally since age seven.

Rookie Tristan McCormick, a seasoned competitor and Champion of the 2021 Carhartt Bassmaster College Series National Tournament, has just earned a coveted berth in the 2022 Academy Sports + Outdoors Bassmaster Classic.  Alabama pro Justin Hamner, who cut his teeth battling in Junior World Championships and the Bassmaster Opens, joins Team Lew’s as his first year in the Bassmaster Elite Series draws to a close and having just qualified for the Classic.

Rounding out the rookie class is Illinois native Trey McKinney.  By far the youngest competitor on the Strike King and Lew’s team, Trey doesn’t lack the passion and grit, nor the resume to back up his placement on such a high-profile roster.  Still in his teens, Trey has three career wins and seven Top 10s.  He competes in the Illini Division of the MLF Phoenix Bass Fishing League.

“We are exceptionally proud of our Pro Team, and we invest a lot of time and energy in building the very best,” said Strike King CEO Ken Eubanks. “We are honored to welcome iconic names like Chapman, Suggs, Faircloth and Robinson – gentlemen who have spent decades cultivating this sport and sharing their passion with others.  Likewise, we could not be more pleased to earn the support and trust of a new generation of accomplished competitors.  We are excited about the enthusiasm and innovation they bring.”