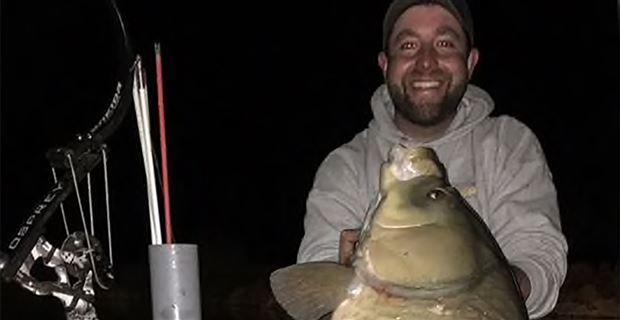 The night of Saturday, January 21 was a special night for John Paul Morris, to say the very least.

While bowfishing for carp and other non-gamefish in a coal strip mine pit in Houston County, Missouri, Morris and his friends noticed an enormous fish cruising towards their highly modified, illuminated fishing boat. Each of the bowfishermen took a shot but were unable to connect, but just when they thought they missed their chance, their luck turned around.

The fish resurfaced behind their boat and Morris was able to arrow the fish. It was a monster buffalo measuring 39 inches in length and 32 1/2 inches in girth. The friends contacted the Missouri Department of Conservation and the fish was weighed at the Lost Valley Fish Hatchery: Its official weight was 57 pounds, 13 ounces. It beat the previous 2015 record of 54 pounds.

The certification paperwork has been sent to MDC’s Jefferson City office. Morris believes the fish could be over 20 years old and its mount just might end up at a Bass Pro Shops or at the new museum and aquarium.

For full details and quotes on this record catch, visit News-Leader.com.