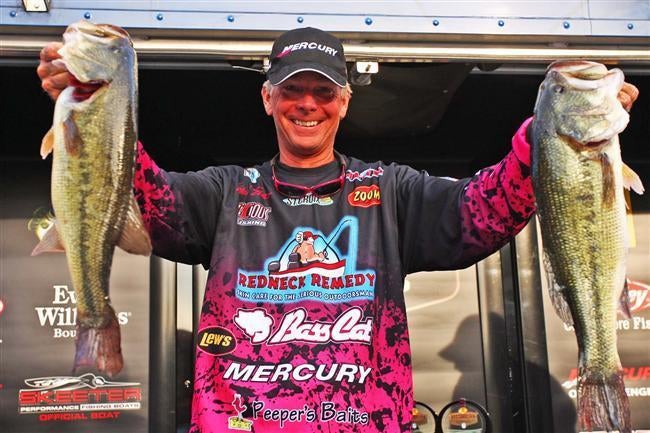 After catching only three fish and sitting in 22nd place on Day One, Short added four keepers and jumped up to fifth place the next day to make the Final 12 cut. The Mayflower, Ark., angler bagged a five-fish limit weighing 15 pounds, 7 ounces today to amass 33 pounds, 8 ounces and claim his fifth B.A.S.S. victory.

â€œI have not fished Table Rock a whole lot, but I have been fortunate enough to fish it when it was really, really good,â€ said Short. â€œWhen I had a bag like that (15-7), people didn’t even want to talk to me. I have also fished it when it was worse than this. There are some of those days when you just absolutely figure it out about what you need to be doing and you are in the right place and you just get it done. Today was one of those days.â€

Short figured out that he needed to keep cranking his WEC E-1 crankbait in a â€œClassicâ€ hue. In practice he figured the tournament would be won fishing deep. â€œThe first day of the tournament I caught those three fish and they were all over the place. I had absolutely no confidence in anything. The second day I went all the way back in Long Creek, and for the last two days I have hit every single piece of wood (mostly laydowns) cranking.

â€œThe key for me yesterday was figuring out that the better fish were in there and I caught them on my little E-1. That gave me the confidence to go in there and stay all day today. I knew that I needed 14 to 15 pounds to even have a shot at winning.â€ Short’s best shot helped him claim the top prize of a Skeeter bass boat/Yamaha outboard rig valued at $45,000 and $9,000 in cash.

Day Two leader Tommy Martin made it easier for Short to climb to the top as the Hemphill, Texas, angler caught only two keepers today and fell into second place with 26-6. Rounding out the top five in the pro division are Robbie Dodson Jr., of Harrison, Ark., in third with 22-13; James Niggemeyer, Van, Texas, fourth, 22-4; and Brian Snowden, Reeds Spring, Mo., fifth, 21-7.

Jacques Fleischmann of Lampe, Mo., took home a Nitro bass boat/Mercury outboard rig worth $35,000 by winning the co-angler division with a three-day total of five bass weighing 11-7. Shawn Temple of Lewisville, Texas, finished as the runner-up with 10-3, followed by Clayton Coppin of Wagoner, Okla., in third with 10-0. Day Two leader Vincent Borrego of Scottsdale, Ariz., blanked today and dropped to fourth with 9-8, while Jim Furr of Hemphill, Texas, placed fifth with 8-15.