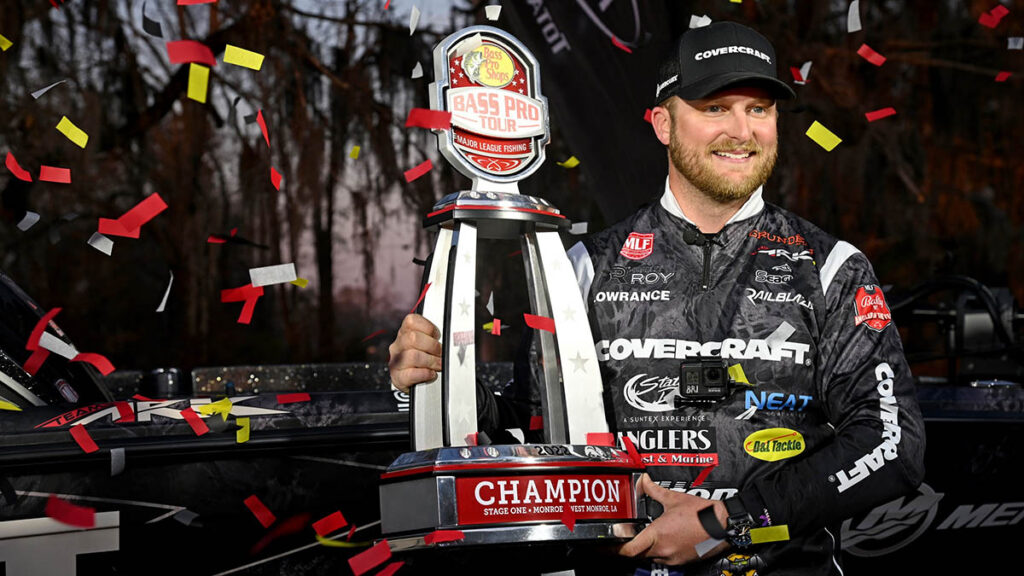 The Major League Fishing (MLF) Bass Pro Tour B&W Trailer Hitches Stage One Presented by Power-Pole in Monroe-West Monroe, Louisiana, won’t necessarily be remembered for the number of fish caught, but it will go down in the history books for the size of the fish caught.

In an incredible day of fishing on Bussey Brake, the final 10 Bass Pro Tour anglers caught 31 scorable bass weighing 163 pounds, 2 ounces – an average weight of 5 pounds, 5 ounces. The catch included three 7-pounders, one 8-pounder, two 9-pounders and one 12-pounder, a remarkable day that had the professional bass fishing world buzzing.

After the final fish had hit the SCORETRACKER™ leaderboard Thursday evening, it was Covercraft pro Bradley Roy of Lancaster, Kentucky, whose name remained at the top. Roy weighed in five bass totaling 26 pounds, 2 ounces, enough to hold off a hard-charging Alton Jones of Lorena, Texas, by a 1-pound, 3-ounce margin.

“Man, this has been a long time coming. God gets all the glory for this one, because I tried every way in the world to mess this one up,” Roy said in his post-game interview. “The third period for me was miserable. I just felt like I was taking blow after blow. Randy (Howell) catches a 12. Jordan Lee was coming – I knew he wouldn’t quit. Then Alton (Jones) – I could see him. I could see (Bryan) Thrift. They were all catching them, and I couldn’t get a bite.

“SCORETRACKER is bad when you’re around the cut, but it was another level this afternoon,” Roy continued. “I just kept looking down at the clock and listening to my official. Every time he’d clear his throat and get ready to speak again my heart would just drop. I’m just so grateful that I had enough weight. To come out on top is pretty special.”

“I think the baby pattern must be the deal,” Roy said, of his new son Lucas who was just born in August. “Everyone always says – you have a new baby, and you win a tournament. Well, we just had Lucas, and now I win. I think there might be something to that.”

For the second consecutive day, pro Randy Howell of Guntersville, Alabama , broke the Bass Pro Tour record for heaviest bass ever weighed in during competition. After earning Wednesday’s $1,000 Berkley Big Bass Award for his then record-setting 10-pound, 11-ounce giant from Caney Creek, Howell backed it up on Thursday with a new record-setting 12-pound, 14-ounce lunker – a new Bass Pro Tour record and a new lake record for Bussey Brake. He caught the fish on a Yamamoto Senko. Howell also won Thursday’s $1,000 Berkley Big Bass Award and earned the $3,000 Berkley Big Bass award for the overall largest bass of the event.

“Overall, I didn’t catch many bass this week, but I made it all the way to sixth place,” Howell said. “It just goes to show you that one flip, one cast can change your whole life. Never give up, fish to the last minute and good things will happen.

“I never really found what I know this lake is capable of, but we ended up a lot better than how we started today,” Howell continued. “Towards the end of the day I was flipping the old (Yamamoto) Senko – and the big one bit. It was a black and blue Senko, with a red Bass Pro XPS tungsten weight – I think the red gives it a little flash – and I threw it on a 7-foot, 6-inch Daiwa Ish Monroe Flipping Stick with a 8:1 Daiwa Tatula reel and 22-pound Daiwa Fluorocarbon line.”

The top 10 pros at the B&W Trailer Hitches Stage One Presented by Power-Pole finished: