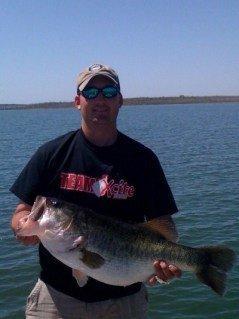 Today is the last day of the Share Lunker program in Texas for 2010, and there was a flurry right at the buzzer. We posted earlier today that a 16 pounder had been caught out of O.H. Ivie. Now a second fish has reportedly been caught from the same fishery and unbelievably by an angler who has already caught a Share Lunker — THIS YEAR!
Wes Pullig caught a 13.24 brute from O.H. Ivie today. To be in the Texas Share Lunker program a bass must weigh at least 13 pounds. To catch a Share Lunker fish is a lifetime accomplishment. To catch two in one lifetime is just unthinkable and to catch two in one season, well it defies all odds. If you added up all the man hours of fishing by the millions of anglers going for bass and then totalled the number of bass over 13 pounds caught this spring, It would still be  millions to one odds.
Kudos to Wes on a great accomplishment and for donating the fish to the Share Lunker program. Way to go!!!
Next