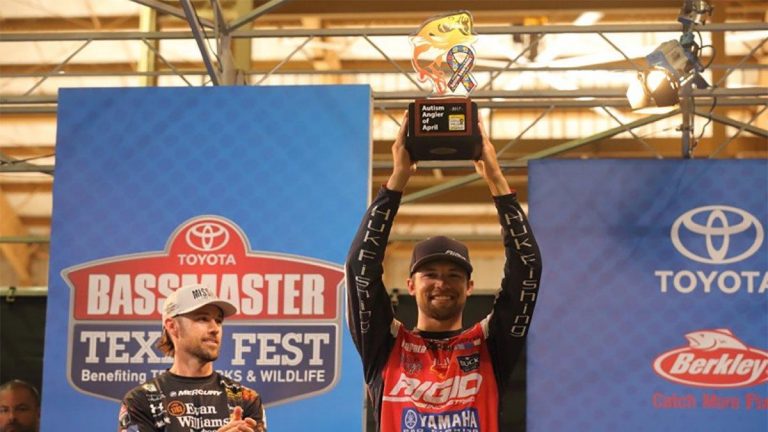 The pros on the Bassmaster Elite Series are again promoting Autism Awareness during the month of April. During their two Elite events, the anglers will be competing for the second annual Autism Angler of April award. The trophy will be comprised of the angler who finishes the highest in the two Elite events while wearing the custom Autism Awareness bracelet. The anglers will also be eligible for bonus points based on Autism social media posts, raising money for Autism charities, and other awareness efforts.

“April has become one of my favorite months of the year because it’s National Autism Awareness Month. All the hard work and momentum we are gaining for this cause is really making a difference,” John Crews explains. “Social posts and raising money for Autism are something we want to add into the Autism Angler of April award. Last year was the first trophy that Brandon won. He then went on to win an Elite and AOY trophy so I know it is good for the rest of your year too,” jokingly says John Crews.

In 2017, the Elite anglers competed for the inaugural Autism Angler of April award that was won by Brandon Palanuik, who also won the 2017 Toyota Angler of the Year award. This year, the winning angler will be awarded a one of a kind Autism trophy made by MTM Recognition and will choose the Autism charity of their choice to donate funds that are generated by sales of custom Autism Awareness bracelets. The bracelets will be available for sale at the two April BASS Elite events expo, missilebaits.com, and mylittlebuddysboat.com. The Autism bracelets will sell for $10 each and 100% of the money will go to an Autism Charity. 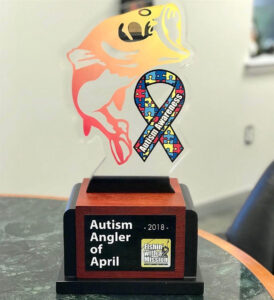 In order for anglers to win this year, anglers that wear the blue wristbands will be tracked by the amount of AOY points they earn in the 2 Elite events in April. The bonus points will be achieved for raising at least $50 for an Autism charity, making at least 3 Autism referenced social media posts during the month of April, and doing any other published awareness effort for Autism. Examples of awareness efforts are wearing an Autism hat on stage during weigh in, wearing a special Autism jersey, or making an appearance at an Autism school. Anglers will receive 5 additional points for each bonus.

Eli Delany, Autism activist and avid bass angler, is the president and founder of My Little Buddy’s Boat Inc., an Autism non-profit. Eli is one of the main people that has pushed the Autism flag into the forefront of bass fishing. He has worked on several efforts such as the Fishin’ With a Mission decal program. Many Elite pros have had the decal on their boat for years.

Remember that April 2 is World Autism Awareness day and April is Autism awareness month. The winner of the Autism Angler of April award will be crowned at the BASS Toyota Texas Fest at Lake Travis in Texas. Be sure to tune into each angler on social media and at the weigh ins to see where and how much they are raising and catching.