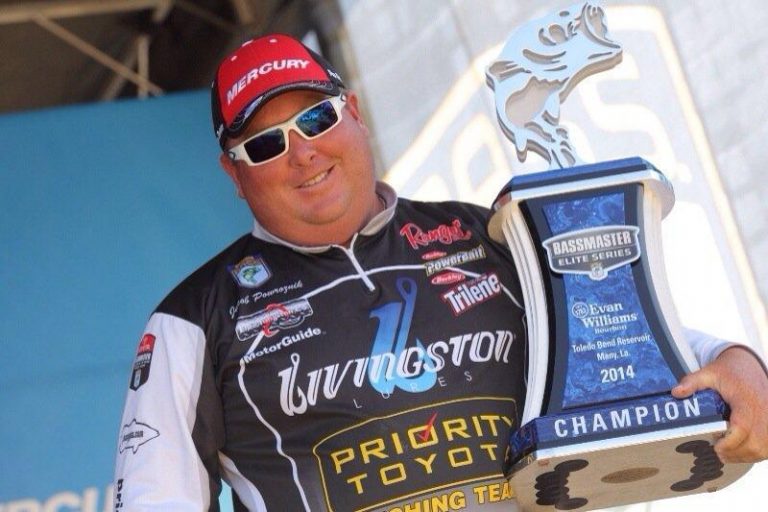 With a one-two, the rookie won.

Jacob Powroznik delivered that punch Sunday in the form of two good-sized bass in the last hours of competition of the four-day Evan Williams Bourbon Bassmaster Elite at Toledo Bend.

â€œI’m speechless. That doesn’t happen very often,â€ said Powroznik as he accepted his first Bassmaster Elite Series trophy after competing in only four events in his first year on the top-level tour â€” and on a fishery on which he had never before competed.

From Port Haywood, Va., Powroznik claimed the first-place prize of $100,000 and an instant-in for the 2015 Bassmaster Classic, his first world championship qualification.

â€œTo get into the Classic feels like someone just gave me a million dollars,â€ said Powroznik after he stepped off the stage and got his voice back. â€œYou don’t get many opportunities to win one of these events. It’s so hard to do. To do it my first year is a blessing.â€

After leading on Friday, Powroznik was stumped in Saturday’s round by a disappearing shad spawn bite that had helped him considerably in the early morning hours of competition. Then he was smoked out of a promising spawning bass area by a controlled burn of Texas shoreline forest. Going into the Sunday finals, Powroznik had dropped more than 2 1/2 pounds behind the leader, two-time Bassmaster Toledo Bend champ Dean Rojas.

But Powroznik recovered nicely. In the final round, he decided to concentrate solely on bass on spawning beds. His strategy worked to the tune of 19-11, and a 79-12 tournament total.

Thanks to his two key keepers, he won by a margin of 2 pounds, 6 ounces over Chad Morgenthaler of Coulterville, Ill., who made a last-hour lunge at the trophy by producing 21-14, Sunday’s heaviest bag of bass. Rising from 10th place, Morgenthaler ended in the runner-up spot with a total of 77-6.

Taking third place was Randall Tharp of Port St. Joe, Fla., another first-year Elite pro who had never before competed on Toledo Bend. Tharp finished with 76-10.

Fourth place was snapped up by Mark Davis of Mount Ida, Ark., at 74-7. The current leader in the season-long points race for the 2014 Toyota Angler of the Year title, Davis sewed up his fourth consecutive Top 5 finish this season.

Moving up from 12th place, Casey Ashley of Donalds, S.C., finished fifth with 73-12. Rojas, the third-day leader, ended in sixth place. His bite died Sunday, and he managed only 10-9. His total was 73-4. Day 1 leader Jared Lintner of Arroyo Grande, Calif., finished in 11th place.

One of Powroznik’s game-saving bass was a 7-13 largemouth, which turned out to be the largest single fish of the day. He spent an hour trying to coax the female off a spawning bed. Determined to not give up, he remembered a tip he’d been given: offer a white bait. He dug deep into his bait boxes and found a 4-inch white crawfish imitation.

With the almost 8-pounder in his livewell, Powroznik said he was able to put the frustration of the previous day behind him.

Although smaller at about 5 pounds, his second key catch was â€œthe highlight of my tournament,â€ Powroznik said. He caught it on his very last flip of the day.

â€œI found it earlier, and it would not take my bait,â€ he said. â€œI eased back in there later, and backed up into some shade. I had 10 minutes left to fish. I hopped the bait one time, and she ate it.â€

The 5-pounder allowed him to cull a 1 1/2-pound bass, giving him the margin of victory.

Powroznik’s go-to lure for spawning bass was a 4-inch Berkley Power Hawg in the green pumpkin or red bug color. He rigged it with a 4/0 Mustad hook and 1/2-ounce Elite Tungsten weight.

â€œIt’s my favorite bed-fishing bait. The thing I like about it is it falls straight down, it doesn’t veer off to the left or right,â€ he said.

The Toledo Bend event was the fourth of nine that will determine the 2014 Toyota Bassmaster Angler of the Year winner. Now with 392 points, Davis leads Lintner by 42 points, Todd Faircloth by 52 and Powroznik by 65. While a 42-point lead is considered healthy, Davis isn’t making room on his trophy shelf just yet. He doesn’t really want to even talk much about it.

Davis is already a three-time Angler of the Year. He first won the title in 1995, the same year he was the Bassmaster Classic champion, a feat not duplicated until 2010, when Kevin VanDam first won the pair of titles. Davis went on to win AOY again in 1998 and in 2001.

Powroznik held his lead in the Bassmaster Rookie of the Year race. Going into the Toledo Bend event, Powroznik had five points on Morgenthaler; Powroznik now leads by six points.

Bonuses that Elite pros earned at the Toledo Bend Reservoir event were:

* Toyota Bassmaster Angler of the Year Bonus of $1,000 to the leader in the Elite Series points race: Davis

* Berkley Heavyweight Award of $500 for the best five-fish limit: First-day leader Lintner for his Day 1 big bag of 25-7.

* Power-Pole Captain’s Cash award of $1,000 to the highest finisher equipped with a Power-Pole anchoring system: Powroznik

* Livingston Lures Leader Award of $500 for being the Day 2 leader: Powroznik

* Rigid Industries Jackpot of $1,750: J Todd Tucker of Moultrie, Ga., for his Day 1 weight of 25-0. Rigid offers a daily prize of $250 to anglers registered for the program who produce a 25-pound or heavier bag. Unclaimed daily awards roll over into the next tournament day of the season; the rollover amount now stands at $750.