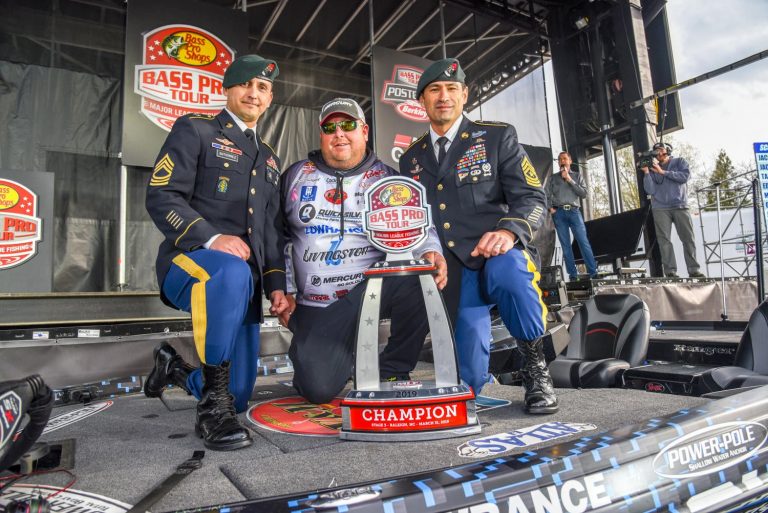 When it all comes down to it, the Major League Fishing ® (MLF) format has always been about identifying fishing conditions on the fly, and making the right adjustments as those conditions change.

MLF pro Jacob Powroznik learned enough from the first fish he saw on Championship Sunday to tell him all he needed to know. That fish, which rolled on a floating worm in the first pocket that the Virginia pro fished on Shearon Harris Reservoir, clued Powroznik in that the lake’s largemouth were in extremely shallow water and spawning.

Powroznik didn’t catch that fish, but it caused him to pick up a wacky-rigged 5-inch V&M Chopstick and start fishing for spawners. It was the right decision: Powroznik connected with 20 fish for 63 pounds, 4 ounces to earn a shiny new red-and-silver trophy and the $100,000 first-place check at the Bass Pro Tour Favorite Fishing Stage Three Raleigh presented by Evinrude.

“I saw that fish swim over on that floating worm, and I knew right then fish were spawning,” Powroznik said. “They were really shallow, and I picked that wacky-rigged worm up right then and didn’t take it out of my hand the rest of the day.”

From sight fishing to casting

Powroznik, one of the most skilled sight-fishermen in the field, dedicated some time early in the day to bedding fish, but then pulled off the beds and started casting to shallow water when mid-day clouds spoiled the visibility. That, too, proved to be a key decision.

“I love sight fishing, but the farther you stay off of them, the better,” Powroznik confirmed. “Those fish were in a foot of water, so they wanted something real subtle. It’s probably a good thing that it got cloudy and I couldn’t see those fish anymore, or I might’ve spent the day trying to get fish to bite sight-fishing to them. It turned out that it was better to cast to points that were a little further out toward the mouths of those pockets instead.”

It was far from a runaway for Powroznik

Jacob Wheeler, who finished second with 59-10, piled up 44-3 through two periods, most of it on a frog. Wheeler finished out Period 2 with an 8-5 that pushed the Tennessee pro to a seemingly comfortable lead of 9-11 heading into the final period.

Wheeler’s frog bite slowed down over the final two hours, though. Powroznik, meanwhile, worked his way through a 32-pound final period to chip away at Wheeler, eventually catching two 4-pounders and a 6-4 in the final hour to take a lead that he never relinquished.

“Obviously, to come up a little short, it always stings a little bit,” Wheeler said. “The conditions got right for a topwater and I got dialed in on that and took the lead. I knew at Shearon Harris you had to keep catching them, because you know there’s really good fish to be caught. Ultimately, I could sit here and complain, but there are plenty of other guys who would like to be in the position that I was.”

Rounding out the Top 10

Moving on to Stage Four

The 80-angler Bass Pro Tour field will have a short rest week before returning to competition April 9-14 at Lake Chickamauga in Dayton, Tennessee, at the Econo Lodge Stage Four Dayton presented by Winn Grips.

Takahiro Omori (3rd/52-11) – “Well, the most likely thing was in the afternoon I was in the right area. In the morning, I wasted a lot of time, out in the mud. Once you get in the right area and get hooked up with the right bait, you know you’re going to have fun. It’s springtime, so it’s good.”

Edwin Evers (4th/43-13) – “I’m just on a little roll, man. I’m really excited about Major League Fishing, and it’s kind of reinvigorated my career. I’m ate up with it right now. I’m enjoying it again and it’s been a long time since I’ve enjoyed it. I’m just having a lot of fun, making good decisions, and having fun catching them. It’s humbling to be able to have three Top 10s like that, I don’t know what to say about it. I’m just going to be thankful for three great tournaments, which I am.”