As anyone who was young or young at heart during the 1980s knows, there’s something thrilling and culturally significant about a professional wrestling match. Whether you think it was real or fake, staged or brutally honest, you have to admit that the big events could rile up even a comatose patient in a hospital bed.

Pat Rose has been there, done that and has the bruises to show it. He traveled the country kicking butts and taking names and along the way became a nine-time champion. But now he gets his competitive thrills through tournament bass fishing.How has he managed to slow down from the 100 mph thrills of jumping off the ropes and crushing skulls to the more leisurely and pastoral pastime?

It’s a big change, but not that big of a change,” he said. “After beating my body to death for so many years, sure, it’s more relaxing, but you have to be in just as good shape. After eight hours of chunking and winding, I really feel it, especially in my forearms and my lower back, which stems from a pro wrestling injury. I’m two years away from 50, so I have to work to keep up with it.”

He’s fishing the Bassmaster Southern Opens and a division of the Weekend Series, this year, so time is tight, but Rose agreed to answer a few questions about how the two sports compare:

Have you seen the Mickey Rourke movie The Wrestler?

If they ever made a movie called The Fisherman-Wrestler, who would play you?

Oh man, that’s a tough one. Maybe Mario Lopez. The girls all love him.

What is your number one goal as a fisherman?

I know the economy is tough right now, but I’d like to get a boat sponsorship. I really feel that I could represent someone well.

If you could have one more major achievement, either in fishing or wrestling, what would it be?

At this point in my life, I’d like to win on one of the major tours.

What is your favorite body of water?
It has to be Guntersville. I finished 3rd there last year and caught my biggest fish, a 9-04 largemouth. 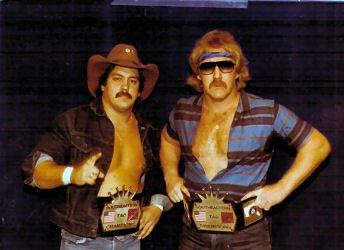 What was your favorite place to wrestle?

The Superdome in New Orleans. Back when the Rock and Roll Express and the Midnight Express were red hot I wrestled there mid-card. It was an anniversary show and the place is so big that you had to go to the ring in a golf cart. I was in the back lacing my boots up and I heard a snapping noise in my ear. I looked up and it was Muhammad Ali. I shook his hand, got my picture taken with him.

What is your favorite way to catch ‘em?

I want to say a jerkbait. My buddy and mentor Steve Daniel taught me how to fish it and got me a rod for it, the Steve Daniel Special. It has to be the right time for it, but when you know it’s right, it’s great.

Which wrestler would be the best fisherman?

Do you remember an old dude named Black Bart? He wrestled NWA for years. He wore a big black cowboy hat and chewed tobacco and always carried a rod and reel in his truck.

Which pro angler would be the best wrestler?

You know Steve (Daniel) was a real wrestler, a shooter, at UTC. But I’d have to say the G-Man, Gerald Swindle. He’s got the talk. You know he’s a heel at heart.

Who has a more grueling lifestyle, pro wrestlers or pro anglers?

Pro wrestlers, the reason being that it’ a 365 day a year job. It’s not seasonal. I once went two years without a day off. Thanksgiving, Christmas night, those cards were big. I remember back on Thanksgiving night the Omni in Atlanta would sell out.

What is your worst lingering wrestling injury?

My neck, my left shoulder … do you want me to keep going?

What is your worst fishing injury?

I was cleaning out my tackle bag and got a hook through my thumb. They gave me a shot to deaden it and then the nurse took out a pair of needle nose pliers and yanked it out.

As a tough guy and former wrestler, is there any angler who intimidates you?

No doubt it’s Rick Clunn. I wouldn’t know what to say to him.