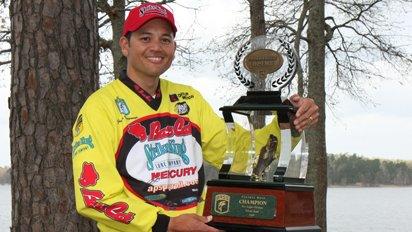 When James Niggemeyer left the dock this morning for a 3 ½-hour fish-off against Texas’ Jerrel Pringle, the Bassmaster Elite Series pro worried heavy cloud cover would kill his sight-fishing bite and the Toledo Bend Bassmaster Central Open win would slip away.

Officials kept the two pros, who tied for first place with 37 pound, 14 ounces during what was supposed to be the final day of competition and were forced into a tiebreaker Sunday, separated when they returned for the 11 a.m. weigh-in.

Niggemeyer had five fish, but he wasn’t very confident.

“I just caught five fish,” he said. “They’re not big. I caught the fifth fish 10 minutes before I had to leave.”

When the Niggemeyer and Pringle met at the scales, their fish were in solid bags so there would be no way to know what the other had. Pringle won a coin toss to determine who would weigh first, and he deferred.

Niggemeyer’s five fish were placed on the scales, which finally settled at 14 pounds, 1 ounce for a three-day total of 51-15. He looked as if he were holding his breath as Pringle began placing his fish on the scales.

That sealed Niggemeyer’s victory, and he looked shell-shocked as he was handed the Bassmaster Central Open trophy.

“I can’t believe it,” he said of his third BASS win. Niggemeyer also has a 2003 Bassmaster Southern Open win on South Carolina’s Santee Cooper and a 2005 Red River regional Bassmaster Weekend Series victory in 2005.

Niggemeyer stuck to sight fishing throughout the tournament, but had to adjust to win the fish-off.

“I ran down to go look for a 5-pounder I left on the bed yesterday, and it was gone,” he explained. “The fish just weren’t where they were the past couple days, so I eased farther back (into the creek) where I hadn’t been.

“Every now and again I’d come up on one.”

The only problem was that the fish weren’t exactly ready to eat.

For his part, Pringle said the fish in his area on the north end of the reservoir seemed to have moved and stained water made it difficult to find them.

“The fish had moved back (into the ditches he was fishing), and they weren’t moving,” he said. “I’m sure they were on beds, but I just couldn’t see them.”

He said hindsight proved that he should have abandoned the area he fished the first couple of days.

“I had stuff I could get to (from the landing) in 10 minutes, but I thought if I caught three fish like I had been catching and he didn’t catch them I’d have 12 to 13 pounds and that’d be enough,” Pringle said. “I probably should have gone to (the close fish).”

The dramatic ending to the tournament, which began with the first day of competition being cancelled due to safety concerns surrounding high winds, resulted in Niggemeyer pocketing a $51,000 check. Pringle received just less than $23,000.

Niggemeyer said the win was critical on so many fronts.

“Financially, this came at a wonderful time,” he said. “I had a rough year last year on the Elites.”

It also sets him up to begin his Elite Series year, which begins this week on Texas’ Lake Amistad, with a lot of confidence.

“It’s a big shot in the arm,” Niggemeyer said. “I had been thinking about what I needed to do to get back to a place where I was confident fishing and the results were there, too. This really helps.” Looking back over the past three days, however, he said he could identify one key catch that made it all possible.

“If I hadn’t caught that 8-pounder yesterday, this wouldn’t have happened,” Niggemeyer said. “I consider that fish a gift from the Lord.”