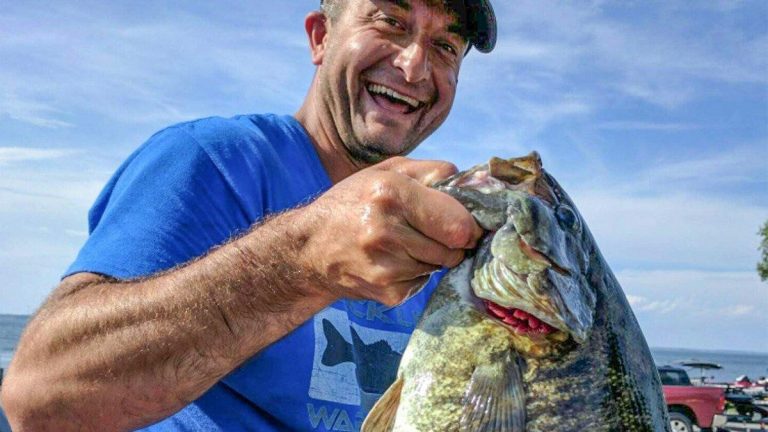 Patrickâ€™s smallmouth was initially reported as 8.15 pounds. The tournament scales were sent out for a recertification due to the possibility of a state record fish. After getting the recertified scales back, Patrickâ€™s fish actually was found to weigh in at 8 pounds, 4 ounces. This tied the New York state smallmouth record set in 1995 by Andrew Kartesz. The fish measured 21 1/2 inches long and had a girth of 20 3/4 inches around. After weighing, measuring and photographing the fish, it was successfully released back into the river alive to continue to grow.?

Patrick will be receiving from the New York State Department of Environmental Conservation a custom engraved plaque, certificate of achievement and a lapel pin. Pictures of his record fish have been circulating around major sources on the Internet. He will be featured in an upcoming article from FLW Outdoors.

Patrick ended up second in the tournament and received the big bass award from the Cape Vincent Chamber of Commerce.

The fish was caught around 7 a.m. on Sunday morning August 28, 2016 in the St. Lawrence River near Cape Vincent. At the time the conditions were calm with overcast skies and 70-degree air temperature and a water temperature of 74 degrees. Patrick saw a large fish arch in 35 feet of water on his Humminbird fishfinder and was able to mark the arch and drive back over it, enabling him to catch the fish using the dropshot technique. Unfortunately, he did not have his GoPro camera turned on during the catch. Patrick used T-H Marine G-Juice Livewell Treatment and ice to make sure the fish would stay healthy during the day.