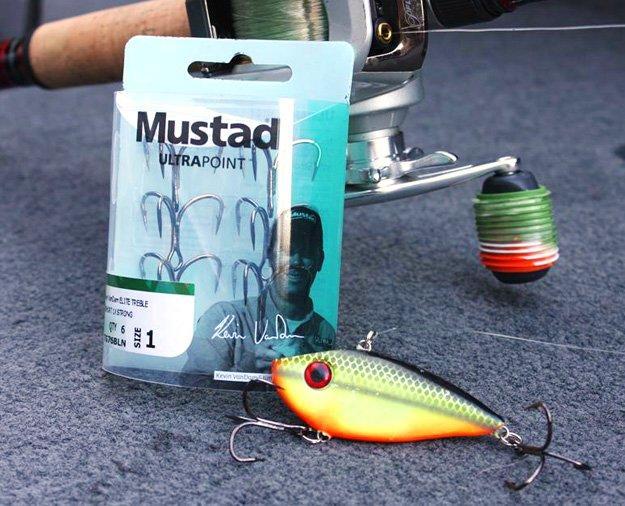 It’s not often that a hook can generate the kind of press that Mustad’s new offering has.  Perhaps it is the hook itself, or perhaps it is the name of the angler associated with them, or both.  Whatever the reason, Mustad and 2010 Bassmaster Classic Champion Kevin VanDam have produced a treble hook that lives up to the hype it generated.

There are two sure-fired ways to tell a product is resonating in our industry.  One is that product turns are steady, and finding stores backordering product are evidence that people like it.  A second and possibly more subtle, yet positive way is to find out that anglers on the pro tours are secretly buying the product; even if they are not sponsored by the company.

In the case of Mustad’s KVD Elite Series Treble hooks, both of the above would be the accurate indicators.  VanDam has taken his prowess with a crankbait of any type and built a reputation of dominance in any tournament that the baits are a factor.  Whether it is a big lipped diving plug on offshore structure, or a lipless crankbait around grassy flats; KVD spells danger.

As if he needed another weapon in the crankbait wars, Mustad gave it to him with these hooks.  At least the company was somewhat merciful to the rest of the fishing world in that they decided to sell them on the open market where the rest of us can get them; when they are not oversold, that is.  We got a few chances to test some of the samples and for those of you who have been able to get your hands on some; in the immortal words of Napoleon Dynamiteâ€¦  â€œLucky!â€  For those of you who haven’t, here is what you’re missing.

We tested the KVD trebles on a number of hardbaits; lipless crankbaits, diving crankbaits and even jerkbaits.  We tested them in water temps as low as 51 degrees, to the upper 60’s, and the result has been the same.  What we found is that when a fish bites these, they become impaled; the term stuck just doesn’t do it justice.

These hooks are touted as 1X strong and 2X short, meaning the wire is one time heavier than standard wire, and the shanks are two times shorter than standard trebles.  What does that mean for the angler?  It means that there is finally a treble hook that will stand up to the low stretch power of braided and fluorocarbon lines, and allows the angler to upsize hook size without tangling the hooks.

VanDam has reported that he is able to upsize at least one size on most of his lures, and in some cases even two sizes.  His venerable 1/2-ounce Strike King Red Eye Shad comes with size four hooks out of the package, he upgrades to a size two.  In the case of the new Series 6XD crankbaits which are packaged with a size two, he increases two sizes to a 1/0 when his is fishing for better than average size fish.

We have experienced the ability to upsize our hooks on all of our baits, and have seen that even with the increased hook gaps, there is no tangling of the hooks under a crankbait.  One thing we did notice is that on some jerkbaits or topwaters; especially slender minnows and small poppers, upsizing the hooks to these baits can cause issues.

We tried them on an Ima Flit 120 during our test of that bait, and upgrading from a six to a four actually made that bait sink rather than suspend.  The same can be said for the Lobina Lures Rico, trying to upsize the hook on that made the bait unbalanced and didn’t work exactly right.  We still changed them out for testing, but stayed with the original spec size, and the baits returned to normal attitude and action.

One other thing we did notice, and love, with these hooks is how solidly bass are hooked on them. VanDam claims that the wide gap shape of the hook actually rolls the fish into the hook on a hookset because the pull point and hook point are on the same plane.  With round bend hooks, we’re told, the hook point and pull point are actually on different planes, and therefore the hook point supposedly turns away from the fish.

While we don’t have any actual science to back this up, what we did notice is that there has yet to be a fish that we didn’t have to get the pliers out to take the hook out of.  We have even had several of the fish that the hook point entered the fish from the inside of the mouth, turned, and re-penetrated on the outside; those required more than pliers, we almost had to call in a surgeon to get our hooks back.

Because of Mustad’s Ultra Point technology, these hooks are really durable as well.  When banging around rocks and stumps, we have yet to have a hook point roll over, which is better than a long slender point that will bend and roll over more easily.

They are available in sizes No. 6 to 3/0 for big swimbaits, and come in six packs and 11 packs.

All we can say is that the Mustad KVD Elite Series Treble hooks so far are all that VanDam and the company have claimed them to be.  So much so, that many of us are contemplating changing all of our hooks out for these. To order these  click here.
To read more about Mustad and their hooks click here.
Next